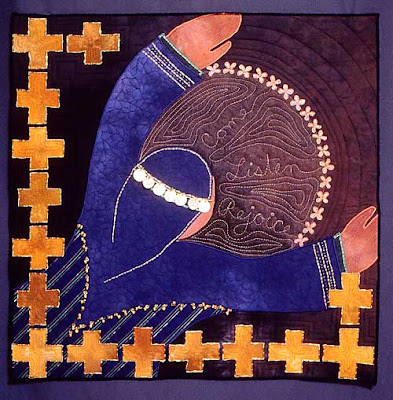 This wonderful depiction of Anna is a quilt. See more about the artist, Larkin, here. Can you see the words? "Come, listen, rejoice"?

The following is a monologue I will be sharing tomorrow, in costume, at church. Please forgive my fumbling attempts at Hebrew.  Wrote it out phonetically so I'd not fumble too much.

Anna
Can you take a moment to hear the story of a widow who has seen much?

I was not always this old woman you see today. I was young once! And I was beautiful. At least Levi told me so.

After all these years, I am not lonely for him, but his memory is bittersweet, even now.  We were married with the hopes that all young couples have. Happiness, honorable work to do, children, long life.

Well, I am certainly blessed with a long life!

But poor Levi was not. He died so very young, and we had no children.

Oh, how lonely and frightened I was! It is not easy for a woman alone. Many widows beg or work as prostitutes to survive. Once it was suggested to me that it was a profession that would be an easy way, since I was still quite young.

I refused, and I prayed hard!

I determined to seek the face of Hashem -- the Holy One-- in the Temple courts. So I went there and I stayed, pouring out my heart to the Lord.

I will speak the truth about this...at first, what came out of my heart was mostly anger and sorrow.

Why did the Holy One of Israel, the One who holds us in the palm of His hand, allow this to happen to me? Even though only a girl, I had listened many times as my father and his friends discussed the scriptures. Sometimes I suspect that father knew I was there, just around the door, but he never spoke of it. He was a kind man and he knew I had a longing to know of holy things.

So I know from the Psalms of David, a man after God's own heart, that the Lord is not angry at us for honestly speaking to Him. So I poured out my anger and pain and fear.

I felt so far from the Lord Almighty. Even though I was angry, sometimes I would look towards the beautiful temple and long to approach, to reach closer to the presence of the Lord. I sometimes envied the men who went up to a higher courtyard, a place where they could watch the priests going about their holy work.

Once I cried aloud, causing those nearby to stare, “O Maker of Heaven and Earth, can you not see me, your daughter, the creation of your hands? Can you not hear me? I cannot bear this misery!”

But over time my heart softened and my prayers began to focus on others.

The court of the women was as far as I was allowed to go, but that did not mean only women were there. Many passed through this court every day. The temple treasury was in the women’s court, and many rabbis also taught there on the steps.

I was moved to pray for those who came to the temple courts. And when I did, the Lord revealed the focus of my life and the purpose of my sorrow. As I looked at those who came, whether to celebrate a feast, for purification after childbirth or the dedication of a firstborn son, I was given words of prophecy from the Almighty Himself! Because I had no other responsibilities, I heard the voice of God often.

And I was cared for. Some brought me food, and I was even given a place of shelter, provided by those who also loved the Lord.

The pains of my own soul allowed me to see suffering in the faces of others, and I often spoke words of comfort.  Perhaps because I had never borne a child, it seemed I was drawn to the women with their little ones, and I tried to bless and pray for as many of them as I could.

There was someone I saw often at the temple area. It was Simeon. He also was very old, and like me he heard the voice of God. He longed to see the Coming One.

He always treated me with respect. Though it was unusual for a man to speak to a woman not of his family, because of our callings we occasionally spoke briefly. One day he quietly shared with me that the Lord had told him he would see the Lord’s Anointed with his own eyes!

A hope was born in me. Simeon was not that much younger than I. Might I see the promised one too?

One morning I was compelled to walk to the steps where I could see people approaching. There they were….something drew my attention…a kind of knowing inside. Then I first saw the baby Yeshua and Joseph and Mary. I saw Simeon and I heard----he was prophesying over the child with great joy--and I knew!


I waited until Simeon had finished blessing them, for that was proper. Trembling, I approached, spoke to them and looked at the tiny baby. It was the Lord’s Christ!

It was the consolation of a mother's heart. I, who never had the privilege of a child of my own, had now seen The Child, the One for whom the whole world had waited.

Yes, the Lord God had seen me, all the long years alone, praying and seeking to know the Holy One. He has blessed me beyond measure, and I cannot be silent!

Blessed are you, Lord our God, King of the Universe,
for keeping us alive, taking care of us, and bringing us to this time.

My life is complete, my suffering insignificant and my joy overflowing!
Posted by Dorcas (aka SingingOwl) at 7:17 PM

I wish I could be there to see you in the morning! There is something very special about Anna. I'm glad you are giving her a voice.

Perfection! What a wonderful gift your congregation will have, my dear sister! Like Ruthie, I wish I could be there tomorrow to witness the Word Made Fresh.

Blessings to you and to your congregation!

That was very touching, and I'm sure no one will mind your faltering Hebrew if you just say it clearly and with confidence :-) It sounds very "true to life." Your congregation will be blessed by it, especially those who are struggling with faith amid difficult situations.

May I make one tiny suggestion? Anna would not have said "Yahweh." Rather, she would have used some kind of divine circulocution to avoid pronouncing the sacred NAME. How about "HaShem" (the NAME), "heaven," "the Blessed," or even "the Lord"?

May you enjoy a blessed Feast of the Holy Name of Jesus!

love this :) and the quilt of Anna is amazing :)

This is WONDERFUL! And so is the quilt - just beautiful.

*tears*
Oh, that is wonderful. Thank you so much for sharing that. I know it blessed your congregation.

Before Anna entered the sanctuary was dark. Then Jewish music started...wonderful song called "Adonai" and the lights on the platform gradually rose.

Thanks, you guys! There is something about Anna. And when I was "giving her a voice" this morning I really could feel for her and identify with her in some way.

I thought about that "Yahweh," in there, but I didn't have an idea of what to say...was already saying Lord an awful lot. ;-) I am not sure what I actually said, since I did not memorize these lines--don't think I said a name for G-d though. :-D

A few people got teary-eyed, and when you are doing drama that HAS to be a good thing.

I told myself that if I didn't pronounce the Hebrew right, there was no one in my congregation who would know...since I have no scholars in my flock. LOL! But honestly, when I prayed it...it may have been the best moment! I sounded confident and thankful and full of joy, just as I had prayed would happen.

Hashem is the word my Jewish students use wherever we would use God. They tell me that Yahweh is some Christian thing.

Hashem. I will remember that in future. I think I'll be doing more of these monologues. This is the second, and people seem to have liked them.

My daughter is named after this Biblical woman. Wonderful monolog.

I saw this quilt in person when it was shown at in my state. It is traveling with the Women of Biblical Proportion show.

I love the name Anna. One of the many biblical names my mother *could* have chosen instead of the one she did. ;-)

I love this woman's quilt work!