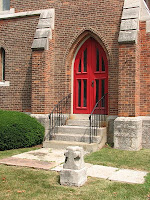 Dee Anna stood just outside the red doors on the stone steps of St. Barnabas Episcopal Church, sniffing the savory aroma that wafted down the street on a film of smoke from somewhere downtown.  What was that?

It had been Dee Anna's first time attending the local ministerial group meeting, and she was feeling relieved and pleased with how it had gone.


The priest at St. Peter's Roman Catholic Church, Father Thomas O' Brien, had called her the day before to make sure she had received an invitation.   She had smiled to herself to hear his slight Irish brogue.  An Irish Catholic priest.  Was he for real?

He was, as it turned out.  He was short, round, and white-haired with an engaging smile and an affable manner. He had arrived a few seconds after Dee Anna, so he had introduced himself again, and after Dee Anna had taken a quick look into the church's beautiful old sanctuary, he had accompanied her down narrow stairs to a classroom off the kitchen.  There they had found the church's rector, Father Joseph, setting a coffee carafe on a polished wooden table beside some fragrent scones  and a dish of jam.  He was an elderly man, gracious and serious of manner. "He matches the buidling," mused Dee Anna, as she told him how lovely she found the  polished pews and stained glass.

"We are one of the oldest churches in the area," Father Joseph said with a smile.

The local Missouri Synod Lutheran pastor, Jeff Wilson,  and the Baptist pastor, Rodney Brach, both middle-aged, bearded and balding, had come in together, talking enthusiastically about deer hunting somewhere. Dee Anna wondered how they would feel about having a woman joining them in the group.  Next was the ELCA pastor, David Davison, whose contemporary church building was just a block away from the other Lutheran church.  He was a young man and had mentioned to Dee Anna that Redeemer Lutheran Church was his first charge.

They had chatted for a few minutes, sipping coffee and munching on the scones, which Father Joseph had made himself.   He had asked each of them to introduce themselves, and he had welcomed Dee Anna to the community.  Dee Anna knew there were at least two other churches whose pastors were not present, an independent church called "The Gathering" and a tiny Methodist church out in the country somewhere.  The Methodist church's pastor was a woman named Rosalie, someone Dee Anna knew slightly from her days at Eastside Methodist.  She had watched the door hoping Rosalie would arrive.  She hadn't.

After a short devotion from David, the meeting mostly was concerned with various plans for the upcoming Advent and Christmas season.  It was Monday of Thanksgiving week and Father Thomas had thanked them for the excellent response gathering food for the community Thanksgiving basket give-away.  Father Joseph, and Pastor Rodney were going to meet him on Tuesday at St. Peter's and they'd deliver them.  The Episcopalians were making progress on the annual drama, and they were all invited.  Pastor Jeff reported that the Lutefisk supper at St. Paul's Lutheran had gone well, as usual.  The usual kind of discussion, Dee Anna mused.  This was going to be fine.

Now she stood with Father Thomas, who had asked that she call him Tom, on the church steps.  Pastor Jeff and Pastor Rodney came out together and Jeff sniffed the air appreciatively.  "Ah, smell that?  The Chamber of Commerce is at it again."  "Just in time," replied Rodney. "It's almost noon."

The men all looked at her in surprise.  "Oh, I guess you don't know about the annual burger bash downtown," said Tom, grinning.  "You don't want to miss it."  They all stepped down onto the sidewalk.  "Come on, Dee Anna, let me show you how you how we do things up here in the north woods!"


Squeezing his portly frame behind the wheel of a Volkswagon Jetta, he said, "Hop in and I'll drop you off back here in half an hour."

They drove the few blocks to downtown, but long before the source of the smoke was visible, Dee Anna saw a long line of people.  Many of them, mostly men, were dressed head to foot in blaze orange.  Those who weren't usually wore at least an orange hat.  Most of the men, like the two hunting buddy-pastors she had just met, were bearded.

Dee Anna knew about deer hunting, and she remembered her father once bringing home a big doe that he took off to the butcher.  She hadn't liked the venison that resulted.  And she had never imagined anything like this.  She turned to Father Tom, who was grinning broadly.  "What in the world is going on?  This is the biggest bunch of people I've seen in one place since arriving in town!"


He found a parking space in front of the Kwik Trip and beckoned as he opened his car door, "Come on, you don't want them to run out before you get one!  This is an event in Little Big Foot, Dee Anna."

"Get one?  One what?" she asked a little impatiently as she followed behind him and got they got in line behind an elderly couple holding hands, both dressed in orange sweat suits.  "Is it venison?  Whatever it is it sure smells good."

"Hey, Pastor Dee Anna," called a voice from the line ahead of them, "I'm glad you didn't miss this." Tommy Halvorsen waved at her happily from about 40 feet away, and she waved back, remembering the scent of wood smoke when she had first met Tommy and his wife, Brenda.  She also remembered the sack of venison summer sausage he had given her after her first service at North Woods Chapel.   It was still sitting unopened on the second shelf of her refrigerator.

"Hi there, Tommy," she called, hoping he wouldn't ask her about it.  She noticed Brenda was off to the side with a group of women, and then she saw the Halvorsen kids in front of Tommy.  "Hi, Pastor," yelled the oldest one, a boy about twelve years old."

"Hey Jeremy, how are you today?" she called. " How come you aren't in school, anyway?"

"School?" He grinned, "It's hunting season, Pastor.  Nobody goes to school during deer season."

Dee Anna looked questioningly at Father Tom.  "Really?  I did not know that.  Madeline said something about being out of school.  She is over at a friend's house today, but I somehow thought it was just something the elementary school was doing or..."  Tom nooded, "Yep, that boy is correct.  No one goes to school."

The noon whistle went off, startling her.  Tom grinned and added, "Lunch time in the North Woods.  And everybody that can manage it takes off of work too.  The paper mill lets everyone off a bit early today so they can come down here for the burger bash."

They had been moving forward as they talked, and now Dee Anna could see that a large area of the main street was sectioned off with ropes.  A vinyl banner stretched from one corner to the other.  "Welcome to the Little Big Foot Burger Bash"  it read in orange letters.  A group of about ten men wearing blaze orange hats and long white aprons that advertized the Chamber of Commerce were gathered around several smoking grills .  There was lots of laughing and loud talk among them, and one swore loudly as he flipped a burger too briskly and sent it sailing off the grill and into the street.  Along one side was a tent, and Tom told Dee Anna that it was a beer tent.  "A beer tent?  In the middle of the street?"  Dee Anna shook her head as loud polka music suddenly blared from the tent.  "I've never seen anything like it.  It's a big block party."

Moving a little closer she saw a long table with mustard, ketchup, bowls of onions and pickles, and cans of soda.

"Hey, Father," called one of the men at a grill, "Who's that beautiful redhead you have with you?"  He laughed loudly and leered at Dee Anna.  "Too much time at the beer tent," she muttered.  "He's harmless," laughed the short little priest, moving to the table and picking up a paper plate for each of them. 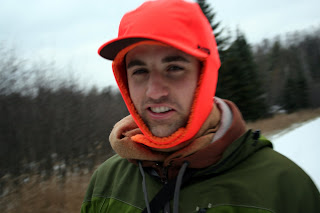 "Step right up, sweetheart," called the man. "Grab a couple of buns.  Not Father Tom's buns, just the ones on the table."  He laughed as he waved them over.  "Here ya go.  Nice and hot off the grill!  Nothin' better!"  He shoveled a juicy hamburger onto her plate.  It was a little charred around the edges, but it smelled wonderful.

"Head on over and have a beer in the tent," he urged.  "Beer's not free though."

"Uh, no thank you.  I'll have a soda though."  She added mustard and pickes to the fragrent meat patty and popped the tab of a diet Pepsi.  She realized that Tommy Halvorsen had come to stand beside her, holding his youngest daughter by the hand.  "There you go, Pastor,  a free venison burger, courtesy of the Little Big Foot Chamber."

Posted by Dorcas (aka SingingOwl) at 3:41 PM

MMMMmmmm...I'll take one of those too!!

Thank you for continuing the story. Happy Thanksgiving and God bless.
Gayle