Part One is HERE. 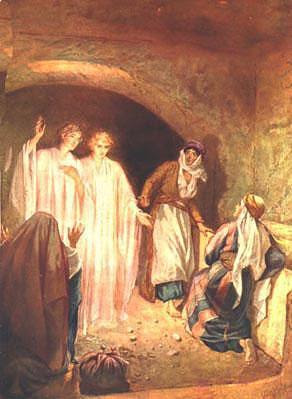 From Luke 24
Now on the first day of the week, very early in the morning, they, and certain other women with them,came to the tomb bringing the spices which they had prepared. But they found the stone rolled away from the tomb. Then they went in and did not find the body of the Lord Jesus. And it happened, as they were greatly perplexed about this, that behold, two men stood by them in shining garments. Then, as they were afraid and bowed their faces to the earth, they said to them, “Why do you seek the living among the dead? He is not here, but is risen! Remember how He spoke to you when He was still in Galilee,saying, ‘The Son of Man must be delivered into the hands of sinful men, and be crucified, and the third day rise again.’”

And they remembered His words. Then they returned from the tomb and told all these things to the eleven and to all the rest. It was Mary Magdalene, Joanna, Mary the mother of James, and the other women with them, who told these things to the apostles. And their words seemed to them like idle tales, and they did not believe them. But Peter arose and ran to the tomb; and stooping down, he saw the linen cloths lying by themselves; and he departed, marveling to himself at what had happened.

Lucifer was anxious. His initial glee at watching the suffering and death of Christ had dimmed as time had passed. He had begun to remember things that Jesus had said about being dead but later being raised to life. He remembered the dead girl that had lived again, the widow's son raised during his own funeral procession--and worst of all was that weakling Lazarus who had been dead four days and now was walking around in Bethany, a picture of health and stronger than he had ever been!

The Prince of the Power of the Air had dispatched two of his strongest demons to inspect the stone in front of the tomb and to look inside if they could. Now he awaited their return, pacing, snarling curses and hideous words of filth and hatred.

Near the garden tomb, the temple guards were growing restless. The highest ranking one among them understood their growing murmuring, even though he did not show it. This is  the most foolish assignment any of us could imagine, he thought. Are we guarding the tomb from grave robbers? It was high time they returned to their posts in Jerusalem at the great temple. The one called Jesus of Nazareth had owned little as far as the guard could tell, and even his robe had been won by a Roman soldier. What was so special about yet another man claiming to be God's anointed? Yet...something seemed strange. It was almost as if they were guarding the tomb to insure the corpse inside stayed put. I am  a fool!  He snorted in derision at his own thoughts. The dead man had been someone special, that was certain.  But the man was dead.
Then something...shifted.  He felt it in the ground beneath his sandals, in the sudden stillness as the birds stopped their early-morning chirping, in a subtle change in the growing light of the approaching sun.  And then, with bone-chilling awareness, he heard it --the slow, grinding scrape of the huge stone moving along the ground! He whirled and saw two men in white. That was the last he knew for a while, as he and his fellow guards fell to the ground, unconscious.

Above on the paapets, the excitement was building. The saints and angels had gathered together once again, watching, waiting, looking to each other with sparkling eyes and barely suppressed laughter. "Soon...soon now..."they whispered. The seraphims flew above the throne of God, singing ceaseless praise, "Holy, holy, holy is the Lord God Almighty who was and is and is to come!"

"Be ready! It is almost time!" Gabriel said to Michael as they stood once again on a great porch of the heavenly city. "The Almighty One is about to call to us."

Then each of them looked at the other, and both shouted aloud in joyful excitment. "There! There is the command from the Highest.  The Spirit of Life has done the work, and Christ is risen and ready for us!"

Laughing and singing, they were gone from the wall.  Behind them, a great shout of triumph arose from the gathered throng.

Mary had slept little for two nights. Her head ached and her usually sparkling eyes were swollen from weeping. She moved with her friends through the mist of early morning. The light of approaching dawn was faint, and the women stepped carefully and quietly, hoping to remain unseen. None spoke. As one and then another had joined the group, they had embraced each one in shared sorrow. Each woman added something to their store of precious spices and ointments, placing them carefully in a basket that Johanna carried.

As they neared the place of the tomb, Mary softly spoke at last, a frown creasing her forehead. "How are we going to move that enormous stone at the entrance?" No one answered, but no one stopped walking either, a group of sad and silent women in the grey before first light, sandles pattering against the earth.

Not far away, Jesus moved through the trees, gazing at the new day with a sense of wonder. How different it all seemed today! He stopped in a sun-dappled clearing and lifted his hands heavenward in praise and joy. Large holes pierced his handss, but the edges were healed and his skin was smooth and glowing with life. "Thank you, Father, for this day of wonder and joy! I will soon be home."

Mary had moved ahead of the others, trying not to cry in front of them, afraid that she would be unable to remain silent.  Now she stopped, confused and frightened. Temple guards lay sprawled on the ground, apparently senseless. At first she had thought they were dead, but then she saw the chest of one rising and falling.

She glanced back at the other women, who had also stopped.  They were  looking at her as if for direction. She shrugged, and then slowly, step by step, Mary moved around the prostrate soldiers and on to the tomb, past the entrance and then inside. There was the slab where Jesus' body should have been, and the graveclothes, neatly folded..

It was gone! Grief assaulted her anew, and she gasped in shock and anger.  "The body is gone! Someone has taken our Lord away!" Half-dazed, the others moved foreword and peered, one by one, inside the dimness of the hewn rock.

Then light that came from everywhere and nowhere filled the tomb and the area around it, illuminating the faces of the fallen guards. A strange and stirring kind of music filled the air.  The women, badly frightened and already confused from grief and lack of sleep, gasped in surprise and dropped to their knees. Some hid their faces.

Michael and Gabriel shone with a radiant spectrum of light, robes glowing as if from within the cloth itself. They reached out their hands in blessing, large smiles spreading across their faces. Michael thought to himself, as strength flowed through him and out to the women, "This is the most wonderful assignment I have even been given!"

Gabriel laughed softly, "Go on now, go tell the others. They won't believe you at first, but tell them the news. He who was dead is alive again, and death is swallowed up in victory!"

Lucifer screeched in frustration and hatred, hiding his eyes from the light and crouching down in fear.

The throne room of God rang with shouts and songs of joy. Michael looked at Mary Magdalene, she who had once been almost destoyed by the powers of evil.  "You are the first to hear the glorious news."

The ancient messangers, shining in reflected glory, spoke in unison, voices ringing with power and the authority of the One Who Sits on the Throne and of the Lamb. "He is not here! He is risen!"

As the rays of the rising sun illuminated the morning, the women ran for town.
Posted by Dorcas (aka SingingOwl) at 1:43 AM