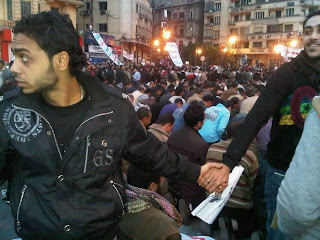 The following is an except from Lee Grady's "Fire in My Bones" column.

A prayerful minister says her country is passing through a “spiritual birth canal”
My Egyptian friend Nadia*...is praying—and asking the Christian community in the United States to join her.

“For the church in Egypt, it feels like we are going through a spiritual birth canal,” Nadia told me in an interview this week. That birthing process is precarious. The uprising that began on Jan. 25 is a response to years of political and economic oppression. Yet at the same time Islamic fundamentalists are angling for control—and they could turn Egypt into a radical Muslim state like Iran....a foothold to eventually take over the country,” Nadia says.

The Christian community in Egypt is divided over how to respond to the current crisis. Some are simply hoping for a return to calm. Others welcome the change. Some even say the church may have to go through a season of difficulty—perhaps even a wave of persecution...“I never would have thought two weeks ago that my country would be turned upside down like this,” Nadia says. “But I am praying, ‘Lord, use this to establish Your sovereign will.’”

Islamic fundamentalism has been on the rise in Egypt for decades. Christians often are denied jobs and promotions. Outside of churches, public assembly of Christians is rarely allowed. All ministry directed toward Muslims is illegal, and Muslim converts to Christianity are not allowed to change their religion on their national ID cards.

Yet last weekend, during the street demonstrations in Cairo’s Tahrir Square, a hint of religious freedom was in the air. On Feb. 6, a large group of Christians from various churches sang and chanted “Bless my nation!” while an Egyptian preacher told the crowd that Jesus Christ—Issa the son of Mary, as he is known to Muslims—defends justice and cares for the poor.

A few days earlier, in the same square, a group of Christians encircled some Muslims who were praying, locked arms and formed a human shield to show the world that Christians would defend their Muslim friends as they assembled to worship. [Pictured above.] More than 320,000 people have viewed that scene since a participant in the demonstration posted a photo of it on Twitter.

Nadia says most Egyptians—including a majority of Muslims—were horrified on New Year’s Eve when Islamists blew up a church in Alexandria, killing 25 people. “It shook the nation,” Nadia says. “People could not believe this was happening. It laid the ground for some unity.”

Nadia, who is involved in ministry in Egypt, remembers walking around her city when she was a young adult. Back then, it was rare to see a woman wearing the Islamic veil. But today, she reports that as many as 85 percent of women are covered in hijabs (veils covering all but a woman’s face and hands) while some don the more conservative niqabs (full black tents that only allow a woman’s eyes to be seen).

The heavy fabric is a visible manifestation of the shift toward Islamic fundamentalism that has occurred in Egypt since the 1980s. It also symbolizes the retreat of women to more traditional and less visible roles. However, the uprising of Jan. 25 has brought many women out to the streets to call for freedom.

Regardless of what happens in the next few months, Nadia is holding tightly to a prophecy from Isaiah that many Egyptian Christians have memorized.

Isaiah 19:21-22 says: “Thus the Lord will make Himself known to Egypt, and the Egyptians will know the Lord in that day. They will even worship with sacrifice and offering, and will make a vow to the Lord and perform it. The Lord will strike Egypt, striking but healing; so they will return to the Lord, and He will respond to them and will heal them. (NASB)”

“I know we will see the glory of the Lord cover Egypt,” Nadia says confidently. “An altar for the Lord will be established in our land.”

* Nadia’s name was changed to protect her and her family.
Posted by Dorcas (aka SingingOwl) at 10:59 AM

God bless Nadia and her family- Your kingdom come Lord, your Kingdom come.