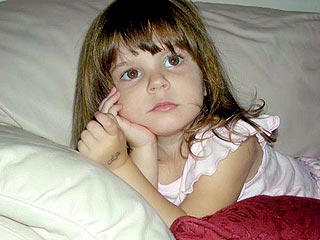 I almost fear to write this post. Almost.
I have been grieved along with many others every time I see this picture of Caylee Anthony.  Mostly because knowing what happened to the sweet little girl pictured--well, it's just horrific.  And partly, if I am honest, because this particular picture, and the dark brown eyes looking up so sweetly, could be of our granddaughter Trinity about two years ago.  It gives me a physical, gut-level reaction to the events that perhaps I wouldn't have otherwise. I grieve for the life that was stolen.
I was among the many who were surprised by the verdict.  Clearly, Casey Anthony is deceitful, disturbed, and has no credibility.  Her story is hard to believe.  In fact, I don't believe it.  I find her actions (or lack of action) perplexing, disturbing, alarming, and disgusting. Did she kill her daughter?  I don't know. Few believe we will ever really know what happened to little Caylee.


Still, there are other disturbing things these days following the "not guilty" verdict.  For one, the reaction of many people towards the jury.  I have an opinion about the case--but let's face it--I wasn't in the courtroom and I didn't have to be a juror, and I don't know all that they heard and saw.   I know that our justice system is deeply flawed.  But I still rejoice that, at least in theory, we are "innocent until proven guilty."  Do we have any respect whatsoever for the fact that the accused was found "not guilty" in an American court of law?
I am perplexed at the comments I have read and heard about the attorneys who represented Casey Anthony--that they are "scumbags" or "as guilty as Casey" or similar sentiments.  If I ever find myself in a courtroom as an accused person, I will want a lawyer who does what they are supposed to do--defend me to the best of their ability.  Is that not the job of the defense, for goodness sake?  Do we not know that accused people are not always guilty people?  It may be a flawed system, but I'm glad we have a system!
Most of all, I am disturbed by the hate-filled, venomous statements (often referencing God, Hell, judgement, and so on) from people who probably would call themselves Christians.
Here are a few samples from the Internet:
“The jury may have found her ‘not guilty,’ but she'll get what’s coming to her. God will make sure of that!”
“Casey, you didn't win. You have a dead daughter, a guilty conscience, a society that hates you and a date with God.”
“Dear Casey Anthony, God will deal with you. Good luck finding a lawyer that will help you lie to Him.”
"There is a special place in Hell for you, Casey."

Surely I am not the only one who is disturbed to hear or read Christians hurling judgment in anybody’s direction.  Is this what we should do?
A recent column from J. Lee Grady said, "But in the end, people who follow Christ should not be grabbing pitchforks and demanding vigilante justice just because a trial didn’t turn out the way we thought it should. Our response should be tempered with redemption."

Have we forgotten that Jesus said he did not come to call the righteous, but sinners, to repentance  (Luke 5:32)?  Have we forgotten his words to the religious individuals who brought a woman caught in adultery to him?  "Let the one who is without sin cast the first stone" (John 8:7)?  Or Romans 3:23 which reminds us that ALL have sinned?

If we truly know the forgiveness of Christ, how can we rejoice that someone else will"get what's coming to them"?  Our attitude should be guided by Ephesians 4:32: “Be kind to one another, tender-hearted, forgiving each other, just as God in Christ has forgiven you."   If I understand that I am not righteous, I can hope that others find forgiveness and peace.  Is that not the Good News, after all?

One thing I know, God's love is not just for the "good" people.  Sometimes I wonder if those who are the loudest in condemning Casey to God's wrath are not, as Shakespeare said (paraphrased) protesting a bit too much?

Will you join me in praying for Casey and for her fractured family?  It is certain that God loves them--flaws, sins and all--and they desperately need God.

And will you also join me in a prayer for the abused children whose stories do not make the headlines?  One organization involved in abuse prevention has said that every 10 seconds a case of child abuse is reported.  Think of the unreported ones...the little ones who are, even now, afraid.  Let's stop minimizing abuse, especially in the church, and let's be vigilant in  in addressing child abuse in all its forms.  Let's make sure we are aware and careful and loving toward children around us.  Let's stop all the rhetoric and do something constructive with our frustration.  And let's be known as people of grace and mercy.  Let's put down the stones.
Posted by Dorcas (aka SingingOwl) at 11:23 PM

I've totally been praying for Casey too. I believe Caylee is in Heaven with God; isn't that where her mother should be? She may be guilty of murder; she may just be guilty of negligence, which ought to carry its own punishment. But we're all guilty of Jesus' death, even the most vehement Casey hater. And Jesus was more innocent than Caylee even. Good post. I agree. Let's pray for Casey.

I wasn't about to follow every detail of the trial, but it seemed clear from the news that the state didn't have details about cause of death, etc. and any dna. That doesn't excuse the Mom's behavior or callousness or whatever in the time following the disappearance. She acted like a child who wouldn't deal with the truth, whatever the truth might be.

Perhaps the trial would have turned out differently if the prosecution had charged a lesser offense. I would have had a hard time with the reasonable doubt thing. And as a Christian, I wouldn't have been allowed on that jury, since I don't believe in the death penalty.

Yes, God will deal with these people in God's own way. I don't feel the need to hate or slander anybody.

I think our pastor said something similar this weekend when he said that Christ died for not only you and me, but for the adulteress, and the John Wayne Gacys of the world. All they have to do is to accept His Gift. Who are we to turn them away, no matter what they've done? Who are we to judge them when Christ died for ALL sin?

I admit I felt just as shocked by the jury's verdict as anyone else, but the trial has to end there. We can't keep convicting someone who has been set free.

In the meantime we can pray and work to make sure other children are safe from this type of harm. We need to be proactive instead of reacting with hatred.

Once again, Dorcas, you have hit the mark. Thank you for this prayerful and hopeful post. It is good to read you here again. I keep checking -- just in case.
Bless you!

Well! Finally, I read (hear) here a voice of sanity -even if it is kind of crying in the wilderness compared to all those acting out so beligerently, demanding there is an error in the jury's thought processes, etc. I agree that Casey Anthony most definitely did her level best to mislead and distract the police and on most points, it would appear that she is guilty -just not quite sure though of what and unfortunately for those crying "off with her head" it the things that they were unsure of that caused them to opt for declaring her "not guilty." Personally, I do think the mere factor of the time elements involved in little Caylee even being reported missing by her mother should constitute some type of reprimand as that seems to me to be a form of child abuse but then again, what do I know about how that crime is judged, ya know.
The whole thing though is such a travesty and tragedy that this beautiful little girl lost her life -just hard to accept that aspect as I'm sure, by your words, you see the same horror of that as do I.

I saw a lot more of the trial than I wanted to. And this picture looks eerily like one of my stepdaughter...now 32. Every time I see it I cringe.

Caylee is with Jesus. I think Casey is in some way responsible for her daughter's death, but it's not my business what happens to her. Hating her would just make me sick and hateful...

I just finished reading the story of Karla Faye Tucker (committed heinous murder and was executed in TX but not before becoming an amzing woman of the Light) and it THAT isn't a story of redemption I never heard one. Thanks for your comments, everyone.