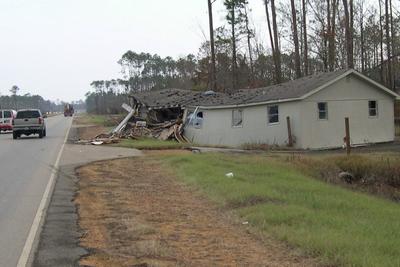 The debris from what was once the front of this house was scattered right to the edge of the four-lane highway. At first we did not realize that the house could not have sat on that spot...but no one builds a house quite so close to the traffic. We realized that the house had been flung to its present location from--who knows where--there was no sign of the foundation. 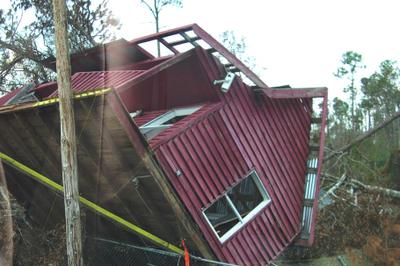 This little house was leaning against a telephone pole. Again, no clue as to where it began it's "flight" since there was no sign of a nearby foundation or driveway. It made me think of Dorothy's house in "The Wizard of Oz" a thought that would have made me smile if I had not already been on the verge of tears.

Along the highway to Waveland we did not see any homes that were not totally demolished, or flung about like tiny houses from a Monopoly board. 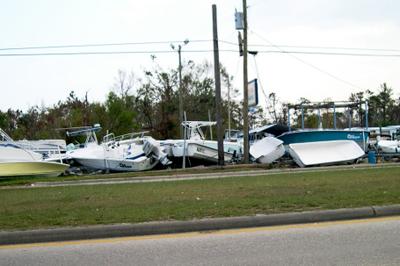 This is what remains of a boat dealership. The closer we got to Waveland, the more shocked we felt. The sight and smells are indescribable, but these pictures are not isolated, or necessarily the worst of what we saw. They are typical of what we found everywhere. 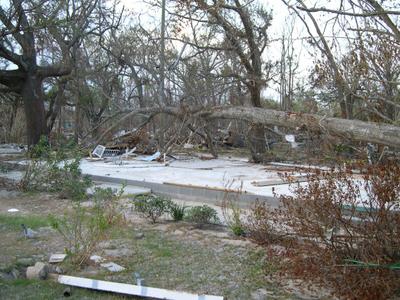 A foundation, and nothing else. No boards, bricks, glass, furniture. Nothing.

Before going over to the Convoy of Hope site, we drove down to the nearby gulf coast. The pathos of what we saw are beyond words. On the site of what was once large luxury condos was...mostly nothing at all. You can see the gulf if you look closely between the branches of the bare and twisted trees. A few piles of bricks and some scattered belongings are all that remain. Debra and I stood in silence as Ken took photos. I found myself thinking the rather morose words of Solomon in the biblical book of Ecclesiastes, "Vanity of vanities, all is vanity, saith the preacher." 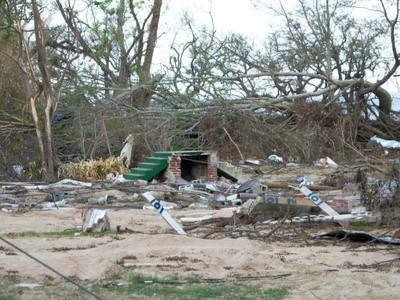 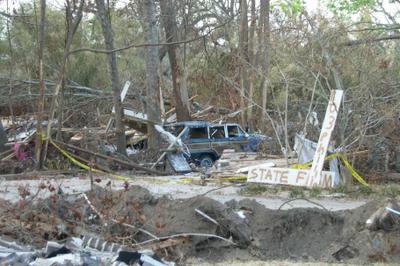 Many addresses are spray painted on some nearby surface. There is simply no means of identifying what home used to stand there.

We headed to the K-Mart parking lot and the Convoy of Hope distribution center. We found a hand made sign announcing "Camp Katrina," where many people had pitched tents on the grassy edge of the parking lot. Behind the small "dwelling" tents were several large circus-type tents, a demolished group of stores, a twisted and gutted McDonald's and the shell of what was once the Waveland Cinema. We found the Convoy of Hope people and they instantly put us to work, as I wrote in an earlier blog entry. I worked distributing clothes, and Ken passed out bleach and other cleaning supplies along with hand disinfectant, and other items. Here he is. He is probably announcing, "Just take one bottle of bleach, please!" 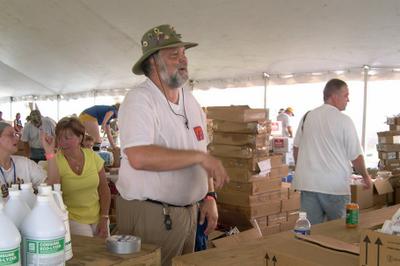 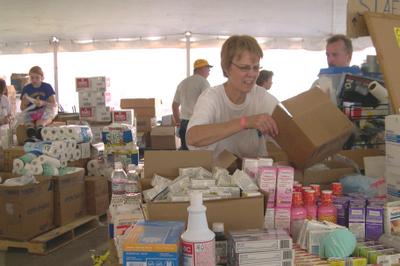 Here is Nurse Joan, sorting first aide supplies. Note the large pile of toilet paper alongside. One of those items we take for granted until we don't have any. 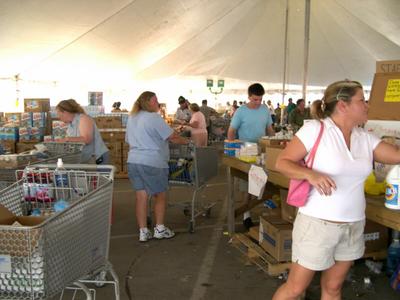 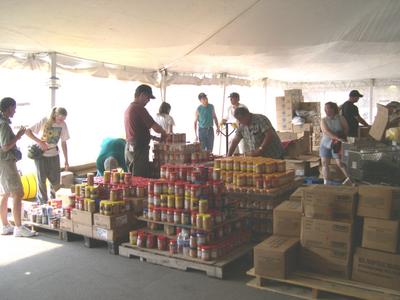 Guests shopping for free groceries and supplies inside the tent. 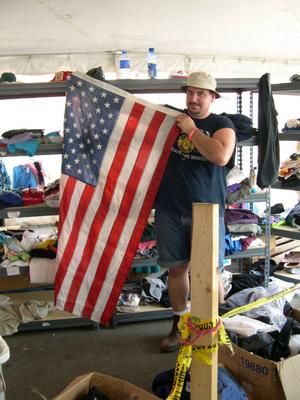 This guy worked all day passing out clothes, shoes, underwear, towels and socks. The work was nonstop, demanding and exhausting. At one point he opened a box of t shirts and pulled out this large American flag. Oddly, everyone got quiet for a moment, and then someone asked if they could have it to hang in front of what used to be their home.

After two days of standing on my feet for ten hours at a stretch with no breaks, I returned to First Assembly Gulfport (thank God for their showers and my cot) with some trepidation about how I was going to get through the remaining time. My back was hurting badly, and all of us were so stiff we crawled clumsily out of our van like zombies. That night I asked God to show me what to do, or to assign me something different.

More about that in Part Five.
Posted by Dorcas (aka SingingOwl) at 9:38 PM