Katrina Report Part Five: Outside the Door of "The Waveland Store" 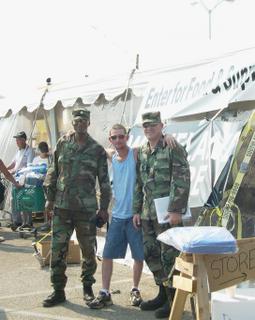 The National Guard was evident. And appreciated. These two posed outside "The Waveland Store" (our disbursement center) with a Waveland resident. Afterward, he ran into the big tent to gleefully inform a buddy, "I got my picture taken with th' Army men!" 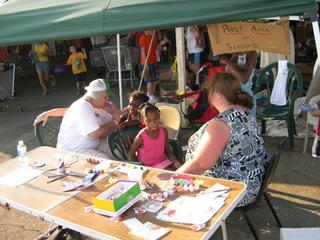 Debra and me (in the hat) with two little customers.

On our third day in Waveland, Misty, our wonderful "boss" announced that she actually had enough volunteers inside the tent so that Deb and I could go outside and talk with people, set up our little face paint table and give both the parents and the children a much-needed break. We painted hundreds of little faces. All colors: beautiful dark brown faces surrounded by black braids, white faces with blonde hair blowing into the paint, many cute freckled faces, mostly little faces, but an occasional grownup sat still and allowed us to paint a frog, pumpkin, basketball, flower or what have you on their sunburned and sweaty faces. Here are some pictures of our little canopy. We sat in the humidity and heat and passed out bottles of water, and decorated little faces with bright paints. And we smiled, and offered senior citizens a chair-- and mostly we listened to people as they cried and talked and smiled as they watched us with the children, and they told their stories as if they'd known us a long time. 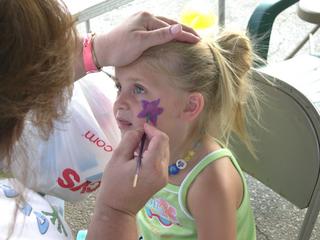 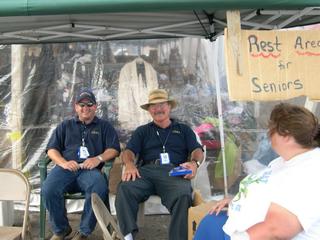 These two are the firefighters, turned temporary FEMA guys, that I mentioned below. J.J. is on the left. If you can't read the sign, click on the picture and you will see that it says "Rest Area for Seniors." We had struck up an acquaintance with these two earlier in the day, and when they came by I asked if they'd sit for a photo. They somehow knew we were setting them up (I do NOT have a poker face) and they sat down rather reluctantly. After I snapped the picture, Deb showed them the sign....joke on FEMA...maybe not so funny, all things considered. But they groaned dramatically...and took it well.

Later, a woman stopped to sit. She did not look well and she was confused and argumentative. She overheard me say something to Ken about his blood sugar and she rather casually mentioned that she had not had a glucometer since Katrina came to town. Ken (also a diabetic) took her blood sugar--it was around 600! If you don't know about blood sugars, Ken says to tell you that if his was that high he'd be in a coma. He's not kidding.

J.J. then walked by, exactly at the right time to escort her to the nearby medical tent. She was quite reluctant, but it helped that he was in a sort of uniform. Later he reported to us that she had been sent to a hospital immediately.

We wondered aloud, "What if she hadn't overheard that Ken was a diabetic? What if Ken had not been around (he usually would have been inside the distribution tent)? What if we hadn't just received a shipment of glucometers to Convoy of Hope (the first we had seen)? What if J.J. hadn't walked by just at the right time to be "a government authority?" God was good to that lady, I think.

Blogspot's photo download is not working again. More later.
Posted by Dorcas (aka SingingOwl) at 12:05 AM

Anonymous said...
This comment has been removed by a blog administrator.
3:33 AM