At least that's the plan.

These first pictures are from a Waveland street right on the gulf. If one had looked out the front door of one of these homes, there would have been nothing to hinder the view. Just your lawn and then a narrow street and then a beautiful, white beach and the gulf waters beyond. I'm told that some of the most beautiful homes of the gulf coast were located here. In most cases, nothing, and I mean nothing, but foundations are left. I can only assume that the disintegrated houses were swept into the gulf as the storm surge receded. But this home was a strange sight to see, with the bottom floor completely gone but at least part of the second floor, including nice windows, intact. Notice again, the beautiful oak trees are stripped of foliage and the grass is "burnt" brown. 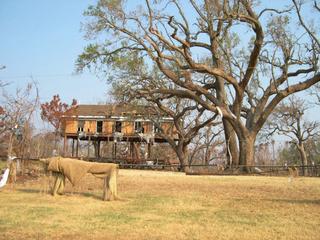 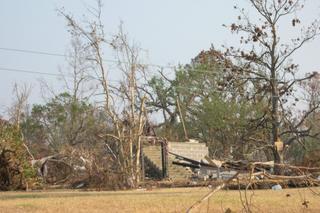 Notice these large steps. It must have been a very big house. All that is left are steps to nowhere. 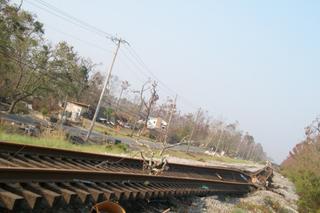 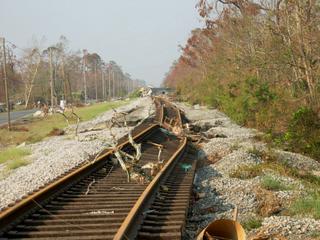 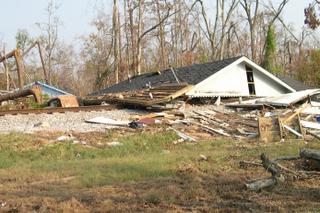 Ken took these pictures of the railroad tracks. They are twisted totally out of shape. And part of the top of a house is flung onto the tracks.

These pictures are not far from the Assembly of God Church of Waveland. Perhaps we will take a team there early next year. We stopped by to see how they were doing, having been told that the church was a total loss. It was standing, but completely destroyed by mold and will have to be torn down. The pastor and his family are living in a little camper. The Presbyterian pastor was there too, and his lovely wife. The two families are good friends. The Presbyterian pastor's wife was the only woman I saw all week who had a "full face" of makeup on. Her hair was neatly combed, and she was casually but impeccably dressed. It was so unusual as to be striking.

I remember her sad eyes as she showed us her only remaining possessions, five decorative plates that had been a present from her grandmother. She was trying to remove the remains of Katrina's mud, a sticky smelly substance that stuck fast. The AG church had some running water, so she was there using the garden hose. It was a very sad sight. Tears filled her eyes as she told us they had lost everything, but she smiled when she told us that the Presbyterian church had, miraculously, been totally spared--an amazing story. A man who was not part of their church, in fact had not darkened the door of a church for many years, was riding out the storm from somewhere near the church. He told the pastor and his wife that he watched the storm surge coming in, watched it part and go around the Presbyterian Church, and come together again as it passed! He was in church the following Sunday! Wow!

I also remember the faces of many people. The beautiful young black girl who asked me to paint AK 2B on her face (Alicia Keyes to be). I did so, but I told her she just needed to be herself. That was great enough. If I see her on American Idol some day, I will recognize her. I told her so.

I remember Stephen, a sweet-faced, chubby little boy who his sisters called "Bubba." I learned that "Bubba" is not, contrary to what we northerners think, a derogatory name, but simply an affectionate term for "brother." I painted a football on his face one day, and a heart the next day (a return customer)! He waved cheerily to me as he left. He said he'd see me again the next day. I was sad to tell him that I would be on my way back home to Wisconsin. I wish I could start a sidewalk Sunday school at the K Mart parking lot, or at the Taco Bell lot where many of the children seemed to be "living."

I remember one of those children from the Taco Bell lot (if I am remembering rightly)a boy who opened his "gift box" (a shoebox full of toys from an Alliance Church in NJ) and shouted with glee because he'd received a "Woody" puppet. Think Disney's "Toy Story". His mama told us, with something like joy on her face, that Woody was "his favorite, his very favorite character!"

I remember the strikingly beautiful elderly woman who sat down under our canopy and gratefully accepted a cold bottle of Aquafina, telling us that she was 91. And had lost everything.

I remember the day we heard that some of our colleagues had helped a woman who had lost her two children during Katrina. She didn't know if they were alive, and if they were...where they were. They were in a Red Cross shelter in Utah, along with their babysitter. We all rejoiced.

I remember the children, sad-eyed and a bit fearful, most keeping a watchful eye out for the grownup with them. My mind could not comprehend the losses they have suffered. They lost their homes (in most cases), their belongings, their school, their McDonald's, their K-Mart, their entire town. I left Camp Katrina with a feeling of relief that I could return to my clean little home in my clean little town in nice, cool Wisconsin. But I can't stop thinking of those faces, those eyes, those stories. I pray for Waveland, and all along the gulf coast, every day. I don't think my life will ever be quite the same.

Thank you, Gulfport AG church, for allowing us to sleep in your rooms and rinse off in your showers and attend Sunday worship service with you. In retrospect, I see God's plan in it all.

I hope I will see these once-beautiful towns again, in better days.
Posted by Dorcas (aka SingingOwl) at 5:17 PM

What a beautiful post....you tell the story well....and with heart.. Great pictures....by your words and pictures we can see the inside story.

Singing Owl, I've linked to these archives on my blog today. Thank you for your stories and pictures.