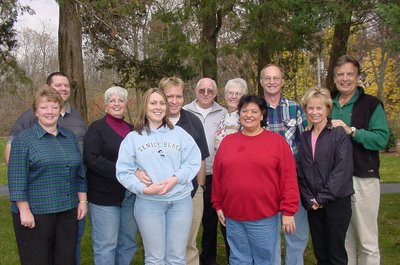 This is a group of ministers and their spouses. (Mine wasn't present.) The older woman in the back row is a Nazarene pastor. The only other woman pastor in the group is me, second from left, last row. The group also included a Methodist pastor, a Lutheran pastor, a Church of God youth pastor, and a Baptist pastor. I think I have those right. The reason I posted this picture is because I recall conversations among this group about "the call." We were at Cedarly Pastor's Retreat Center, spending a marvelous (and free) week eating gourmet meals, visiting a nearby Anglican Seminary, walking in the woods (wet!), practicing lectio devina and (in my case) sleeping for hours on end from sheer exhaustion. It was fall. A chilly drizzle continued all week until our day to go home, when the picture was taken. We built fires in the fireplace every day, and we shared good fellowship with one another.

Conversation turned to our churches, of course, and then to our calling to ministry. The Nazarene pastor's husband was not present at that time, but as for the wives, some felt just as "called" as their pastor husbands. Others most decidedly did not. Several of the Rev Gals and Pals have spoken about "calling" on their blogs. It is a diverse group of clergy, but everyone, from nuns to Methodists to Lutherans seems to understand that word. I've also been asked to be a guest blogger on The Scroll, the blog of Christians for Biblical Equality, and as part of that I've been writing about my calling to ministry.

I am not sure how many Rev Gals, or other "called" folk may stop by, but I would love to hear your stories. The calling of God is difficult to explain sometimes. And sometimes, especially after running a gamut of emotions and experiences as I did last week, I wonder what God was doing.

You can check out The Scroll once the article (from me and some other clergywomen) has been written and posted. I'll let you know. Meantime, here is a little part of my call story.

It is a very long story, so I'll skip the beginning and I'll skip the end and hop to the middle, not telling you about the longings of my heart when a child, nor my subsequent experiences at Trinity College, North Dakota. My husband had already told me that when he finished his USMC enlistment he wanted to complete his degree in order to enter some kind of full-time ministry. I was more than fine with that. One Sunday night our pastor (Rev. Dave Davidson, Evangel AG, Silver Springs, Maryland--anyone out there?) preached a message about placing God at at the center of life and seeking to arrange other issues around serving Jesus Christ and his Kingdom. We concluded with a time of silent prayer, after being instructed to ask God if there was something we needed to understand about our life in the Spirit. I was tired and hot and wanted to go home, but I did as I was told, acknowledging my rather "unspiritual" state to the Lord as I closed my eyes.

To my utter surprise, as I stilled my thoughts I began to see what I later described as "slides." My dad once had a camera he loved, and he always took slide pictures, which we would later project onto our white living room wall. It was like that, only the "wall" was inside me. The scenes were vivid--and very surprising.

I saw five still pictures, all related to people and to ministry. I was present in each, but never alone in the picture. I won't describe them all, but one caused me great consternation. I was preaching, something I had never done and never intended to do. I wore a suit and I held a black Bible aloft. (Something I don't do, but I sure couldn't miss that I was preaching, not teaching a Sunday School class.)

I opened my eyes and left the church feeling wide awake and startled. For some time I told no one, not even my husband. There is more to the story, of course, but I trace later events, and my search to discover if it was really acceptable for women to preach, to that hot summer night in 1976 in a suburb of Washington, D.C.

It was a while before I acknowledged that what I had seen just might have been the Holy Spirit--but, deep down somewhere, I knew.

Anyone else care to share a little? If you post on your blog, just let me know.
Posted by Dorcas (aka SingingOwl) at 12:04 PM

I'm looking forward to hearing this discussion. I just hope nobody posts something about these types of things being unreliable, as in "from below," so to speak.

How lovely to be with this group of pastors and spouses. You may have differences, but undoubtably wouldn't have come together if there wasn't respect.

It was lovely. This place offers these free weeks to pastors of any orthodox Christian denomination, so one never knows who is going to attend. There is one in Texas too, and this group was from a fairly wide range of miles. They want to eventually have a network across the nation. That would be sooo great.

Thank you so much for this entry, Singing Owl. I do want to answer, but would prefer to take more time than I have right now.

Just thinking that back when I was elibible, I'd sure have enjoyed one of those weeks! Another thought: Something a lot of parishioners just don't think about is that time off for vacation isn't sufficient. If the salary is low, it's tough to find someplace to go that a pastor can afford. It's not like you can hop a cruise every year!

And thanks for your comment over at my place. That meant a lot. Hugs!

The only downside is that one can only visit there every two years. It's time for me, but no openings till late fall. I need to sign up!

You're blessed. Your summer seems to have been filled with RE-creation.

I've been trying to eamil about a question I have for you. But I can't get my computer to access your email link (something about having wrong protocol). Would you mind sending me an email so I could have your address and send you one?

this is a wonderful wonderful post. Please don't doubt your calling - especially along the lines of whether it is acceptable for a woman to preach or not ... we all do (most of us) and I've had the rockiest time of all recently...

It's of Jesus. By a well. Very casual. Actually sitting on the wall of the well and swinging his legs and grinning.

he calls me to drink. And when I've drunk and drunk - the picture pans round and I see crowds of people and hear Him say. "Give water to these my sheep"

It could be interpreted as a calling to good works, or mission ofcourse, and my conviction that I am called to be a minster - to preach the word, do pastoral visits and celebrate the Eucharist - is based on more than that.

But that's the picture of my call to vocation. To give water from Him to others.

I'd appreciate prayer right now - because it's not easy. God never shuts a door - but recently doors have been shutting and I'm really confused why -and how God is calling me right now. More specificially into what. It's scary and at times downright lonely.
Discernment isn't that easy - and there IS a lot of opposition to women in ministry (for a myriad of reasons) ... and I don't want to be pastor just because I'm a woman, or in spite of it , but because I am called. If any of this makes sense?

Be blessed sis. I've missed you! (and Oh I've been praying for your sister out west - God bless you and her)

Lorna, what a picture! I haven't been commenting much lately, but I have been praying for you, knowing that those "closed doors" hurt. I'm not questioning the "women in ministry" stuff. I resolved that a long time ago. I'm just in a bit of a funk I suppose. I'll be fine...but I am thinking about the journey I had, partly to refocus and regroup. ((((((((LORNA))))))))

I love call stories. I'll post mine on my blog...but give me a few days.

That's a beautiful story, about your calling. I don't think mine was ever so clear, but I do feel it every day.

thanks. I'm ok. mostly. angry if I'm honest at how it's all been /being handled and then so grateful that God has opened other doors and for the answer to pray I got earlier this week in the form of a cheque AND a confirmation through another person.

God is good! I just need to keep reminding myself of it.