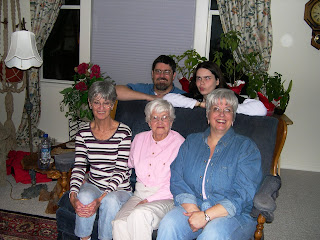 My nephew, and grand niece (back row) Sister, Mom and me (front row)
My sister with Alzheimer's fell and broke her hip. After surgery and some rehab she is back at the group home. She does not know anyone, only weighs 73 pounds (!) but is mostly cheerful.
As for my mother, she has been in the nursing home since she left the hospital. She is talking somewhat, and she is walking somewhat, but cognitively she seems to be continuing to deteriorate. Some days doesn't seem to be thinking of much at all. Other days she is very distraught, or sometimes relatively cheerful. Her memory is very bad. I do not expect she will be returning home. I had a conversation with the third sister last night. A sad conversation, in which she said, "It is like a race to see who goes first, our mother or our sister."
I've been taking a break from Blogger to do some fasting and praying and pondering (not about family issues--other things), but I'll be back soon. I'm okay!
Posted by Dorcas (aka SingingOwl) at 1:19 PM

Really sorry to hear that it's all hitting the fan at once. I'll be praying for peace.

I have two comments:

1) My prayers are with you and all of your family. Having to be witness to that is tough. I can't imagine having to do it twice at the same time. If you need anything, I'm around. *hug*


2) Fasting...as in no food?!?!? I understand wandering about in the desert for 40 years, there might not be much you can do about it, but VOLUNTARY time away from hot wings?!?!?!

Losing a loved one is difficult under any circumstances but I think watching them waste away -the loss of the mental capacities -makes it all so much more painful.

The photo is such a startling contrast to what you are living now and hopefully, will bring you wonderful memories now and in the future as well of how things once were.

Prayers, of which there are many, will bring you through such a difficult time. Peace.

Jeni, the picture was from 2005, a trip which I blogged about here. Both my mom and my sister were experiencing significant dementia, but I still enjoyed the time, which was bittersweet. Thanks, everyone, for your thoughts and prayers.

hmmmm why won't that link work?

(J)'s dad was diagnosed with Alzheimer's in his early 60's, just a few years after we were married. Watching the slow decline of an energetic man was pure torture for (J). The worst part was that there was no chance for closure on the things which had torn them apart in her teens and twenties. Blessings to you and your family as you endure these trials.