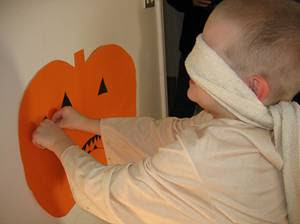 The pungent fragance of smoke wafted through the woods from the many wood-burning stoves of the area. The honking of Canadian geese on their way south filled the sky, the night air was cool and the trees had donned their colorful fall garments. Little Big Foot’s summer tourists had mostly disappeared for the season, but the stores, restaurants and business establishment were decorated for the season nonetheless with cornstalks, hay bales, scarecrows and pumpkins.

The Episcopalians had already begun practicing for their annual Christmas drama. Dee Anna had heard that people came from all over the county to see their beautiful production. The Lutherans were planning their annual Lutefisk supper. The Catholics had begun a campaign for Thanksgiving food baskets and all the churches were participating. Autumn had arrived in Wisconsin’s north woods.

North Woods Chapel was having a festival.

The water was colder than she had expected, and Dee Anna came up gasping. The crowd around the dunk tank applauded and cheered loudly. Catching her breath she called loudly, “Okay, those of you who said you’d pay to see me get wet, remember you owe the youth missions fund some big bucks!”

“We have the coolest pastor ever,” said one teen girl who was dressed as a butterfly. Her friend, a tall lanky girl who was outfitted as a vampire, grinned, showing her fangs. Dee Anna didn’t think she had ever seen her before.

“Make that the coldest pastor ever, and you’ll be right,” she called as a grinning Deacon Chad helped her out of the dunk tank and Lorene Johnson handed her a large beach towel. Madelaine was standing to one side with a school friend she had brought to the party, a short round girl with long braids. Both girls waved to Dee Anna as they munched on pumpkin-shaped sugar cookies.

The wide back lawn at North Woods Chapel was crowded with people—children, teens and adults. One side of the lawn was filled with food and the buttery aroma of popcorn mingled with the sweet scent of the funnel cakes that Lorene’s husband Jim was frying in a large vat. There were Nesco roasters full of hamburgers, hot dogs and bratwurst with sauerkraut. Crock Pots contained baked beans and German potato salad. Coolers held cans of soda in ice and one long table supported two large coffee pots and several jugs of hot cider.

The other side of the lawn featured a blow-up jumping castle and a row of booths that contained various kid’s games. A group of boys pushed each other and laughed as one of their friends shouted loudly that he had landed his wooden hoop over the top of a bottle. Dennis and Marla Whitewater stood together in another booth with fishing poles and helped children hook toys from a “pond.” Lee Coats stood in the next booth, helping a group of smaller children take turns trying to pin the nose on a Jack O’ Lantern. His booth also contained a large pumpkin bean bag game--in the same shade of glowing orange. Dee Anna smiled to herself, remembering that when she had brought the can of orange paint up from the parsonage basement Lee had agreed that the leftover wall paint would make a fine pumpkin color. He had seemed surprised to learn that the orange color was left over from someone’s previous paint job in the parsonage master bedroom.

Dee Anna aimed for the back door of the church, navigated through a kitchen full of junior high girls making candy apples and climbed up the stairs to the front entry and her office where she had stashed a gym bad containing a change of clothes. Slinging the bag over her shoulder, she headed for the women’s restroom.

North Woods Chapel’s new pastor was wet and her teeth chattered slightly, but she was happy. She had been in Little Big Foot for about two months. Madelaine had started third grade at the public school, and to her mother’s relief she had made several friends, the "best" of whom was Dana, the plump girl with braids. Dee Anna, Madelaine and the dog, Charlie, had settled in at the parsonage, and Chad and the Whitewaters had helped her paint the rooms more reasonable colors. The pizza-patterned carpet remained, but after bringing in their furniture, it was less noticeable. Madeline’s room was lovely, and the beige walls of Dee Anna’s bedroom were passable, but the orange closet remained. She planned to get to that soon.

Dee Anna had been busy getting acquainted with the people of North Woods Chapel. She had already visited most of the congregation in their homes and things seemed to be going well. The first meeting with the deacon board had gone off fine, she mused, and she had met with other ministry teams during the past weeks. So far, so good.

She peeled off her wet flannel shirt, put on dry underclothes and pulled a sweatshirt over her head. A few minutes later, she emerged from the restroom wearing jeans and white sneakers and with her red curls mostly dry. She was thinking happy thoughts of how well the Fall Festival was going. The attendance had been better than expected. They had planned a fun night that would conclude with a short time of worship and an autumn-themed story with a gospel message.

She peeked in the sanctuary doors. Mary Coats and another woman were arranging some props that Dee Anna planned to use during the story. Mary placed a scarecrow on a small chair, and then she smiled and beckoned, but she didn’t look happy. “What do you think, Pastor?”

“This looks great, ladies!” smiled Dee Anna. “Thank you so much for all your hard work.” Mary smiled and nodded but said nothing. Her companion was Mary’s neighbor, a small thin woman with a sharp nose who had recently started coming to church at Mary and Lee’s invitation. Dee Anna had only spoken to her briefly and now she struggled to remember her name. Betty? Bernice? Something with a B…

Her thoughts were interrupted as the woman crossed her arms across her chest and said, with a frown, “Pastor, I know I’m new here, and maybe I should keep my opinion to myself...” She paused and glanced at Mary, who was looking miserable now. “But I just cannot keep silent in the face of such goings on.”

“Uh oh,” thought Dee Anna as she said, “Is something wrong…um…Bonnie? You and Mary have done a wonderful job in here.”

“Scarecrows and hay and cornstalks in a church are one thing,” the woman snapped. “But…” she turned and gestured toward the direction of the back lawn. “Jack O’ Lanterns? Don’t you know those are pagan?”

“And another thing,” Bonnie continued, stabbing a finger in Dee Anna’s direction, “Did you see those costumes? There is a vampire, a witch, and even….” she sputtered, “A devil costume! I simply cannot believe that any church that preaches the truth would condone such things.” She frowned at Dee Anna, who took a deep breath and spoke softly, keeping her voice even.

“Yes, I know that some of those costumes may be a bit questionable…”

“A bit!” the little woman snorted. “Do you have any sense?” Mary gasped and patted her friend’s arm, “Please, Bonne, Pastor Dee Anna means no harm. She…”

Dee Anna smiled reassuringly at Mary. “It’s all right, Mary. I’m sure your friend doesn't mean to be disrespectful.” She turned to Bonnie and began again, “I am glad you feel strongly about spiritual matters. When we planned this event we knew there might be a bit of controversy, but children are going to celebrate Halloween one way or another, so we thought it would be good to have some fun right here at the church where we can also share some good news with the…”

Bonnie snorted, “So you are going to mix a gospel message with all this…this…evil? Don’t you know that light has no fellowship with darkness?

Dee Anna sighed softly. “I’m sorry you feel that way, Bonnie. I hope that when you see how we end the evening you will be reassured. My daughter, Madelaine, and most of the church kids are not wearing costumes or they are wearing less, um, less dark ones. But we are happy to have children and teenagers come here who might not show up for Sunday worship. Their moms and dads too.”

Bonnie interjected, “I don't much like fun and games in a church. Still, I was happy to help Mary decorate the sanctuary for a story and some singing, but when I arrived and saw what is going on here…well…I can tell you the ones who are happy about what is going on at this church right now are the demons in Hell!”

Afterwards Dee Anna could never understand how she had spoken the next words aloud. Mary had stared at her, confused, and Bonnie’s mouth had dropped open.

Dee Anna had replied, “Actually, speaking of Hell, I think the demons might mostly be happy about my bedroom closet.”
Posted by Dorcas (aka SingingOwl) at 8:50 PM