We just returned from the last fur-trade rendezvous re-enacting camp we will be at this summer. We had such a good time with Kris, Daryl, Trinity, Kevin and good friends Eric, Darla and Bob, and Cindy and Tommy.

The weather was wonderful (actually a bit hot, so maybe Kris and Daryl can have ripe tomatoes after all), and the company was good. Ken was in pain, but he says he'd be in pain anyway so he might as well be having fun...I'm not so sure, but he did win the archery competition. Meanwhile Kris won the woman's tomahawk throw. was 2nd in the skillet toss, and she came in third in the firestarting--and pie baking competition. I came in second, edged out of first place by ONE point....an upstart first-time pie baker received 100 pts. to my 99! Imagine! Actually, it was fun to see her surprise, and we all hooted and hollered and whistled. Here is a picture of Kris and me on our way to the competition. Kris' pie was apple/pumpkin and mine was strawberry peach. (The winning pie was apple. Go figure.) 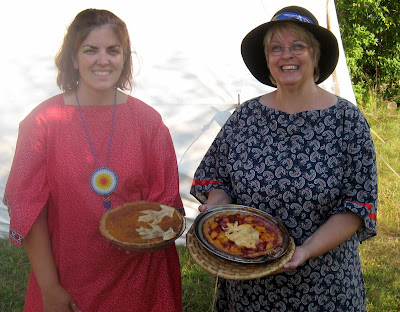 A good hot shower felt great, and now I'm going to have a bowl of sherbet and climb into bed!

P.S. I'll go over to The Owl's Kitchen and post the pie recipe. It will prove that sometimes simple recipes are best. I made it up on the spur of the moment. :-) But I'm going to make one again while I can still get fresh peaches and strawberries.
Posted by Dorcas (aka SingingOwl) at 8:05 PM

Wow, peach and strawberry! I would have never combined those. Now I must taste it!