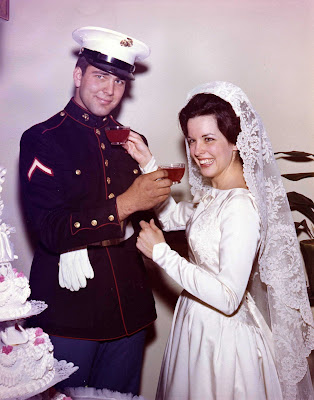 Thirty nine years ago today, I walked down the aisle at the Rosewood Wedding Chapel in Burbank, California. My late sister, Darlaine, was the matron of honor, my friend, Pat, was a bridesmaid, and my niece, Joy, was the flower girl. She refused to walk down the aisle, but she did pose nicely for the pictures. Ken's friend Bill, was one of the groomsmen. That was particularly fitting because he had introduced the two of us.
We meet in high school--not the same one. Ken attended a public high school in Sylmar, and I attended Los Angeles Baptist High School in a nearby town then known as Sepulveda. My school was relatively small, so Pat and I had to take Driver's Training at another school. We went over to register, and the rest, as they say, is history.
Ken was a tall, very skinny (yes, really) basketball player with a crooked smile and kind eyes. I was only seventeen, but it wasn't long before I was wondering if this was the guy I would spend my life with. When we married, Ken was only 19 and I was 20. The big Sylmar earthquake of 1971 had just happened. Ken's parents had purchased a home just days before. They ended up sleeping outside on the front lawn. Sadly, they never lived in the house again. The shop where the guys had rented their tuxedos was in an evacuated area under the San Fernando dam and we wondered if they'd be standing up in jeans and tee shirts. Just a couple of hours before the wedding they were able to go in and get their tuxes.
Ken was late...fortunately for me I was unaware. He was in the US Marine Corps and wore the USMC's beautiful dress blues. They weren't ready when he went to pick them, and he was a two-hour drive away. He made a flying trip to Burbank and arrived just moments before time to begin!
Good thing I don't believe in omens, or we might never have tied the knot!
We moved to Oceanside, where we lived in a tiny apartment and then in awful military housing. We weren't too concerned about that. Just over a year after the wedding we welcomed Kris into the world. Then we moved to North Carolina (Camp Lejeune). Six years after Kris, when we were stationed in Washington, DC, Josh joined the family. After nine years in the USMC we went to North Dakota to finish college, then on to Wisconsin where we pastored churches in Tomahawk and Luck. A few years later we moved to the other side of Wisconsin where Ken became a prison chaplain and I pastored a church....and now life goes on. 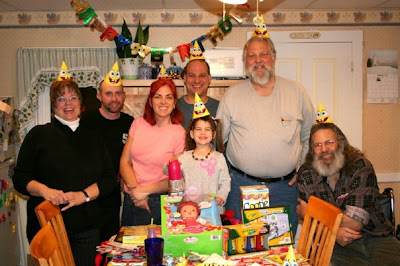 Here we are about a month ago celebrating Trinity's third birthday. I'm on the left, next to me is a friend, Kristopher, next is Kris, her husband, Daryl with Trinity below, then Ken and next to him is Kevin. 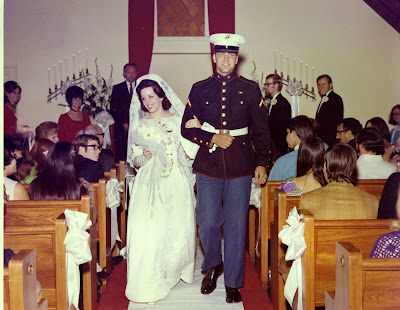 Off we go to start a new life together.

We have had some wonderful times, and some sad and difficult ones. But here we are, both wondering how we got so old so fast. Yep, we'd do it again. And Ken is still my Valentine! 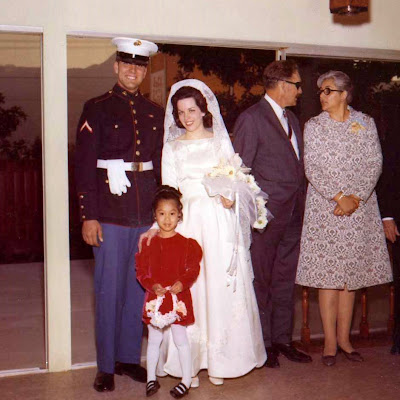 Happy Anniversary. I just love seeing the photos of then and now.

Wow, great photos and fun retelling of the story. More on your FB page.

Happy Aniversary! I had forgotten about Joy not walking down the aisle at your wedding - there have been a lot of memories being brought back lately, of course, but that is an amusing and whimsical one! Thanks!

Happy Anniversary .. and thanks for sharing this beautiful love story