Who Was This Man? 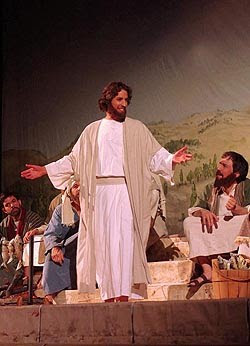 You have heard that it was said, 'Do not commit adultery.' But I tell you that anyone who looks at a woman lustfully has already committed adultery with her in his heart.

Again, you have heard that it was said to the people long ago, 'Do not break your oath, but keep the oaths you have made to the Lord.' But I tell you, Do not swear at all...

You have heard that it was said, 'Love your neighbor and hate your enemy.' But I tell you: Love your enemies and pray for those who persecute you...

When Jesus had finished saying these things, the crowds were amazed at his teaching,

Who is this teacher who can say such things? These things are impossible!

Jewish scholar Jacob Neusner wrote a book titled "A Rabbi Talks with Jesus," in which he says he is “impressed – and moved” by the teachings of Jesus, admitting that he would have joined the crowd following Jesus around. He also acknowledges that he would have parted company with Jesus, not because of Jesus' teachings but because he made demands that only God can make.
Several times Matthew says that Jesus taught as one who had authority. He unsettled and provoked people with statements like, “I and the Father are one”; “I have the power to forgive sins”; “I will rebuild the temple in three days.” Temple guards came to seize him but returned without him, saying “No one ever spoke the way this man does.” He commanded demons to be quiet. He befriended lepers and tax collectors and prostitutes. He forgave those who crucified him.

He asks us to do things that are simply impossible--apart from God's grace and indwelling Spirit. Who was this teacher? Jesus asked Simon Peter, “Whom do you say I am?”
He asks us the same question today. Does our intellectual belief match our "heart" belief, our actions, and our words?
Jesus had a way of stirring things up.
Posted by Dorcas (aka SingingOwl) at 7:23 AM

Who do you say that I am?

I've been thinking about this question lately, reading some research about the "historical Jesus". I'm no closer to the answer than I was before, unfortunately!

I have noted something occuring. Been thinking of you and your little family.