Remembering the People of the Gulf Coast 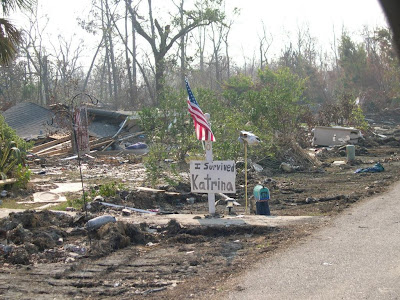 Last night I watched the National Geographic channel's decomentary Witness: Katrina. I had to turn it off before it was finished, because it was just too painful to watch. Seeing people headed into the Superdome, assuming that they would be uncomfortable but safe, was wrenching. Seeing people say, while holding a toddler by the hand, "I survived Camille so we will be fine...." made me feel almost ill.

I can hardly comprehend that five years have passed since my husband and I, watching the television coverage of events in New Orleans and the surrounding area, determined that we just had to help somehow.

We had heard that Convoy of Hope, one of our favorite relief organizations, was trying to get there, and we determined that we would hook up a trailer full of whatever we could gather and head for one of the places COV was setting up a base of operations.

My congregation collected water and medical supplies, and made shoebox packages for the boys and girls of the area. Each box contained some toiletries, something like crayons or a small toy, and each was brightly wrapped. We also had a washing machine that someone donated, and we figured that somewhere or other, there would be electricity and people who needed clean clothes.

Many phone calls and emails later, we headed for Gulfport and the First Assembly of God church there. We figured we would work in Gulfport, but plans changed after we arrived. We ended up spending our nights in Gulfport, in the ravaged but still partly usable church (and they did have electricity so got the washing machine), and travelling to what was actually the smack-dab center of Katrina's landfall, the little town of Waveland, MS. Waveland had been demolished. We saw only one home that looked like it might be habitable. Every single business was completely destroyed, except for one heavily damaged gas station that did manage to stay open.

What we saw was nearly indescriblable, and this was about two weeks after Katrina visited. I cannot even begin to fathom what the days immediately after were like. When we arrived it was still largely chaotic. I wrote a series of posts about our expereiences. If you should feel inclined to see them, and the pictures, you can click on "current events" in the sidebar, then scroll down and click "older posts" till you reach the Katrina series. I took many pictures, a few of which are posted in that series. As I said to a family member as I watched the National Geographic special, "Pictures just don't do it. Even these shots from people waiting out the storm and refusing to evacuate (!) don't do it. You can't imagine the stench, the piles of garbage, the eerie sight of orange grass and totally bare trees in 90+ degree heat and Mississippi humidity."

Sometimes I think of people we met in Waveland. I see the faces of my fellow workers, exhausted and drawn from hours of being on our feet in temperatures most of us were not accustomed to. I see the faces of children--Steven (called Bubba), the Alecia Keyes wannabe, the beautiful little blonde with the haunted eyes--and of people like the gorgeous 91 year old who sat down, exhausted and asked for ice water. I recall the nurse in a little makeshift clinic at First AG in Gulfport who almost cried when I brought her a glucometer. She was trying to help a diabetic woman, but she had no way of knowing what her blood sugar really was.

I remember the smiles and joking of doctors and nurses who were staffing a M.A.S.H. type tent in Waveland for hours on end with few supplies, the young National Guard soldiers, the two kind and very young policemen who had come to the Gulf from Ohio, FEMA volunteers who were really just ordinary citizens who had enlisted for the duration of the emergency and were trying to help with little backing.

Convoy of Hope worked in the K Mart parking lot. There was a makeshift store and a food tent. We handed out groceries, tents, clothes, "shoeboxes" to people from about six area towns. We saw some of the worst of human nature (hoarding, greed, selfishness) and some of the best.

I also was stunned by the level of invisibility and even disrespect from some church leadership there that seemed to happen just because I was female. I never wrote about it (seemed petty to write about it at the time, in the face of such misery), but it was eye-opening and disturbing. I sadly determined that I would not be leading a team there anytime soon, and I hoped that my male counterparts would do so instead.

I lost part of my heart to some of those dear, gracious, kind people who had nothing but still smiled, thanked us, and said, "God bless you people." One woman cried because I gave her a tee shirt that fit. She was pregnant, had nothing but the (filthy) clothes on her back, and it was her due date. I wonder where that baby was delivered?

I wonder about First Assembly, Waveland. It was completely destroyed by mold, and the pastor did not know who of his congregation had even survived. The Presbyterian Church was spared (a strange story indeed). Here is a bit of the story, copied from one of my blog posts from five years ago:

We stopped by to see how they [the AG pastor in Waveland] were doing, having been told that the church was a total loss. It was standing, but completely destroyed by mold and will have to be torn down. The pastor and his family are living in a little camper. The Presbyterian pastor was there too, and his beautiful, white-haired wife. The two families are good friends. The Presbyterian pastor's wife was the only woman I saw all week who had a "full face" of makeup on. Her hair was neatly combed, and she was casually but impeccably dressed. It was so unusual as to be striking....she showed us her only remaining possessions, five decorative plates that had been a present from her grandmother. She was trying to remove the remains of Katrina's mud, a sticky smelly substance that stuck fast. The AG church had some running water, so she was there using the garden hose. It was a very sad sight. Tears filled her eyes as she told us they had lost everything, but she smiled when she told us that the Presbyterian church had, miraculously, been totally spared--an amazing story. A man who was not part of their church, in fact had not darkened the door of a church for many years, was riding out the storm from somewhere near the church. He told the pastor and his wife that he watched the storm surge coming in, watched it part and go around the Presbyterian Church, and come together again as it passed!

I wonder if that pastor's wife got her plates clean?

When I got back I posted about it all, saying I'd likely never be the same. And I am not. I expressed a hope that one day I could travel to the place of horror I saw and view it in better times. I am thinking of that again, and I would love to take a trip to Waveland, Mississippi. The photogrph up above is from Waveland--my favorite of those we took. Please stop for a moment and join me in praying for the people of the Gulf Coast. Many neighborhoods in New Orleans are still ravaged, overgrown, uninhabited. Many people have lingering physical and emotional struggles because of what happened.
Posted by Dorcas (aka SingingOwl) at 12:44 PM

Thanks for sharing and Thank you for giving of yourself to the people of Waveland. Our teams have stayed in Waveland the last 5 times we've gone to Mississippi on work trips to the nearby town of Pearlington. While much has changed, there is still much to be done and the people are still full of grace and kindness.

Praying with you for those in the "forgotten" areas of Katrina.