Dinner With the "Carnies" 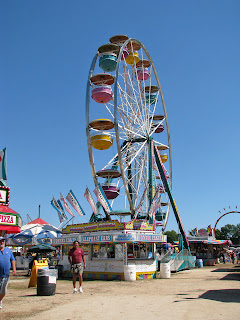 The kitchen/fellowship area of our church smelled wonderful last night. The tables were set invitingly. Large glass bowls contained a colorful fruit salad. There were crock pots of side dishes. One large roaster held fragrant rice and another contained chicken breasts and homemade gravy. Sodas were chilling in ice chests; coffee and milk were on a side table. Another table held an amazing array desserts. We were ready for visitors, who soon began to arrive, some in cars and others on a yellow school bus.

My daughter, Kris, and my little granddaughter, Trinity greeted our guests. These guests were the carnival workers who come to town each year for the annual county fair, held for four days surrounding Labor Day weekend. This was about the eighth or ninth year that Christian Life Assembly of God has held these dinners as a way to thank, bless, and honor people who provide entertainment for the town. The carnival workers, or "carnies," show up a few days in advance, and they work in the hot sun doing heavy labor. Some live in carnival "bunk houses" and those more fortunate may have some sort of small RV or trailer.
On Monday, some of us wander around saying hello and passing out bags of homemade cookies along with an invitation to dinner. Others cook or set up. Still others greet and serve and talk with our guests. Each year we see some familiar faces and some new ones.
Last night I met a young couple who were working their first year "on the circuit. They had left two children with relatives back in Florida and they are running a ride for the carnival because, as the young wife said, "There just isn't any work. Even at McDonald's. The economy's hit our town hard." Next to them sat a scrawny man with sinewy muscles and leathery skin burnt brown by too much time in the sun. He had about half of his teeth, which he regularly revealed as he laughed and smiled, joking with everyone. When I brought my plate over and asked if I could eat with them, he gave me a quizzical look and said, "You want to?"
Next to him sat a pleasant-looking woman about my age wearing a worn tee shirt and jeans. Her companion was bearded, talkative, the brunt of many good-natured jokes and, it seemed, a bit of a fatherly type to the others at the table. He had a tattoo of praying hands on his arm, with a gaudy rosary on the hands and MOM beneath. He told me, more than once, that we were "amazing people." I had an interesting conversation with a man directly across from me who was handsome in a sad sort of way. He told me proudly that he was "born and raised" in Wisconsin and that his daughter was attending Marquette University in Milwaukee. He's a little concerned about her and as he told me why his large eyes grew soft. His eyes were remarkable, very beautiful and expressive. He wants his daughter to stay in school more than he wants anything else, and he sends her some of his wages to help with the tuition.
A few tables over sat a large black man who looked a great deal like Shaquille O' Neal. He was quiet and very polite. Not far away was another black man, this one alarmingly thin and with a wild mass of hair. Next to him sat a man with wrinkles etched deep into his cheeks, long straggly hair and beard and an alarming amount of grease on his hands.
Like any society, this one has its own culture, inside jokes and lingo. The ones who run a ride, the jocks, tend to hang out together. Down a rung on the social scale are the "jointys" who man the booths of carnival games. Some run food booths, serving up mini donuts, cheese curds, cord dogs, and so on. Some people own their own food stand and they tend to set themselves apart from the rank and file "carnies." Carnival workers are often invisible to the townspeople who ride the rides, play the games (or try to) and eat the carnival's junk food. Like homeless people, we tend to simply not "see" them.
Each year they seem genuinely grateful for the home style meal, the conversation, and the chance to cool off in air-conditioned comfort. Some are obviously trying to clean up their language or be more polite for us church folks. Others use profanities with complete oblivion to their surroundings. They are, many times (most times?) broken people with tragic mistakes and circumstances in their lives. Some would not survive outside the hard-working, hard-drinking and partying world of the carnival and have been there for many years. Others hope that their stint with the travelling shows will be short. Some don't think beyond the next day.
As they left, Kris and I said good bye and Kris offered hugs. Some declined, almost looking afraid. Other hugged her like their lives depended on it, sometimes with tears in their eyes. It made me wonder if the last hug a couple of them had received had been a year ago when they came to dinner.
Kevin, Ken's brother who lives with us now, spent several years on the road as a carny after he had burnt his bridges with most of the family. He told me a story of what happened once when, remembering going to church with Ken and me when he had lived with us for a year (as a teenager), he tried visiting a church once when he wasn't working on a Sunday (rare). What happened wasn't pretty.
God loves them, and they are some of "the least of these" for whom Jesus lived and died. If you see some of them, look at them and say, "Thanks for helping us have some fun!" They don't hear that very often.
Posted by Dorcas (aka SingingOwl) at 9:37 PM

What a beautiful ministry. Your description of these people reminded me of the people who used to accompany the little carnival that used to come to our town. Used to. I think that insurance issues killed that. I never used to think about these people's lives, only that they were so different from me. These days I realize how much we fall into a certain culture or group, but we don't always have the option of "choosing." May God continue to bless this ministry.

yes indeed blessings on a wonderful ministry... such a beautiful story, and a sad story too. my father as a kid, who had run away from the orphanage, was "adopted" by the carnies... he mucked stalls and did odd jobs for a little bit... and he always remembered they were like a family.