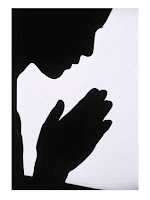 Every Tuesday I visit the prison where my husband is the chaplain to lead a group called, "Principles for Successful Living." We are slowly working our way through the Sermon on the Mount, Jesus' "principles for successful living." Last week we started our perusal of what is commonly called "The Lord's Prayer" or, by Catholics I know, "The Our Father" (from the first two words).

It was, as always an interesting mix of people.
A. is the gracious, grey-haired, educated and erudite one, probably older than his smooth dark skin would reveal. He's been inside a long time. He was educated before he came in, a professional person who used his position to commit a terrible crime. He is straightforward about how he wrecked his own life, and he offers no excuses except to acknowledge that he was arrogant and prideful. He is a pleasure to have in the group. He hopes to be moving to another institution soon, preparatory to finally going home to Milwaukee. Not a week goes by that he does not mention his beloved wife, a church-going, pillar of strength who loved him dearly in spite of his sins. It was a while before I realized she died while he was inside.
B. is a little scary. Oh, not in the group. I am never afraid when I'm there. Like A., he has been in prison a long, long time. I don't know what he did to get there, and I don't know if I want to know. He is a man who longs to be a better person, who wants to help others, who faithfully attends church, sings in the choir, comes to every study he can. He is also moody, and he has a "dark side" that I can, sometimes, see. He knows it and I think it is scary for him too.
C. is a tall, lanky, black youth who looks like a sort of goofy "kid next door." He doesn't seem to have a mean bone in his body, and I suspect he is one of the many felons who got caught up in a life of crime by helping someone else with more brains and brawn. He always tells me he is praying for me. Sometimes he tells me more than once. He has big dreams of doing "great things for God." I just encourage him to do small things in a big way. He makes me sad.
D. is quiet, pale, always leaning forward as if he doesn't want to miss a word. When he does speak I am surprised at what comes out. He does listen well!
E. is a little cocky. He has some talent, and it seems that every inmate with a little talent blows it up into a MAJOR talent. Pride and arrogance are epidemic inside the walls of prison. But he listens too. Interesting guy. Chatty, smart, and also has a barely concealed dark side.
There are more. It is never the same group, though there are some who are pretty regular. Inmates come and go, get new work or school assignments, and so on, so I know they may only sit in that small room with me once or twice. I try to make it count. I try not to waste words. I try not to be judgemental, but I also want to be straightforward. They don't need a "do-gooder" who feels sorry for them. (I do, but I try not to let that ever be uppermost.)
I'm heading over there after I go cast my vote in the primary.
Last week our discussion of the Lord's prayer was powerful. Much more honest than what often happens in a church. Our conversation centered on being thankful for blessings, even in unlikely places (like prison). Jesus' teaching prayer shows us, among many other things, that we begin by acknowledging it isn't all about us. Our thoughts first go to God, God's holiness, rule, provision. Only later do we turn prayerful thoughts to others and to ourselves. Prison prayers are often about needs and asking for things. This time we just thanked God for something.
The last prayer, from A., was a praise for being in prison. He thanked God for stopping him before he did more damage, for humbling him, for protecting him from himself, for saving his life by "sending" him behind bars. He then thanked God for those who have taught, loved, mentored, and "set him straight." "Thank you God, for this place" was his last sentence. I have genuine hope for A. It takes a humble man to thank God for prison.
They teach me something every week. I do not know if I understand anything about true gratitude!
Posted by Dorcas (aka SingingOwl) at 9:05 AM

What a blessing to see God working in the lives of these men, however big or small.

Pride is such a wretched thing...why do so many of us embrace it like a friend?

My husband told me this a.m. that "A" has relocated to that other institution. He will be attending culinary school. Ken says he told him to say good-bye to me and to thank me, and our daughter, for our ministry to him. He was teary-eyed. Please pray for him with me, will you? He is a man I've grown to love.