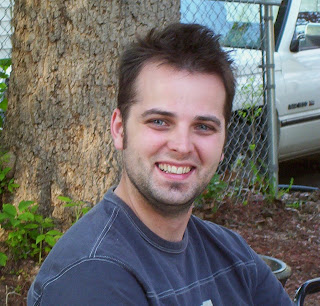 Thirty-three years ago today, I woke in the wee hours with some definite signs that labor was underway. This was baby number two, so I figured it wouldn't be long before we would welcome our new family member into the world. A while later I was at the hospital and nothing was happening. I paced. I paced some more. Once in a while something significant would begin, but then stop. Hours later, the dreaded Pitocin drip was started. More hours went on. Something was amiss, it seemed, but an x ray showed that the baby inside was not too large, so we waited.

Then things got exciting, but not in a good way. The fetal heart beat was too slow and there were signs that the little one who was on his way was stressed. I was prepped for a C-Section. The doctor was obviously concerned and things were a bit grim. He tried to gently warn me that all was likely not well.
Ken called our church's prayer chain, and before they could get things set for the C-section, Josh entered the world. Unlike his older sister, who entered the world squalling in protest, he only cried briefly. He did manage to send a healthy stream of urine onto the doctor, who laughed and said, "Well, we know his water works are functioning fine." I'm not sure what the doctor had expected, but he was clearly happy to see this healthy child. Josh was a beautiful newborn, with brown hair and the most intense blue eyes I had ever seen. When I held him those large eyes looked up at me. They weren't cloudy, as newborn eyes often are--they were clear and focused. He seemed to be gazing intently at us.
That is how I remember my baby boy most, a beautiful child who quietly watched the world with great intensity, often awake and usually watching the world closely.
He became a shy boy with a sweet disposition, the delight of all of us and the favorite person of his big sis, who was six years older. I can picture them, Josh doing his best to keep up. They were an interesting pair, those two, opposites in many ways (and that is still true). Josh was the cautious one, the saver, the neat kid. He works at night, so the morning person we all used to know has disappeared these days, but Dad and Sis and I all vividly recall how he often woke us up by singing church songs happily in the morning. His favorites were, "I'll Fly Away" and a Pentecostal standard I am sad to say doesn't get sung much anymore, "Not By Might."
He's not shy anymore. But he still cares about people, more than he sometimes wants anyone to know, and he still has a great voice.
Happy Birthday, Josh. I'm so glad you are in the world!