The Oasis at St Nazianz Part 1

I have not had much to say for a while.  Now it seems time to begin sharing a story.  Some people may find the story interesting from a historical point of view.  Some may think I am superstitious. Or silly.  Or some sort of religious nut.  Some of the story seems, even to me, the teller, a bit odd.  Mystical.  Fanciful.  I know that.  But it is the truth, as much as I can make it.  I am not trying to make any sort of point.  I just feel the need to begin telling a story that I don't quite understand.

About ten years ago on a sunny summer morning, I stopped working on a sermon for the church where I was serving as pastor. It was a lovely summer day, and Deena, another woman pastor (from a Methodist church not far away) had suggested a ride out to the "old JFK Prep."  She seemed surprised that I did not know what she referred to, but she promised to fill me in on the ride over.  Someone, a "friend of a friend," had purchased the property and had invited her out to take a look.

We drove through the farmland that covers most of the area where we live, and as people who live in a rural area often do, we talked of the weather and admired the lush fields of corn, alfalfa and soy beans.  We talked about our respective congregations, our families, her daughter's excitement about preparing to show off her horse at the county fair.

Finally, my companion talked a little about where we were headed. The abandoned property, she told me, had once been a campus that began as a Catholic seminary meant to train those who were considering the priesthood and then late became a somewhat prestigious private high school. There was a short-lived orphanage (a century ago), a small nunnery, dorms, a large boiler plant, and so on. She said the place had hosted dubious Halloween parties, was rumored to have been a spot for major drug deals involving gangs from Chicago, and she added that there had been plenty of late-night vandalism over the years. 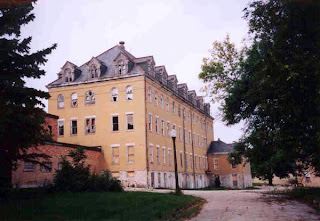 Then conversation trailed off as we arrived at an imposing stone gate, crosses etched into large granite posts.  Beyond the gates I saw many beautiful old trees with gnarled and twisted trunks, lushly green grass, and a gently curving landscape.  The JFK Prep School building, abandoned more than 20 years earlier, was directly ahead, visible beyond the trees.  "Why," I said in surprise, "It is beautiful!"

The ruin of what had obviously once been an imposing church stood sentinel on our right, a blue tarp covering part of the roof.  A square bulding (pictured) and a long, low building of more modern origin was attached to one side.

No one seemed to be around.  We pulled up on weed-studded gravel in front of the church and approached the door.  It was partly off its hinges and cracked and peeling paint hung in long strips.  I could see that the church still had its beautiful stained glass windows, and I was surprised that they seemed mostly intact.

We glanced at each other.  I remember gazing up at the steeple, wondering if there was still a bell.  I noticed how intensely blue the sky was, a few clouds, white and puffy, the sun bright and warm. It all seemed strange, incongruous, in stark contrast with the ruins around us. 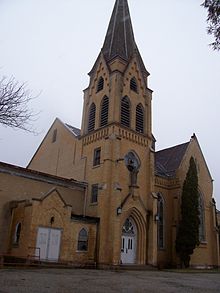 "How terrible to let this place just....just waste away."

"What if we get in trouble?"

So without much difficulty we stepped over broken stones and squeezed in the door.  A stained glass portrayal of St. George slaying the dragon, vivid and beautiful, greeted us.  We were assaulted with the stench of rot and mold.  The pews, still in place in the long sanctuary, were mostly sound, but the communion rail was broken.  The walls were defaced with graffiti, some obscene, some occult, some just silly.  Debris covered much of the floor.  But the windows, tall and glorious and ablaze with color, arose on each side of the ruined sanctuary.  Rays of sunlight poured over us, illuminating the artistry of a century ago.

We stood for long moments in silence.  Then one of us whispered, "The windows--glorious aren't they?"

"And...and all this ruin and graffiti and vandalism...and yet the windows aren't shattered."

"Why are we whispering?

The two of us, Protestant ministers, made our way up the center aisle and onto the altar area of this historic Catholic sanctuary.  In spite of the ruin, the overwhelming odor, the graffiti, we were silent, feeling a need to be reverent.  To the right of the altar was a smaller window, it's purple, blue and red glass particularly striking.  I stared at it for a long time before we walked back through a sacristy, its damaged wood cabinets retaining some of the beautiful craftsmanship of  long-ago.

We squeezed through a partial doorway and walked down a hallway lined with small dormitory rooms, complete with tiny sinks.  Some still had faded and tattered curtains in colors popular in the '70s, a bed or two.  We agreed that if someone could afford the cost of restoring the site, it would be a wonderful place for a retreat center, a shelter, a refuge.  I thought of the silent retreats I have participated in at the beautiful Norbertine Center for Spirituality in DePere, a place I love.  This should be, I thought, a place like that.

We turned back to the church.

The sadness was almost overwhelming.  It was, in the way only abandoned places can be, eerie.    And yet, it seemed to me, it was holy too.  I turned my head, hiding the tears in my eyes.  This was just wrong.  This place was beautiful and terrible.  It had been built as a place to honor God and I didn't want to think of what might have happened within the church walls over the years.

We left the church and crossed the drive to enter a back door of the school.  We didn't go far.  The floor was covered in a deep layer of dried mud and dirt, and it was dark.  And it was very spooky in a way I can't describe.  The hair on the back of my neck stood up as my companion said, with a forced grin, "It feels...not good in here.  We'd need a gallon of anointing oil to pray over this place..."  She forced a grin, but she wasn't joking.  We exited, grateful for the sun on our faces, and headed over to the former gym, which seemed to be the soundest building on the property.  It was unlocked and someone had turned on the old halogen lights, so we figured the owner must be somewhere about.

"Wonder where the electricity is coming from?"

We decided not to visit the nearby cemetary. We could see the small chapel and some of the graves on a nearby knoll, but we both felt, I think, overwhelmed with the beauty and the lonliness and the sadness of the place--and the senselessness of its present state of decay and ruin.

It was time to go.  We climbed into the car and drove down the exit road and out through the stone gate, silent pillars to a bygone era.

"It would take a fortune to restore that place."

"But something should be done.  I wonder if the new owner is a billionaire?"

"I was told she wants to make the gym an art center of some sort."

I'll share more in the next entry.  For those who are interested, here are a couple of links.   I'll share more links in a future post that will show you some more of the story.

This first link has some history, a lot of "hooey" and some good pictures of how the site looked around ten years ago, about the same time I visited with my pastor friend. Some things have not changed much. The blue tarp on the church has been replaced with a temporary roof. The boiler building is largely renovated inside, and provides a pleasant home for several families. Sadly, some of the beautiful church windows now have holes in the glass. But you will get a sense of the beauty, and the sadness, of the place as it was a while back.
http://www.infiltraterz.com/jfkchurch.html

From Wikipedia, about the church and the founders, and I'm not sure why the link isn't working, but just click on the link at the top of the Wikipedia page, "Are you looking for___?" and for some reason it works that way: http://en.wikipedia.org/wiki/St._Ambrose_Church_(St._Nazianz,_Wisconsin)

I think we may have seen these buildings one time when we've taken side roads from to Reedsville. Sis on law's Family has the flower farm Solaris Farms just north of Reedsville. It is unlikely that there are two old RC places in that general area.