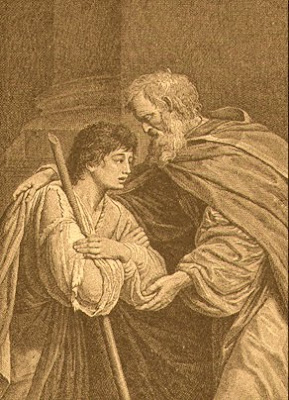 A man had two sons. The younger son told his father, ‘I want my share of your estate now before you die.’ So his father agreed. This younger son packed all his belongings and moved to a distant land, and there wasted all his money in wild living. About the time his money ran out, a great famine swept over the land, and he began to starve. A local farmer sent him into his fields to feed the pigs. The young man became so hungry that even the pods he was feeding the pigs looked good. When he finally came to his senses, he said to himself, ‘At home even the hired servants have food enough to spare, and here I am dying of hunger! I will go home to my father and say, “Father, I have sinned against both heaven and you, and I am no longer worthy of being called your son. Please take me as a servant.'

He returned home and while he was still a long way off, his father saw him coming. Filled with love and compassion, he ran to his son, embraced him, and kissed him. His son said to him, ‘Father, I have sinned against both heaven and you, and I am no longer worthy of being called your son.’ But his father said to the servants, ‘Quick! Bring the finest robe in the house and put it on him. Get a ring for his finger and sandals for his feet. And kill the calf we have been fattening. We must celebrate with a feast, for this son of mine was dead and has now returned to life. He was lost, but now he is found.’ So the party began.

Meanwhile, the older son was in the fields working. When he returned home, he heard music and dancing in the house, and he asked one of the servants what was going on. ‘Your brother is back,’ he was told, ‘and your father has killed the fattened calf. We are celebrating because of his safe return.’

The older brother was angry and wouldn’t go in. His father came out and begged him, but he replied, ‘All these years I have slaved for you and never once refused to do a single thing you told me to. And in all that time you never gave me even one young goat for a feast with my friends. Yet when this son of yours comes back after squandering your money on prostitutes, you celebrate by killing the fattened calf!’

His father said to him, ‘Look, dear son, you have always stayed by me, and everything I have is yours. We had to celebrate this happy day. For your brother was dead and has come back to life! He was lost, but now he is found!’

I know that the parable is about the boundless, generous and loving grace of God to us, his sometimes wayward (and extravagant children, children who sometimes waste his good gifts and ignore his love). In context, Jesus has just told the parable of the lost sheep and the shepherd and the lost coin and the housewife, so we know that it is about the father's joy upon his son's return.
But even though Jesus' parables are simple and short, if we spend some time pondering them we find that they often are many-layered. I don't like the section labels that many translations insert into passages (usually this one is tagged,"The Prodigal Son"), and I think the story is more about the father than about the thankless child. What do you suppose was happening in this home before the son took off, or how might the father have felt? Or try imaging that you are the unseen mother in the story. Or the farmer who takes in a Jewish boy who is willing to feed pigs.
I grew up in church, so this story is so familiar that, frankly, it is difficult to read it with "new" eyes. As a child, I appreciated the love of the father, and I even smiled at the image of him dashing down the road, robes flapping around his ankles. However, I never felt any resemblance to the prodigal son. I was not prodigal (a word which does not mean backsliding or ungrateful or runaway, but means carelessly extravagant). I don't know what it feels like to be carelessly profligate with either my money or my behavior. I was always distressed by the younger son's lack of love for his clearly loving parent. I never hurt anyone if I can avoid it, and I'm generally self-controlled and thoughtful about what I determine to do--sometimes too much so.

Some time ago, while in the midst of a devastating situation, I realized that the one I absolutely could identify with was the elder brother. I read the story, and for the first time I did not see him as simply unreasonable, jealous, and bitter. I saw him as hurt. I related to the resentment, the frustration, the sense of feeling invisible--maybe because he had been too good!

I wondered why it was that nothing seems to have come easily in my life. Why did I try so hard only to feel ignored and overlooked? Why did I hear stories of others being healed while I, and even more significantly, my husband, were not? Why did it seem to count for nothing with God that I had been honest, faithful, ethical and had tried hard to love my enemies?

This unsettling insight, and my subsequent conversation with God about it all, did not completely end my struggle in this area. I'd love to relate that God and I cleared it all up and that all is different now. I can't do that. Not yet. Maybe someday.

Typing this "confession" out now brings tears to my eyes and a heaviness to my heart. It was only a month or so ago that I said to someone dear to me, "Why is it always me who does the hard thing? Why do I do it? It never does any good!" It is quite likely that my frustration and my questions will not be answered.
What helps me in this story is the realization that my Heavenly Father says to me, "Dear daughter, everything I have is yours and always has been." Perhaps this older son needed to pay attention, or needed to be more honest about his feelings, or needed to recognize all that was already his because of what his father had done for him, or...?

In the end, the prodigal younger son would not have had a party every day. Next day it would be time to get back into the swing of work and responsibility. The ring and robe were put back in the cedar chest and life went on. And he had, after all, spent his inheritance. Even though he was forgiven and loved and back in the family, he had created difficulties that would likely affect him for the rest of his life. The faithful son would have been better off in many ways, I expect.

I know the story is a parable, but if the story were about a real family I'd find myself hoping that Elder Bro found the strength to face his hurt, his anger, and his resentment, to confess them honestly and to receive the open-armed embrace that I have no doubt would have been offered to him.

Which brother are you? Both are loved, both are forgiven, and both are still children of the Father.

God, I still struggle with this story. I think it is very likely that I'm not the only one who does. I pay that our hearts will not be closed or hard, as it seemed happened in the story. I ask that both the returning runaways and the faithful, and sometimes seemingly overlooked, children of your house will find the strength to confess our sins, share our hearts honestly with you, forgive others, wish blessings for them, and refuse the path of either carelessness or bitterness. Forgive us our sins, dear Lord of grace. Amen
Posted by Dorcas (aka SingingOwl) at 4:16 PM

Sister SingingOwl...Girl, can I relate! Thank you and I hope you're feeling my warm embrace from one kindred spirit to another.