What We Do for Approval

The tragic and sordid tale of John the Baptist's death is the subject of numerous paintings. This one, "Salome Receiving the Head of John the Baptist" is by Bernardino Luini and hangs in the Louve. Somehow I suspect that her attire was not nearly as modest as the painter depicts. 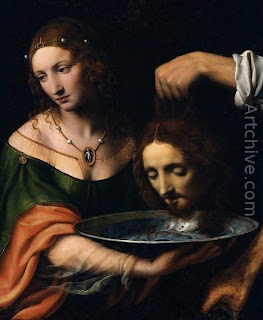 Mark 6:13-29
They cast out many demons, and anointed with oil many who were sick and cured them.
King Herod heard of it, for Jesus' name had become known. Some were saying, "John the baptizer has been raised from the dead; and for this reason these powers are at work in him." But others said, "It is Elijah." And others said, "It is a prophet, like one of the prophets of old." But when Herod heard of it, he said, "John, whom I beheaded, has been raised."

For Herod himself had sent men who arrested John, bound him, and put him in prison on account of Herodias, his brother Philip's wife, because Herod had married her. For John had been telling Herod, "It is not lawful for you to have your brother's wife." And Herodias had a grudge against him, and wanted to kill him. But she could not,for Herod feared John, knowing that he was a righteous and holy man, and he protected him. When he heard him, he was greatly perplexed; and yet he liked to listen to him. But an opportunity came when Herod on his birthday gave a banquet for his courtiers and officers and for the leaders of Galilee. When his daughter Salome came in and danced, she pleased Herod and his guests; and the king said to the girl, "Ask me for whatever you wish, and I will give it." And he solemnly swore to her, "Whatever you ask me, I will give you, even half of my kingdom." She went out and said to her mother, "What should I ask for?" She replied, "The head of John the baptizer." Immediately she rushed back to the king and requested, "I want you to give me at once the head of John the Baptist on a platter." The king was deeply grieved; yet out of regard for his oaths and for the guests, he did not want to refuse her. Immediately the king sent a soldier of the guard with orders to bring John's head. He went and beheaded him in the prison, brought his head on a platter, and gave it to the girl. Then the girl gave it to her mother. When his disciples heard about it, they came and took his body, and laid it in a tomb.

There is so much wickedness alluded to in this short passage. We first read that King Herod has a guilty conscience, and then we find out why. The catalogue of sin in these verses reads like something we might see on Jerry Springer, doesn't it? First there is an illicit relationship between Herod and Herodias, jealousy, murderous rage, deception, likely a drunken debauch (what else accounts for a king promising "half his kingdom" because of a girl's dance?), lust, foolishness, a mother involving her daughter in murder. Of course, the result of it all is an almost unspeakable horror.

The great and good John, miracle son of Elizabeth and Zachariah the priest, herald of Jesus the Messiah, preacher, baptizer and prophet--this man is the prisoner of a maniacal puppet king. Herod is afraid of him, but Herod is captivated by him as well. He knows there is something special about this man of God, and he resists Herodias' wish that Herod get rid of him. He even likes to listen to John's words.

Then comes the night of the big party, a night that ends with the prophet's head on a platter. As I read this familiar story, I noticed something. I had always assumed that the king was the victim of his drunken lust--caught in a despicable promise made while inflamed with a loathsome passion.

But look again. "The king was deeply grieved; yet out of regard for his oaths and for the guests, he did not want to refuse her." He likely knew that Herodias was behind the request. He was "grieved," and he knew he was about to do something vile. The first part of today's scripture lets us know he was later haunted by his deed.

But the trap cleverly laid for the king wasn't simply his lust or even his incredibly foolish promise to Salome. It was pride. Quite simply, he killed John because he did not want to lose face in front of his guests.

One of the fears common to humankind is of rejection. In my experience, this fear is almost universal and is often deeply rooted. How often we hear of someone doing a foolish or even horrible thing because of peer pressure, because they were showing off, trying to fit in (usually with the wrong people), trying to seem like something bigger and more important than they were. In that, we may have more in common with Herod than we like to think!

I was compelled to take a look at my own life, my own heart. No, I have not done anything remotely like Herod did, but I had to admit to myself and to God that many, perhaps most, of the foolish things I've done in my life were because of a misguided attempt to fit in or to please people. Because of pride born of fear.

As we come nearer to remembering the last days of Jesus' life on this earth, it seems an appropriate time for us to invite the light of God's holiness to illuminate the darker corners of our fears. We can do so with confidence, even though it might be difficult, because we know that God's mercy is abundant, his grace is boundless and his forgiveness is available to all.

Light of the World, illuminate our hearts. Leave no hidden closet, no little private sin, unseen. Darkness builds strongholds in the secrets of our lives and reinforces them by our denial and our silence. Forgive us our sins as we forgive those who sin against us, and cleanse us anew by your Holy Spirit of grace. Remind us of who we are, to whom we belong, and what we are called to be. Amen

Posted by Dorcas (aka SingingOwl) at 1:52 PM