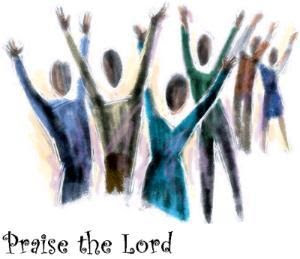 Oh, give thanks to the LORD, for He is good! For His mercy endures forever.

Hosanna! Blessed is He who comes in the name of the LORD! The King of Israel!

Let this mind be in you which was also in Christ Jesus, who, being in the form of God... made Himself of no reputation, taking the form of a servant, and coming in the likeness of men. And being found in appearance as a man, He humbled Himself and became obedient to the point of death, even the death of the cross.

Hosanna! Blessed is He who comes in the name of the LORD! The King of Israel!

Let Israel now say, His mercy endures forever. Open to me the gates of righteousness; I will go through them, and I will praise the LORD. This is the gate of the LORD, through which the righteous one shall enter. I will praise You, for You have answered me, and have become my salvation.

Rejoice greatly, O daughter of Zion! Shout O daughters of Jerusalem! Behold, your King is coming to you; He is just and having salvation, lowly and riding on a donkey, a colt, the foal of a donkey.

Oh, give thanks to the LORD, for He is good! For His mercy endures forever!

A great multitude that had come to the feast of the Passover, when they heard that Jesus was coming to Jerusalem, took branches of palm trees and went out to meet Him, and cried out: Hosanna! Blessed is He who comes in the name of the LORD! The King of Israel!

Then Jesus, when He had found a young donkey, sat on it; as it is written: “Fear not, daughter of Zion; Behold, your King is coming, sitting on a donkey's colt." His disciples did not understand these things at first; but when Jesus was glorified, then they remembered!

Therefore God has highly exalted Him and given Him a name which is above every name, that at the name of Jesus every knee should bow, of those in heaven, and of those on earth, and of those under the earth, and that every tongue should confess that Jesus Christ is Lord, to the glory of God the Father.

I was thinking a lot about all this praise stuff today that I knew we would have in church (see my FB status update) and wondering if we really should be doing that. But during the service, we had the long reading of the whole story of the whole last week of Jesus. Then I remembered why some years ago, "they" (who??) started calling this Passion Sunday instead of Palm Sunday. And we've very often had some kind of dramatic reading or a showing of slides of art work or some way to have the whole story, not the "high" of Palm Sunday followed by the "high" of Easter. That's all people get if they don't do the depths of Maundy Thursday and Holy Friday.

In my childhood church, we were shown movies of the passion events (not the Hollywood movies, but still good.) I get goosebumps when I think of Peter saying, "who me, I don't know him." and then the rooster crowing, and then Jesus, walking on the other side of the court yard glancing over at Peter. Yes, then Peter got the message.