1 Corinthians 12:27-13:3
Now you are the body of Christ and individually members of it. And God has appointed in the church first apostles, second prophets, third teachers; then deeds of power, then gifts of healing, forms of assistance, forms of leadership, various kinds of tongues. Are all apostles? Are all prophets? Are all teachers? Do all work miracles? Do all possess gifts of healing? Do all speak in tongues? Do all interpret? But strive for the greater gifts. And I will show you a still more excellent way. 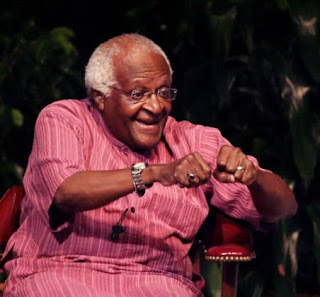 A few days ago I heard an NPR interview with Archbishop Desmond Tutu. It was remarkable because, even simply listening to his voice on my car radio, I could sense something of what it would be like to visit with him in person. His humor, gracious manner, and gentle humility were a lovely start to my day.

He shared that he had always loved church and recalled a childhood memory of often singing the song, "If God be for us who can be against us?" Then he sang the song, and as he finished he said, "I recalled that song later in my life when the big challenges came. If God be for us, and I knew God was, I also knew we would ultimately prevail."

He went on to relate that he had contracted tuberculosis at a young age and had spent nearly two years confined to a TB hospital. He observed that those patients who coughed up blood were all dead a short time later. Then came a day it happened to him, "It just gushed," he told the interviewer. He went on to say that he sat on his bed and talked to God. "I told God that my life was His to take or to save, and in that moment of complete surrender 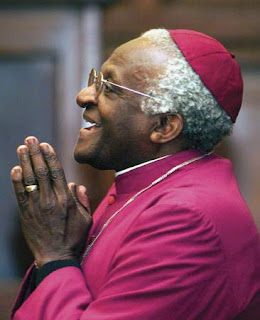 He said that as he has grown older he is more content to be in silence with God, "Not always bringing my laundry list of needs but just sitting with God. It is like how it is to sit quietly and peacefully by a fireplace. No words need be spoken, but the warmth is there."

He spoke of love being the greatest aim of believers, and added that Nelson Mandela had been a amazing example of that as, after 30 years of imprisonment, he urged South Africans to forgive those who trespassed against them. He concluded by reminiscing about someone whose name he never mentioned. I think it is likely that he did not recall it. But the memory of the man himself, a bishop, was still fresh. Tutu said, "He loved and cared like no one I had ever known. I wanted to be a doctor, not a priest, but I think without either of us really being aware of it, he was a role model for me. I loved to follow him and observe his way with people"

I smiled, driving along, because I could picture the nameless clergyman, leaning over from Heaven and smiling as he heard this famous man speaking of a long-ago influence of God's love. He, of course, would have had no idea that the young "urchin" (as Tutu called himself) who loved to travel around villages with him would one day grow to be one of the most well-known ministers in the world.

God, thank you for brethren like Nelson Mandela and Desmond Tutu and for the many like them whose names we do not know. Thank you for those who are shining examples of the power of love to transform and heal lives--and even nations. Bless those who, like the unknown Anglican priest, labor quietly but whose lives will leave ripples that go on and on. May I be such a person, leaving behind a legacy of love that only comes from your divine heart. Amen
Posted by Dorcas (aka SingingOwl) at 6:50 AM

Like you Singing Owl...When we gather by the river I hope I can say I was a small pebble that left ripples gently washing over the souls of those in need. Thanks for sharing this and God bless:)

Desmond Tutu is one of my heroes. Not for all the big things he's done, but for one of the little ones. The year he won the Nobel Prize, he was a guest professor at my seminary, and it was my job to clean his apartment. My beloved grandfather was ill that fall and the community had been praying for him. He died, and I left for several days for his funeral. The day I returned was the day the Nobel Prize was announced. I stood on the seminary grounds with my friends, discussing this wonderful and well-deserved honor. Just then, Bp. Tutu came out of the front building with photographers from the press around the world. He looked in my direction, and I waved, calling out my congratulations. He excused himself from the 40 or so journalists, walked over to me, gave me a hug, asked how I was, and assured me of his prayers for my family. He then went back to being the center of the world's spotlight for the day.

What amazing compassion and love, that on what must've been one of the greatest days of his life, he could take time to remember the grief in my life. Yes, indeed, he leaves a legacy of love, one I will carry with me always.

That brought tears to my eyes, Betsy! Partly because they are close to the surface today, but not JUST for that. :-) Thank you so much for sharing this personal story. Just more confirmation that he is exactly what he seems to be. May his tribe increase!

It is a joy that sometimes people really are exactly what they seem to be!

I will add that it was with great delight that I called my grandmother later in the day to say, "Guess what, Grandmommy? You have a Nobel Laureate praying for you!" :-)