What Happened to the Celebration? 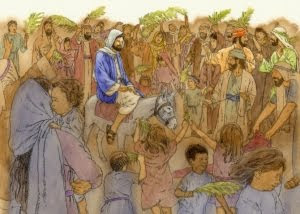 Just a few more thoughts about the triumphal entry before moving on...We began this week reading the story of Jesus' entry into Jerusalem. As we saw yesterday, only Jesus understood the irony that was unfolding. What happened to the celebration? The shouts of praise all too soon will turn to cries of “Crucify him!”

What happened to Judas? The disciples were with Jesus during his entry into Jerusalem. Judas was probably caught up in excitement along with the others. Yet two days later he makes a deal to betray Jesus. What happened in the meantime? Many scholars believe that Judas was from a family who resisted Rome and plotted overthrow. Perhaps Judas was disillusioned.
And then the incident at Bethany happened. Mary anointed Jesus for burial, as I wrote about here, and Judas complained. Jesus was having none of it and in front of everyone he told Judas, "Let her alone!" And once again the one who is supposed to be the conquering King spoke of his death. What happened to Judas? Resentment.
What about Peter? Peter was in the palm-branch-waving crowd too. He was probably the loudest in the group! And shortly thereafter, he told Jesus that he would never leave or betray him--in fact he will die with him if need be. A short time later he curses and swears and says he does not even know Jesus. Not once but three times! What happened to Peter? Fear.

The crowd along the road on Palm Sunday realized that Jesus is fulfilling an ancient prophecy. He is declaring himself Messiah. The hosannas and cries of him being King are really an appeal for Jesus to help them, to deliver them from their hated oppressors, the Romans. Later, after Jesus is arrested, the religious rulers stir up the crowds and inflame them into crying angrily “Crucify him!” This pitiful man cannot overthrow anyone! They have been fooled. What happened to the people? Disappointment.
And speaking of the religious rulers, the scribes, Pharisees and Sadducee, I think some of them knew that Jesus was a good man, even perhaps suspected that he might be the promised one. Why didn't they help him? Why didn't they rejoice? Because they have become, more than anything, a political party, interested in their own power and prestige. This Jesus will upset the situation. He must go. What happened to some of the leading Pharisees? Jealously and pride.
We are pretty had on the Pharisees sometimes, imagining we would never be anything like them. The fact is, WE ALL STRUGGLE WITH THE SAME THINGS! Disappointment and disillusionment, fear, jealousy, resentment, confusion, and pride are common to mankind.
Can you think of any situations where religious leaders hid their sin, or smoothed something over that should have been revealed, or kept quiet because of position or power? Ah, where do we start? And what about us?

It was a curious sort of day. A day which began with a parade and praises to the Lord. It's a day of wonder as we remember that Jesus entered Jerusalem in triumph with all the pomp and circumstance of a beloved king. It is tempting to just stay there and give little thought to what will happen next. Thursday brings a last meal with treasured friends, and a new covenant of love and forgiveness, but it also brings betrayal and denial.

And then it's Friday, a day of accusation and fear. A day of wrenching torment and brutal death. All too quickly the shouts of "Hosanna!" will give way to the call to "Crucify him! Crucify him!"

As you make your way through this week, let yourself be caught up in this most wonderful of all stories. Hear the words as if it was the first time. There is always more to discover on this holy journey. Let yourself be transformed by the passionate love of Christ. Take some moments for meditation and prayer. And consider all that our Lord has done for us. He chose the path which led to pain before joy--the cross before glory. May the cross be planted in our hearts, so that in its power and love we may come at last to the glory of resurrected life!
Posted by Dorcas (aka SingingOwl) at 7:08 AM

I think that the Pharisees are an easy target to point fingers at. They are the Other, not us. They are like the cartoon caricature of the Bad Guys. But we all are the same way.

Somewhere this week I read that when there is a dramatic reading of the Palm Sunday Gospel lesson, the Congregation should be saying the part of the crowd and the Pharisees, because we are them and we were there.