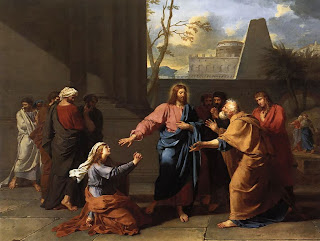 Jesus left that place and went to the vicinity of Tyre. He entered a house and did not want anyone to know it; yet he could not keep his presence secret. In fact, as soon as she heard about him, a woman whose little daughter was possessed by an evil spirit came and fell at his feet. The woman was a Greek, born in Syrian Phoenicia. She begged Jesus to drive the demon out of her daughter. "First let the children eat all they want," he told her, "for it is not right to take the children's bread and toss it to dogs."

"Yes, Lord," she replied, "but even the dogs under the table eat the children's crumbs." Then he told her, "For such a reply, you may go; the demon has left your daughter." She went home and found her child lying on the bed, and the demon gone.

The Gentile (non Jewish) woman asks Jesus to save her daughter, and Jesus responds with something surprising and disturbing. Jesus seems to be playing favorites and being exclusive. “First let the children eat all they want," (or "let the children first be satisfied") he told her, "for it is not right to take the children's bread and toss it to dogs."

The Gentile "dogs" he refers to are the very ones Jesus has just (in a sense) included (see 7:1-23) by declaring that all foods are clean. Why is Jesus now apparently upholding the intolerance he has just criticized?

There are two primary explanations. One says that Jesus was reflecting his own understanding that his ministry on earth was directed primarily toward Israel. Although "dogs" is jarring to us, it would have matched the manner in which Jews of the period thought of the uncleanliness of their Gentile neighbors. The woman seems to accept the differences, even while she is about to offer an argument. One writer even says that the human Jesus did not yet completely grasp all the implications of his earthly ministry, that he continued to grow in his understanding as the days passed.

Another explanation is that Jesus was using a teaching moment for disciples who still found it difficult to understand much of what he did. Finding someone who would respond in the proper way, he could show the shame of an attitude that considered Gentiles as less than valuable. In other words, Jesus expected her to rise to the occasion--and she did.

I'm not certain of the explanation, but in any case, the woman's response is the real point. She does not dispute the Jews' ideas of who could be holy and who could not. Still, she declares that although a dog may be unclean and therefore lower than even a child in the household, it still receives some notice. Jews considered dogs unclean and generally did not allow them inside. Gentiles, however, were more likely to domesticate them and keep them as pets. A dog would have access to leftovers. Even as she seems to recognize the difference between Gentiles and God chosen people the Jews, she builds a sort of bridge by suggesting that Gentiles, too, should receive God’s blessings. Jesus grants her request because of the power of her argument, recognizing her remarkable faith and tenancity.

African American Brian K. Blount, President and Professor at Union Presbyterian Seminary, has this to say. "Why is this such an important story in Mark’s Gospel? Mark wants us to holler for transformation the way that woman hollered for the transformation of her daughter’s life situation, even when all the signals say, you ought to shut up, give up and go home. If that woman could stand up to Jesus, I think Jesus was telling us we ought to be able to stand up to anybody else or anything else on this planet. You want change? Then you’re gonna have to fight for it. You’re gonna have to be relentless. You’re gonna have to raise your voice!”

Are we bold and courageous enough to "holler" for what is right and good and holy?

God, help us to be strong in the face of opposition. Give us tenacity and unshakable faith, and the courage of our convictions. May we refuse to be silent in the face of wrong, injustice, and evil. Amen
Posted by Dorcas (aka SingingOwl) at 5:52 PM