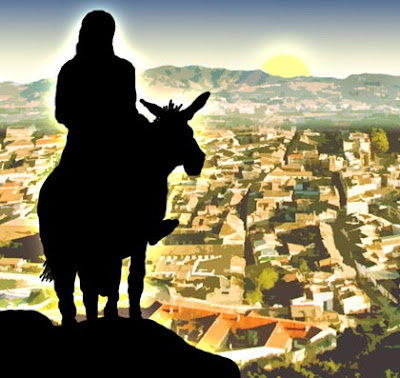 Luke 13:31-34
At that time some Pharisees came to Jesus and said to him, "Leave this place and go somewhere else. Herod wants to kill you." He replied, "Go tell that fox, 'I will drive out demons and heal people today and tomorrow, and on the third day I will reach my goal.' In any case, I must keep going today and tomorrow and the next day—for surely no prophet can die outside Jerusalem!

"O Jerusalem, Jerusalem, you who kill the prophets and stone those sent to you, how often I have longed to gather your children together, as a hen gathers her chicks under her wings, but you were not willing! Look, your house is left to you desolate. I tell you, you will not see me again until you say, 'Blessed is he who comes in the name of the Lord.'

Luke 19:41-42 "As he approached Jerusalem and saw the city, he wept over it and said, 'If you, even you, had only known on this day what would bring you peace -- but now it is hidden from your eyes."

It seems that not all of the Pharisees were of one mind about this upstart from the country. Some accounts reveal that several were secret followers and some became believers later on. For some, this whole incident must have been distressing, confusing, convicting...and others (who likely started out with hard hearts, in my opinion) became more determined to get rid of the troublemaker.

The short road from Bethany to Jerusalem crosses a ridge and dips down the western slope of the Mount of Olives. As Jesus, his disciples and the crowd reach this point, the city is spread out before them --a beautiful site to these eager pilgrims. Jesus has just ridden toward the city on a donkey in fulfillment of an ancient prophecy. The people have recognized the symbolism, as was revealed in their response, "Blessed is he who comes in the name of the Lord..." We would expect this to be a highlight of Jesus' life. I'm sure the disciples were feeling ecstatic.

Suddenly the procession stops, and those closest to Jesus are shocked to see him convulsed in sorrow. The word translated "wept" is the Greek verb klaio, "weep, cry, bewail." This is no genteel grief requiring dabbing at the eyes with a hankerchief. Jesus bursts into sobbing. He weeps for the blindness just observed in those who wanted him to tell the crowd to hush.

Here he is, the Prince of Peace (Isaiah 9:6), the King riding his royal donkey into Jerusalem, the holy city, and he is unable to bring them peace. He is not accepted as those who "proclaim peace, who bring good tidings, who proclaim salvation" to Zion (Isaiah 52:7). The only other alternative to Messiah's peace is sorrow.

Jesus describes the siege of a city."The days will come upon you when your enemies will build an embankment against you and encircle you and hem you in on every side. They will dash you to the ground, you and the children within your walls. They will not leave one stone on another, because you did not recognize the time of God's coming to you." (Luke 19:43-44)

Josephus, an eyewitness to the fall of Jerusalem in 70 AD, writes: "[General Titus] gave his soldiers leave to set the suburbs on fire...he placed... archers in the midst of the banks that were then being raised...those that threw javelins, and darts, and stones...So the trees were now cut down and the suburbs left naked....the timber was [carried] to raise the banks, and the whole army was earnestly engaged in their works. Romans were able to surround the city completely. So all hope of escaping was now cut off from the Jews...Then did the famine...devour the people by whole houses and families; the upper rooms were full of women and children that were dying by famine, and the lanes of the city were full of the dead bodies of the aged....afterwards, when they could not do that, they had them cast down from the walls into the valleys beneath."

This horrible account sounds a great deal like Jesus' grief-stricken prediction, "They will dash you to the ground, you and the children within your walls." Josephus goes on to describe the total destruction of the temple and the slaughter of more than a million people. No wonder Jesus sobbed as he saw with prophetic vision what was coming to the beloved city and its people.

We know, of course, that the destruction of the temple by Titus' army was not the end of the suffering and persecution of Jewish people. Whenever I hear stories of so-called "Christians" taunting Jews with the epithet, "Christ killer" or read of those during the time of the Nazis who decided that the Jews were just getting what was coming to them, or any of the other numerous occasions of despicable action towards Jewish people, I think of this passage. (Thankfully, genuine followers of Jesus did not do these kinds of things, but risked their lives to help their Jewish neighbors.)

Jesus was not angry or vindictive about what was about to happen. He did not say they were getting what they deserved and he took no joy or smug satisfaction in what he saw as he looked at the future. His heart was broken.

Do our hearts break for the sorrow of others?

God of Jews, Gentiles, men and women, red, yellow, brown, black and white, young and old, rich and poor, strong and weak, forgive us for our misguided attempts to assign blame. May we, like Jesus, feel sorrow for those you love. Grant us courage, strength, and boldness to do what is right without being self-righteous about it! Amen

Posted by Dorcas (aka SingingOwl) at 5:51 AM