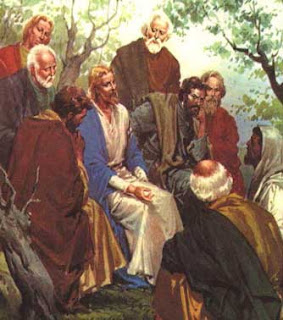 Mark 10:32-45
32 They were on the road, going up to Jerusalem, and Jesus was walking ahead of them; they were amazed, and those who followed were afraid. He took the twelve aside again and began to tell them what was to happen to him, saying, "See, we are going up to Jerusalem, and the Son of Man will be handed over to the chief priests and the scribes, and they will condemn him to death; then they will hand him over to the Gentiles; they will mock him, and spit upon him, and flog him, and kill him; and after three days he will rise again."

35 James and John, the sons of Zebedee, came forward to him and said to him, "Teacher, we want you to do for us whatever we ask of you." And he said to them, "What is it you want me to do for you?" And they said to him, "Grant us to sit, one at your right hand and one at your left, in your glory." But Jesus said to them, "You do not know what you are asking. Are you able to drink the cup that I drink, or be baptized with the baptism that I am baptized with?" They replied, "We are able." Then Jesus said to them, "The cup that I drink you will drink; and with the baptism with which I am baptized, you will be baptized; 40but to sit at my right hand or at my left is not mine to grant, but it is for those for whom it has been prepared."

41When the ten heard this, they began to be angry with James and John. So Jesus called them and said to them, "You know that among the Gentiles those whom they recognize as their rulers lord it over them, and their great ones are tyrants over them. But it is not so among you; but whoever wishes to become great among you must be your servant, 44and whoever wishes to be first among you must be slave of all. For the Son of Man came not to be served but to serve, and to give his life a ransom for many."

This passage is the epitome of chutzpah. In both Yiddish and English this word is sometimes used in a positive sense (rather like 'spunk") but the original meaning from Hebrew is used indignantly to describe someone who has over-stepped the boundaries of accepted behavior with no shame.

These two brothers, James and John, step over the line not once, but twice. First they say, "Teacher, we want you to do whatever we ask of you." And then they proceed to ask for positions of power and authority in God's Kingdom.

Almost everyone has has times of wondering if words are evaporating like soap bubbles in the air before they reach anyone. Or what preacher does not know the frustration of feeling passionate about the need to communicate something important and pouring heart and soul into a message-- only to notice someone yawning, or clipping their fingernails, or texting.
Mark's gospel records three similar occasions when Jesus spoke of his death and must have felt like He was preaching to stones or to brick walls.
The first time was not long after Peter confessed to Him, "You are the Christ" When Jesus began to speak of how he would "endure many things" (Mark 8:31) it did not sit well with His congregation. Peter took Jesus aside to rebuke him. (That encounter didn't turn out so well for Brother Pete!) The next time, no one rebuked him, but that was because "they did not understand what he was saying, and were afraid to ask Him" (Mark 9:32).

Today's reading is the third time of bringing up the subject. Jesus began to tell them what was about to happen to Him in Jerusalem, saying that he would be delivered over to the chief priests and scribes, condemned to death, delivered to the Romans, mocked, spit on, beaten, killed--and would rise again!" (Shouldn't that, if nothing else, have provoked a reaction?)

On the first occasion, his listeners reacted negatively, but at least they reacted. In the second instance, they wanted to say something but didn't because of confusion or fear. The third time they acted like they hadn't heard a word.
James and John, the two with chutzpa, were thinking how they could better their position. They were unmoved by Jesus' words. Apparently they thought they deserved title and rank. The other disciples weren't much better. "When the ten heard it, they were indignant." They were interested in getting their own share of the Kingdom pie.

Jesus was speaking about holiness and the coming of the kingdom and the accomplishment of the will of God when he talked about his death. And it was as if the disciples were saying, "Enough about the cross thing, Jesus! Don't you care about us? We need to maintain a certain level of honor and reputation and comfort, no matter what happens in the future."

If the closest disciples of our Lord were capable of such negligence and such hard hearts, so are we. Their preoccupation with their own position and their desire for recognition and comfort are uncomfortably familiar. All too often I read the scripture only to follow it up with a prayer that is mostly a list of my own needs and wants. Or I am preoccupied with my own happiness, my own fulfillment, my own satisfaction, my own little view of the world.
Yet, even as the Word sometimes reveals our worst, it shows us the best of God.
He began to tell them what was to happen to him. Jesus preached the heart of forgiveness and salvation. Did they deserve it? What do you think? Yet, God does not repay us as we deserve. Instead he offers us mercy, forgiveness, love and grace.
Do not take the words lightly and go on as usual. As St. Paul said in another place, "He who did not spare His own Son but gave Him up for us all, how will He not also with Him graciously give us all things?" (Romans 8:32)
Thanks be to you, O Lord our God, for your unspeakable gift! Forgive us our selfish ambition and foolish jealousy and pride. May we be willing to become a servant of all--and we know that is impossible without your enabling power and grace. Help us to hear the words you speak to us, and to see the things you show us. Amen
Posted by Dorcas (aka SingingOwl) at 7:33 PM