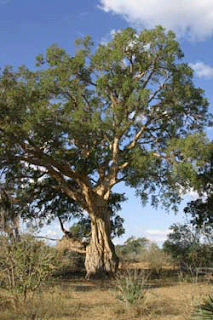 Then he told this parable: ‘A man had a fig tree planted in his vineyard; and he came looking for fruit on it and found none. So he said to the gardener, “See here! For three years I have come looking for fruit on this fig tree, and still I find none. Cut it down! Why should it be wasting the soil?” He replied, “Sir, let it alone for one more year, until I dig round it and put manure on it. If it bears fruit next year, well and good; but if not, you can cut it down.”

This passage touches on one of those BIG QUESTIONS. The problem of suffering, or: "Why does God allow terrible things to happen to innocent people?"

The Old Testament contains many passages (the Prophets) that warn that if people did not turn from wickedness that judgement would come. The Psalmist too tells us that while wicked people may flourish for a time, the day of reckoning eventually arrives. Jesus says this too--"Stop trying to figure out if someone else is sinning and look to your own selves, because if you do not, God will not look the other way. " So sometimes bad things happen as a consequence of our actions. (I experienced that one just yesterday when a man with flashy lights on top of his car stopped me, and I did not like it one bit.)

Then there is that tricky book of Job, where along with some New Testament passages, we learn that sometimes there may be a reason behind bad things that happen, and that sometimes these testings and trials can be a learning opportunity or work something good in us. (And sometimes not. Bad things don't always make me "bitter or better." Sometimes they just make me tired. Careful of those cliches that can hurt people.)

But these questioners were not so much asking with genuine sorrow or perplexity. It seems that, once again, some were hoping to trap Jesus, to trip him up with a trick question--especially one with political overtones. If Jesus was not sufficiently scornful of the hated Romans, maybe the Jews would stop listening to him. Or if he did criticize Pilate, even better, because they could tattle on him.

This passage is one of the reasons we'd best be careful when attempting to assign reason to disasters (as happened in Haiti and Chili most recently). Perhaps there is some cause and effect, perhaps God's judgement does play a part...but Jesus is having none of it. He gets to the heart of the matter. It is not whether good or bad things happen. What really matters is how we choose to live, to respond, to be. The poor people who were victims of Pilate's horrible act, or those who were the hapless victims of a bad accident are not really what Jesus' questioners should have been concerned with.

Then the unsettling parable. It was long past the day when the owner should have been enjoying some of his wife's homemade fig newtons and his patience is gone. And yet, the servant shows "mercy" to the tree--just a little more time, a little more care, a little more tenderness. We tend to focus on the lack of fruit in this story. God is the owner and Jesus is the gardener.

But what if we are the impatient owner? Read it again with that thought in mind.

II Pet. 3:9:
"The Lord is not slow about his promise, as some think of slowness, but is patient with you, not wanting any to perish, but all to come to repentance."

If justice is what we really want, we would all be finished. Mercy is what we need. One more year. Finally, however, we have the goal of the wait--fruitfulness.

By reframing the original question, Jesus brings us to the heart of God--a God who will judge, but one who is persuaded to grant a little more time. It is not our responsibility to figure it all out. It falls to us to live our lives humbly before our Creator and to show love and care. God, and only God, will decide when, or if, judgement will come. Don't presume on the kindness; embrace the mercy; wonder about the justice, but we must not bad things be an excuse for failing to change our own hearts and embrace the surprising mercy of God.

About your statement "... And sometimes not. Bad things don't always make me "bitter or better." Sometimes they just make me tired. Careful of those cliches that can hurt people."

I disagree: every situation - whether pleasant or not - has the potential to be used for my good when I am focused on Christ. Romans 8 leaves no room for doubt on that. Even when all I seem to be getting is tired, somewhere in there, good is being done. Tired surely describes what I am feeling right now, yet in that state, I am learning to love and serve my wife (even when I feel too tired); I am learning to give when I don't think I can give any more. It only happens as I am focused on Christ - when I start noticing too much how tired I am, I know my eyes are off of Him and on myself, instead. Like Peter on the waves, that is when I start sinking.

If I get too focused on just what "good" I expect, however, then I am putting my wisdom above God's - and that arrogance will surely lead to disappointment. That is when the truth is reduced to a failed cliche.

Love to you and family,
Grady