To start at the beginning, click on the link at the bottom of this post, "Ken's Ordeal."

Among other doctors, we visited an allergy specialist, wondering if perhaps Ken's continued illness could be due to some sort of food or other intolerance.  This doctor didn't have any real answers, but he did suggest Ken try out a gluten-free diet.  We have both been gluten free for well over a month.  No change.

He also said, "You really need to get to Mayo."  But he gave us a "doctor to doctor" phone number and specific instructions of how to proceed.  We followed his advice, got a referral from Ken's new primary-care physician, and got an appointment for June 27th.

We already are incurring some significant medical bills.  Our insurance does not extend out of state; Mayo Clinic is in Rochester, MN.  We made inquiries to our insurance company with no success--and then it dawned on us both that Ken is rated 100% disabled by the Veterans Administration and so has the VA "gold card."  We don't usually access the VA system, since Ken has insurance through the Dept. of Corrections, but after numerous phone calls to the VA, we finally were given the go-ahead for Mayo.  The Veterans Administration would pay the bill.

Then Ken developed cellulitis in his leg.  That is a story in itself, and I won't take time to share it.  However, this is a severe infection that has twice landed him in the hospital; the last time was for over a month.  We were told he would require at least a month of antibiotics and would not be able to travel.  However, things cleared up much more quickly than expected, and the infection specialist told us the trip would be all right.

We awaited the journey, feeling hopeful but also afraid to be too excited.  We had been happy to get the referral to the Marshfield Clinic and that visit had been a deeply depressing disaster.  The Mayo Clinic, however, is generally acknowledged to be one of the best in the world.  Their history is fascinating, their research is wide-ranging and impressive, and their staff is numerous. Since people come from all over, the doctors there have a wider range of experience than elsewhere.  Mayo Clinic, Saint Mary's Hospital and Rochester Methodist Hospital form the largest integrated medical center in the world, providing comprehensive diagnosis and treatment for about 350,000 patients each year.

We drove to Minneapolis and spent some time with our son, Joshua, and his family.  It was fun to see our little grandson, Noah, and to catch up with Josh and Stephanie and to spend some time with Keith, Ken's brother.  Ken had purchased a bubble-blowing lawnmower toy for Noah, and it was a big hit.  We tried not to think about the trip to Mayo.

But the day arrived, for the two-hour trip to Rochester.  The weather was beautiful with temps in the mid-seventies.  The countryside was beautiful too, with rolling, lush green landscapes.

We were grateful not to have to spend money on a motel.  It is expensive to stay in Rochester (a beautiful little city) despite "Mayo Clinic rates."  Ken has a friend who lives in Rochester and he and his wife were away for the week and graciously allowed us the use of their home.
﻿﻿
We were a bit overwhelmed with the enormity of the Mayo Campus.  When we passed the Welcome to Mayo sign, I got teary-eyed.  I don't know if it was relief, hope, fear or all three.

Flowers are everywhere.  So is artwork.  There is sometimes music. The entire campus is beautiful and there is an atmosphere that is full of hope.  It is different than any other medical facility I have entered--almost a sense of being somewhere sacred.  Nearly everyone we encountered, from doctors to technicians to nurses to janitors and volunteers, were smiling and helpful.  I expect their training in personal relations must be pretty extensive, since people come from around the nation and the world--and often are very ill or very mystified about what is wrong with them.  All of the doctors took their time and listened carefully.﻿
﻿﻿﻿

There were about a dozen building in all.  Some are for education, research, and more.  There is a building for primary care physicians who serve the Rochester community.  The Gonda Building and the Mayo Clinic Building are connected and are where most out-of-town patients are seen.  The Mayo Clinic is really many individual "clinics" (at least one or more for each of the various specialties).  This tiny picture of the connected two buildings that I found on their website gives you an idea.  Each building is larger than most hospitals.   The two hospitals, both large as well, are not in the picture.  This is just the clinics. 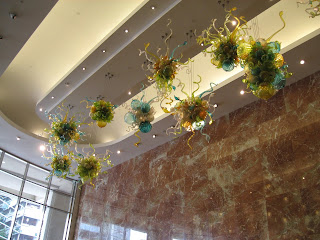 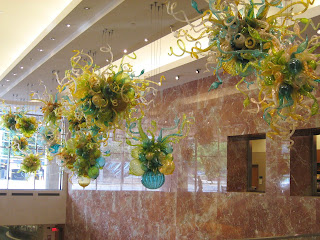 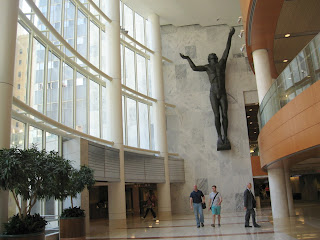 Artwork from the great glass-blower genius, Dale Chihuly, lines the ceiling of the main entry to the Gonda Building.  I couldn't help looking at it every single time we passed beneath it. The atrium, part of the connecting hallways between the Gonda and Mayo building,  is full of music each day at lunch time.  The sculpture on the wall is called "Man and Freedom" but it made me think of prayer.
One day, waiting for Ken to finish up some lab tests, I sat in the atrium for nearly two hours.  There is a beautiful grand piano there.  A middle-aged Asian man sat down at the piano, smiled, and began to play what seemed like a soundtrack of my life.  He played hymns and a few contemporary worship songs, theme music from Disney classics, Broadway tunes, and some classic rock arranged for piano, just for good measure.  An elderly lady seated in an chair near me hummed along, and soon I was humming along too.  We chatted, and I learned she was from Indiana, and she had been at Mayo for three days.  When Ken returned, I thanked the piano player and he nodded and smiled and kept playing.  His musicianship was extraordinary, and here he was spending time playing at Mayo.  I wondered about what he did for a living.  I hope he gets paid, somewhere, for making such beautiful music.

Another day when we passed through from the Gonda to the Mayo building, someone dressed in surgical scrubs was playing, "There's Just Something About That Name."  I hadn't heard that worship chorus it in years, and the beautiful melody washed over me like a sweet breath of Heaven.
The days were long.  After our initial meeting with a an internist, Ken had consult appointments scheduled for mid July.  Of course, we (along with most others) came a long way and didn't want to go home and come back later.  Getting into each of the clinics for a consultation can be a bit like waiting for a "stand-by" seat on a plane.   Doctor visits are longer than the industry standard.  They take their time and they are wonderful about answering questions.  Since all the individual clinics are in one location, you can often access several specialists in a matter of days instead of weeks or months.  The schedulers do their best, but they can't always get patients into each clinic.  So Mayo uses a system called "Checkers."  Checkers are people who sit in a clinic and wait, hoping that if someone doesn't show up for a scheduled appointment, they will be given that appointment time.  Every day, each clinic has many such checkers.  We were among them, and we expected answers.
Some, like a woman from South America, were angry at the wait.  Her daughter approached the counter in the neurology clinic and loudly demanded that her mother be seen immediately, asking, "Do you know how much it cost her to get here?"  I felt bad for the South American lady, and bad for the staff at the counter, who each day are confronted with a room full of people waiting for appointments and often an equal number of people hoping someone doesn't show up.  Most of the checkers seemed tired but philosophic about it.  Everyone is glad to be a patient at this amazing place.   Puzzles sit on tables.  Sometimes we would see someone curled up in a chair, sound asleep.
The week was boring, fascinating, interesting, hopeful and depressing by turns.  It was an emotional and physical roller coaster.  For Ken it was often extremely painful.  Ken was seen by an internist, two neurologists, a rheumatologist, and an endocrinologist.  He had many lab tests and several MRIs.  We don't have all the results yet, but those we do have are normal.   The rheumatologist disagreed with the one we'd seen in WI who was guessing Ken has Rheumatoid Arthritis.  Lab results indicate no inflammation, and steroids had no effect.
And no, we do not have a diagnosis.  What is causing his pain, weakness, weight loss, muscle atrophy, hormone depletion and more? All five doctors who saw Ken know he is very ill, and each one is mystified as to what can be wrong.  We are returning mid July for a visit to the orthopedic department, the one requested consult that didn't take place.
We are trying not to think beyond that.
Posted by Dorcas (aka SingingOwl) at 5:19 PM

Continued prayer for this mysterious and oh-so-challenging reality of your lives.

Prayers continue as your journey through the unknown. Hugs