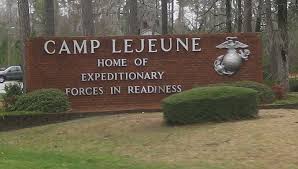 I forgot to mention something in the last installment (# 6) that might be significant to someone.

The day before we left for Minnesota, I was sitting in the waiting room at my doctor's office and picked up an American Legion magazine.

The cover pictured a little girl who looked strikingly like our daughter, Kristina, at the same age. Opening the cover, I felt a little jolt of surprise.  The title article was the same as this post, "Camp Lejeune's Toxic Legacy." Ken was stationed at the Marine Corp's Camp Lejeune, near Jacksonville, North Carolina, for three years in the mid-seventies.  Our family, at that time consisting of Ken, me, and our baby daughter, lived at Tarawa Terrace, an enlisted housing neighborhood in Jacksonville, about three miles from the base.

I was appalled by what I read, and I grew increasingly angry.  From the mid '50s till the mid '80s,  Marines and their families were unknowingly subjected to alarming levels of toxins, reportedly the highest known levels ever found in the entire nation.

Click Camp Lejeune's Toxic Legacy to see the article for yourself.

Other links of interest are The Few, The Proud, the Forgotten and Camp Lejeune's Marines Put in Cancer's Harmful Way

An internet search will lead to several disturbing accounts of the water contamination, the slow response of Lejeune's leadership, the lackluster warnings, and the continued efforts to establish links to many mysterious diseases.  The little girl pictured in American Legion Magazine died of leukemia.  Cancer is the most obvious of the diseases that have been suffered by Marines, former Marines, and their family members in alarming numbers.  However, there are many more.  To say I am disgusted does not even begin to describe my emotions upon reading this article and doing some subsequent research.

Will we find some definitive link between Ken's pheochromocytoma, or the other issues he is now struggling with?  Likely not.  But perhaps this information can be of use, or can help answer someone's long-held questions.

We will always wonder.
Posted by Dorcas (aka SingingOwl) at 5:58 PM

Praying for resolution of this for Ken and you!

sorry to hear about all this. I'll be praying for you and Ken.