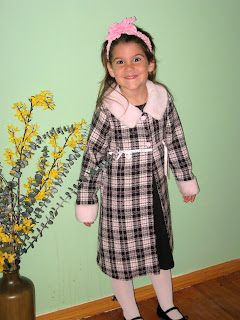 I am hosting the Rev Gal Blog Pals Friday Five today, but first I have a little story to tell.

Earlier this spring, my husband won three tickets to a concert presented by the symphony orchestra of a nearby city--featuring Mozart's Requiem.  We debated for a few days about taking Trinity, our four-year old granddaughter, to such an adult event.  In the end we decided to give it a try.  After all, the tickets were free, so we didn't have a great deal to lose if we had to leave.  (There she is in the picture, all dressed up and ready to go hear, "my Mozart!")  You may wonder why we would consider taking a preschooler to the symphony, but this child loves Mozart and listens to a CD nearly every night at bedtime. Once I tried to sneak a CD of Bach in, and she cried, saying, "Grandma, that is NOT Mozart."

She was hopping with excitement, but we gave her lots of coaching, and when we arrived she gazed about with wonder at the lovely venue, and when the orchestra began to tune up she sat up straight and gazed, enraptured, with her mouth literally open. It was pure delight to watch her enjoying brand-new sights, sounds and surroundings.

This experience led me to remembering times of discovery, of new experiences.  Some were my own experiences and some were remembered from my children, or those of others. For today's Friday Five we are sharing five memorable moments of insight, discovery, awareness--from childhood or later, something you experienced or something you shared with someone else.

1.  Once, on a summer trip through Arizona at night, my father stopped the car. (This was in the days before air conditioning in cars was common, and traveling at night, though hot, was better than doing it in daylight.)  I was about five, and wondered what was going on as my sisters and I, following directions, spread out a blanket, turned on our backs and gazed heavenward.  What we saw was never to be forgotten.  The scope of the night sky took our breath away.  We were city kids, and while we had seen stars, of course, we had never seen anything like the spectacle that was visible in the clear desert air.  As a matter of fact, I have never seen anything like it since.  It was beautiful but also almost frightening.  We were...so small.

2.  Once when I was about eight, I was telling my father, with great glee, about a friend's cousin.  "She's getting married," I related, "and Susan gets to be in the wedding."  My father made polite noises as I went on, "The bride is going to have a baby.  She's wearing a navy blue outfit."  My father's face changed as he said, "Oh, that is a shame."  "What?" I asked.  "What is a shame?  What's wrong with having a baby?"  He didn't answer, but I had a sudden realization that this having-a-baby thing had something to do with other things we didn't mention, like certain body parts.  I knew I'd get nowhere asking him, so I went on a journey of discovery at the local library.  I was a good reader.

3.  I once walked past a fire station with a friend.  We were about 15 or so.  Several firemen were sitting out front, and the sound of wolf whistles followed us down the block.  I was totally shocked.  It was a moment of realization that I wasn't a kid anymore, that I was growing up.  It was exciting--and very unsettling.  It was as if, in a moment, the entire world shifted. Scary! Thinking of this now, I am sad that the innocence of my teenage years would now be pretty much unheard of.

4.  The moment I first heard Handel's "Hallelujah Chorus" was like a visit to heaven itself.  It was Christmas Eve and we were having a candlelight service (the only one I remember from my Southern Baptist childhood--we didn't usually have church on Christmas Eve).  I was transported--and I think it may have been my first real awareness of the greatness of God--King of Kings and Lord of Lords!  It was awesome.  A much overused word these days, but this truly was!

5.  My grandmother died when I was three.  I had traveled to Texas with my mother.  Grandmother was in the hospital, and because she was dying they broke the usual rule against children visiting (lots has changed since the 1950s) and allowed me in.  I was lifted up to sit on the high hospital bed so my grandmother could see me.  She whispered something I do not recall.  I suddenly knew in an unexplainable way, that people do not live on this earth forever and ever.