The good Dr. Platypus made me do it. Sorta. So without further delay, for your reading...um...enjoyment and your spiritual edification, I present this little verse in honor of the life of Church Father, St. Augustine of Hippo. 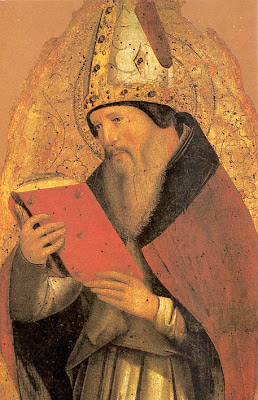 In Honor of St Augustine

St. Augustine of Hippo,
Was quite a fan of Cicero.
He loved his Latin, not his Greek,
But sure did love the ladies.
Oh!

Monica was his mother,
She followed Jesus, no other.
Her son was smart but had no heart,
And pagan ways did beckon,
Oh!

He sought to learn philosophy,
And find a way to be quite free,
The Manicheans sounded right,
The told him “Sin! Why fight?”
Oh!

Augustine went off to Rome,
He taught and wrote and felt at home.
But soon his mistress had a son,
And life turned hard and sad.
Oh!

This man who was quite smart,
Sustained a broken heart.
His mistress gone, but life went on,
Good Bishop Ambrose came.
Oh!

This Ambrose was a reasoned man,
So Augustine did listen.
Could Christians be both smart and good?
Such questions then did come.
Oh!

A garden walk, God’s own sweet voice,
The scriptures showed he had a choice.
“Pick up and read” the voice did say,
He cried as he read Romans.
Oh!

He struggled with his thoughts and lusts,
He found it hard it hard to rest and trust.
A man of many gifts, he was
A man who loved his Lord.
Oh!

Augustine was made a priest,
The Word of God became a feast.
He preached and wrote of grace, and,
A bishop then became.
Oh!

His life proceeded,
God he heeded,
He wrote and preached,
Till dead.
Oh!

To read a brief biography of St. Augustine in a more serious vein, see this post at Aardvark Alley.
Posted by Dorcas (aka SingingOwl) at 11:00 PM 7 comments:

My church youth group has a drag car. Our long-suffering youth leader, John (in the black shirt), worked hard along with help from several youth and men and especially his buddy, Ray (in the red shirt), to get this car up and running. Ray's wife, Pat, a.k.a. Much2Ponder, painted the lettering, and more is to come. A race track not too far away features "Beat the Heat" nights when teens can race against the police (in some souped-up cop cars). Great idea, eh? Wanna see? The grumpy looking white haired lady in the stands is me, and Ken has the bottle of water. Thank you, Darren, for the video.

The Liberating Power of the Gospel 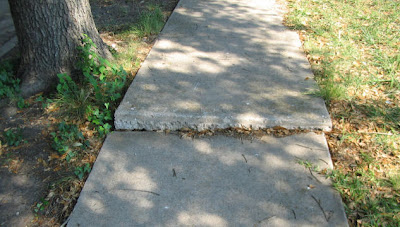 A commenter to my post below drew attention to this quote (thanks, CQ!):

The gospel is like tree roots growing underneath the sidewalk. Sooner or later, the liberating power of the gospel–for Gentiles, slaves, and women–breaks through the repressive concrete of cultural mores and norms that discriminate and oppress. Dr. George O. Wood
Posted by Dorcas (aka SingingOwl) at 9:28 PM 3 comments:

Because I've Been Gone a Lot and Not Posting

What Color Is Your Brain?
Posted by Dorcas (aka SingingOwl) at 8:18 PM 10 comments:

Labels: Quizzes and Memes and All About ME

Assemblies of God bloggers have been talking for weeks about the state of our church, the national gathering in Indy, the aging of our clergy, emergent versus traditional church, and so on. A number of younger ministers feel disenfranchised, and not without reason. This was sadly clear during the business sessions.

For now I will say that my heart was heavy at many moments during our General Council, but all in all I am rejoicing. One reason is that Dr. George O. Wood was elected our new General Superintendent. I am thrilled about this. He is not young, and many felt we needed a younger leader, but he is articulate, an excellent expositor of the word, and a man of great humility and kindness as well as intelligence. He is a strong proponent of including women in all levels of church leadership. Here is an article he wrote from a Pentecostal perspective, about women ministers. How refreshing!

I vividly recall his words at a national AG conference for women in ministry in 2001. He stood at the podium and wept, as he said (my paraphrase) "I apologize to you, on behalf of the Assemblies of God, for how we have ignored or negated the callings of a generation of women. I am grieved, and I am sorry."

NO ONE in our top leadership had ever said anything like that! I sensed a great shifting. It was almost physical it was so clear, and I came home and told my daughter, "I was part of something major. I don't know what, but something changed on a deep level during that conference." As another AG blogger commented, "The AG is a big ship, and shifts in direction do not happen quickly." Sigh...but they do come.

I believe Dr. Wood, perhaps most of all the executives, understands the direction of society and the changes that must come in order to more effectively reach a new generation. He has served for some time as the Executive General Secretary, so he is not new to "headquarters," but I believe we did have the direction of God's Holy Spirit in the elections.

Besides, he greatly reminds me of my dad, only with humility! ;-) More later.
Posted by Dorcas (aka SingingOwl) at 12:16 PM 3 comments: 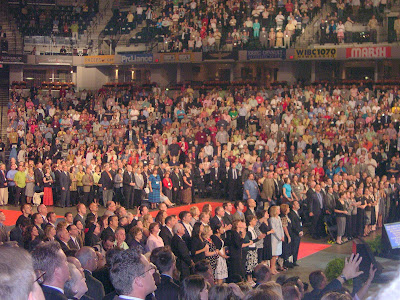 The picture is of some of the crowd at the Assemblies of God national council. Most of the people on the floor of the stadium are newly-commissioned missionaries. There were about 8,000 of us at Conseco Field House, and another 12,000 young people (YAY!) at the RCA dome.

It was an interesting time. The music and the preaching were great. There was humility and grace, not a few tears--and some very straightforward messages about what must change. During the business sessions I found myself angry, frustrated, deeply disappointed, hopeful and rejoicing, all in a matter of a few hours! Is it any wonder I'm tired? ;-)

In a historic move, we have elected out first African American to one of the executive offices (there are six). The Rev. Zollie Smith, New Jersey, was elected to serve as the Executive Director of National [the USA] Missions. It is already evident that he and his wife, Phyllis, will bring new viewpoints and "flavor" to headquarters. As the election results were announced, I rejoice to report that the Smith's received a long, loud, and enthusiastic standing ovation.

Are you are wondering why in the world this is so important, or why it is only happening now? In our formative days at the beginning of the 1900s, the white portion of the newly-forming church primarily became the Assemblies of God and the black portion primarily became The Church of God in Christ. In addition to the racial makeup of the two church bodies, one was largely rural and the other was largely urban. We had "people of color" among our AG clergy ranks, but they were few. The Hispanic churches within the Assemblies of God are experiencing significant growth, and in recent years specific steps were taken to broaden leadership to specifically include minorities.

After nearly 100 years, the divide that occurred seems to be closing. Thanks be to God!

DP, Ken and I did eat at Agios...mmmmm mmmmmm! Thanks for the tip! QP, I saw Mark, but only at a distance so never actually spoke with him. He was nominated for national office, but he declined, saying he believes he is to stay at Southeastern University.

I have more to share, but first I need rest and time to ponder. It is good to sleep in my own bed. I think I'll head there now...gotta preach in the morning.
Posted by Dorcas (aka SingingOwl) at 11:12 PM 6 comments: 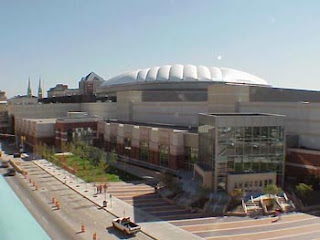 Later today we will be heading for Indianapolis, Indiana where Assemblies of God clergy and church representatives will gather at the Convention Center and RCA dome. There will be music, messages, and times of prayer as well as business meetings. Hopefully we will also see some old friends. We don't always attend these--actually it has been several years since we have.

As I mentioned in a previous post, our general superintendent, Thomas Trask, is retiring mid-term. I have heard that the "number 2 man" is also retiring. There are hints of significant changes in the works, and I expect the business meetings will be revealing. May the Holy Spirit be with us and may God's will for us be done!

We'll be home Saturday night just in time to sleep a bit before church on Sunday. I don't know if I will be blogging from Indy. I don't have a laptop, but perhaps I can get some computer time somewhere. I'll let you know how things went when I return. Meanwhile, read the post and comments below and maybe share your thoughts. I'll share mine later if I have any thoughts left in my head after four days of mingeling. :-)
Posted by Dorcas (aka SingingOwl) at 11:10 AM 5 comments:

In an article titled "The Martyrs No One Cares About" Michelle Malkin says:

"The blood of innocent Christian missionaries spills on Afghan sands. The world watches and yawns. The United Nations offers nothing more than a formal expression of "concern." Where is the global uproar over the human rights abuses unfolding before our eyes?"

Read her thoughts here. Are we indeed considered "other?"
Posted by Dorcas (aka SingingOwl) at 11:20 PM 3 comments: