Could it be Alien Body Switching? 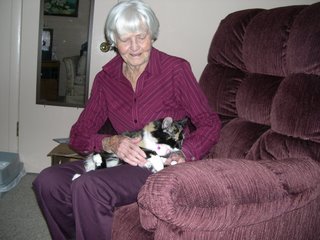 Here is my cute 89 year old mother with her new cat, Patches, a Christmas present from my husband.

My mother lives with us. She is basically a fundamentalist who loves TBN. She NEVER watches t.v. (except TBN and ice skating). She rarely listens to music other than hymns. She never reads a book that does not have a religious theme of some sort. She thinks all movies are questionable unless they are produced by Disney.

The other night I flipped on Public Television, sitting sleepily on the couch and waiting for my husband to come home and tell me to go to bed. Instead of anything "high brow" I found myself watching the reunion concert of Cream. Ah, those guys weren't as well known as the Beatles or the Beach Boys, but the sound of their music can sure transport a Baby Boomer right back to 1966 or so. If you go to the link and click on sound samples and listen a little, you will see what I mean.

I was never a Cream fan exactly, back in the day, but I listened to the guys, admiring their talent (especially Eric Clapton--wow!), considered how tired drumming like that for two hours would make one, pondered the fact that they all looked wrinkly and--well--old.

My mother came in and sat down silently. I waited for a comment like, "What awful noise. How can you listen to that?" Instead, after a few moments of watching the t.v. with a quizzical look on her face, she said, "What kind of music is that?" I replied, "Rock. Well, rock with blues and jazz overtones...but rock. Yes." "Rock? Really? Hmmm" my mother said.

A few minutes passed. I was on the couch kind of bobbing my head and thinking of riding to the beach in my sister's little red convertable on a sunny California day about 40 years ago, many pounds lighter, sans wrinkles or grey hair, full of anticipation for life. In the back seat were our bags with swimsuits, towels, coconut smelling suntan cream, a radio, and two meatball sandwiches. And I cranked up the radio to listen to Cream cranking out "Sunshine of Your Love." Amazing what music can do for my memory!

Meanwhile, my mother was over in the recliner, silent and still, alternately gazing at me and the television.

She eventually got up, and as she headed for her room she quietly said, "They're pretty good."

My mother said the same thing about the Grateful Dead! LOL "They're pretty good -- they're not like those loud, screaming bands. I just wish they'd stop repeating the same thing over and over."

I also found out she likes BB King...she was enjoying my BB King/Eric Clapton collaboration, "Riding With the King." Who knew?;-)

I'm getting this image of your mom back in 1937 swinging to the beat of Lionel Hampton, Artie Shaw, and Peggy Lee.

Ha! Dancing? Are you KIDDING? NO NO NO...she went dancing once. One time with my dad (before they were married) and she felt so guilty she confessed the crime and swore never to do it again.

I had to do some serious pleading to be allowed to buy the album "Meet the Beatles." Serious pleading. And I know she questioned the wisdom of that for weeks.

I'll have to blog about the concert.

I'm surprised you didn't have a heart attack....
My dad was a hippy type WAY before there were hippies. He wore his hair in a long pony tail way before Willie Nelson. He would embarrass me by playing rock music at full volume and play the drums along with the record.

It was YEARS before I could listen to rock music....

I got ditched by my date at a high school dance because I requested the Kingston Tri. She spent the rest of the night in another guys arms because I was 'too weird'. All in all, I'd have been better off with you and your sister and the meatball sandwiches. mmm, now I'm hungry.

er, that was supposed to be Kingston Trio, and if the food reference didn't give me away, it's Nightmare

Rev Mommy, that is funny! The opposite of my mom...and look what happened to both of us! LOL!

And Nightmare, your food reference did give you away. :-) My sister (it was the one who now has Alzheimers and I've blogged about it) and I used to listen to the Kingston Trio all the time. I know every one of their songs.

I was a big fol fan in the sixties.

As for those meat ball sandwiches, there was a little "hole in the wall" place not far from my sister's house. They had meatball sandwiches that I've never tasted the like of since. Wonderful crusty bread, hugh meatball and the most delicious sauce. We'd stop there and pick up lunch and then head down Malibu Canyon to the beach. You could smell the salt way before you could see the ocean. One day we sat on the beach eating our sandwiches and not far away were a couple of cute guys. My sis and I started joking about the looks they were sending our direction. (She is 10 years older than me, but she always looked younger than her age because she is very petite.) My sister said, "They are really admiring our meatball sandwiches."

We remembered that moment for years. I still do. She doesn't.

It's so sad. She is my favorite person in the world, and I will hopefully go see her in May. Probably the last visit where she will still be able to sort of talk to me.

Wow, sorry to end on a sad note.