Chaplain's Conference Part One: The Home of the Throwed Rolls

It is almost midnight, but since I'm not sleeping I decided to blog. I wonder if it is like counting sheep? I'll start with the silly stuff and move on the the serious stuff.

What IS that unbelievable racket?
Thursday morning we left much later than planned, due to some complications at home. Thus, we arrived in Springfield quite late, missing the "Meet and Greet." Oh phooey. (Not really. I was relieved, not being a fan of gatherings where I must mingle with strangers.)

We parked the van and stepped out into oppressive heat and humidity. Trees flanked the hotel entrance; the lobby glowed with warm colors and attractive lighting, and I could see glimpses of striking artwork. As I stepped onto the brick patio in front of the doors, I heard the sounds of classical music piped over a speaker. Waiting with our luggage, I stretched my back and thought, 'This is a very nice place. That sounds like..." Suddenly zzzzzzZZZZZZZZZaaaaAAAAA--a thousand cicadas simultaneously erupted in sound! I jumped in surprise. Chopin's "Nocturne" was completely drowned out by the insistent, LOUD buzzing. "Well, I'm back in the South!" I thought. "Wisconsin sure doesn't sound like this."
Contrasts
Some other observations on Yankee versus Southern:

WI towns are neat and clean. MO towns are less so.

MO yards have trees and grass. WI yards do too, but most also have flowers. I noted that very few people had flower beds or hanging baskets or pots of flowers. In Wisconsin, many home and every business or church or civic building has flowers at the entrance or on the porch. The police station has flowers. I suppose this is because we only see them for 3 or 4 months a year. We get tired of white and grey, and we want color while we can get it!

Our area of Wisconsin has lots of technical colleges. Springfield has so many institutions of higher learning (including the University of MO and the Assemblies of God Theological Seminary) that I lost count. Perhaps all the colleges are the reason for the strip club? Sigh.

A Visit to Lambert's

A not-to-be missed experience when visiting Springfield is a trip to Lambert's, "The Home of the Throwed Rolls." We arrived at noon on Saturday and waited and waited and waited some more. It's worth it, and the people-watching helps the time go by. In the first two minutes I saw two really sorry t-shirts. I guess sometimes MO women wear t-shirts too. One had two large jug pictures placed strategically on the front of the shirt. Whatever. The next was on a senior citizen, and my first glimpse was from a distance, causing my mouth to drop. Then I took a second look and realized it was a shirt, not the real thing. The shirt pictured a voluptuous female body, front view and back view depending on which way the wearer stood. The body was scantily clad in a crocheted thong bikini. Argh. I later saw two other large family members wearing slightly different versions of this charming shirt. DH looked, looked at me and rolled his eyes, whispering, "now that's attractive." They had several little girls with them.

Women, do not work at perpetuating stereotypes and making us look foolish!

We were entertained by the children, parents, teens and old people. It was fun listening to accents too, some southern, but not all. It is a big tourist place. 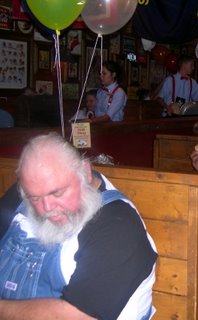 I cheated. I pretended to be taking Ken's picture, but really I wanted to capture this "Ozark" guy! He looked down just at the wrong moment, but you get the idea. Outside, he had been wearing a large, broad-brimmed hat, and he looked like a photograph from a book!

Inside Lambert's the walls are covered with a collection of license plates, and the place is a wonderland of antiques, old photos and interesting junk. The servers are good, the atmosphere is noisy and fun, and the dance-party music plays non stop. I decided the subliminal message was, "Come in, have fun, eat fast, move out." My feet tapped the entire meal to the mix of oldies, pops and r and b.

The food is so southern as to be stereotypical. It is wonderful. Well, it tastes wonderful. I hate to think of what it was doing inside our arteries. The menu includes lots of entrees and so many "side orders" I couldn't choose for a while. Then there are the "pass arounds" which the servers bring in tin buckets, calling out the selections as they make the rounds of the wooden booths. Choices include all-you-can-hold of fried okra (yum), fried potatoes, fried cinnamon apples, pinto beans, macaroni and tomatoes, gravy, sorghum (who eats that?) and the famous "throwed rolls." These come out of the kitchen piping hot. They are large, yeasty, soft--and the servers will not hand you one. They throw them to you. No exceptions. 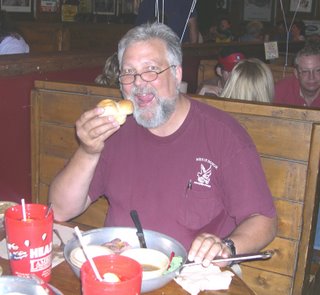 Note the meals served in skillets, and the enormous glasses of iced tea. Ken is about to bite into one of the famous throwed rolls. (Why does he look like he only has one tooth?) Our friendly waitress informed us that in seven years at Lambert's she had only served 32 desserts. No kidding!

There was one BIG problem at Lamberts. What do you suppose was on the table to spread on the rolls? Margarine! That is just wrong. I mean, it's not like we are trying to avoid calories, what with the the fried everything and the size of the servings! Country Crock on those rolls should be against the law. Next time I may bring my own butter! 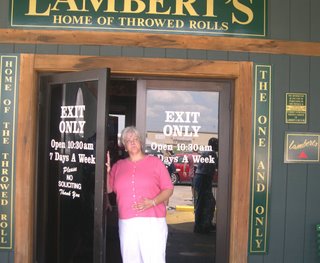 I'm at the exit, and I'm full. It is bad to go to this place too often, I've been told. I don't doubt it! I have lost about 10 lbs in recent weeks, and I probably gained half of it back.

A paragraph is missing somehow or other. Gotta fix it.

Now how did you know that was one of my favorite places to eat? :D

My aunt lives just south of there, and I visit her often. Did you buy one of the huge thermal mugs to take your tea home? And did you stop by the Bass Pro Shop while you were in Springfield? It's one of the "must see" places, dontchaknow! :) Lack of flowers is mostly due to the heat, I think. It's been VERY hot this past month there. I hope they treated you well.

I thought about buying a mug and would have done so except I have smallish cupboards. Ya sure, gotta stop at Bass Pro everytime we are there. :-) We also always stop at the Walmut Bowl store in Lebanon. I love the place. It's been really hot here too. Hot everywhere, I think. Springfield people are very friendly. But what happened to the numerous Chinese restaurants? There were still a number, but most are gone. I always thought that was a strange feature of Springfield!

I was relaying some of this to my friend (a pw) from Alabama and she loves the sorghum!
All of this is new to me but maybe one day we'll visit the States again and make sure we go to Lamberts - just for the eating experience.

No dessert though. Oh, no way.

Singing Owl, I can't believe you got to eat throwed rolls before me and I LIVE in the darn state! I haven't been down to the southern end of Missouri in forever - but that's probably a good thing. I'd more than likely have gained your entire 10 lbs back instead of just half.

Oh, and for the record, MO people are huge fans of diet coke, also. :-)

This made me laugh! You have captured WI spot on!

(Except not all of us wear only jeans, t-shirts and tennis shoes!)

The comparisons made me laugh. We visited friends in MO once. There seemed to be an independent church on every hill. I have problems with people making up their own church, but I suppose God can use anybody.

There definetly is more beer drinking openly in Wisconsin than in MN. I just got back from Wis. We walked one block down the street to a festival for a beer and brat. Yum. The German Lutheran (and maybe German Catholic) influence is very evident. Beer is just a normal part of life; that is how I grew up and I never saw a drunk back then. But beer was always in the refrigerator and offered to a guest. But I am always surprised at how many bars there are in the rural areas, seems like there is one around every second turn in the road.

When I encountered Lutherans of Scandanavian background, I noticed more of an emphasis on beer and booze being forbidden. Or at least, you weren't so open about it.

Where I live in Northern MN, there are plenty of drinkers, but there are also plenty of people influenced by the very active Baptist church in our area, ie abstainers, or, at least, people who want others to think that they are abstainers. I've been offered a beer or drink in a home about 3 times in about 25 years. Most of the resorts don't have either a bar or restaurant.

Making me homesick for Springfield and I actually still live here.

The catfish is great too... and the chicken fried chicken... and the okra...

We ask for the porkchops on a plate instead of in the pan.

Order the salad some time. You could take it to a potluck it's so huge.

Next time try Andy's Frozen Custard too. It's a must.

I followed a link into your blog today and I had to laugh because I ate at Lamberts last Friday for the first time in a year. I live in Republic, MO. I was born in Eau Claire, WI and grew up in Vikings territory from age 3 (thank God!). Your comparisons are interesting. I find both areas to be in religious bondage, but I also am confident that God is moving and drawing people unto Himself both here and there. One of the nice things about no longer being a member of an AG system or being enrolled in an AG school is being able to have a beer or glass of wine without violating some legalistic code. Enjoy the journey!