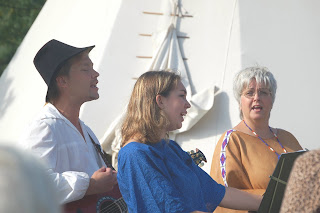 Psalm 69:29-31 I am in pain and distress; may your salvation, O God, protect me. I will praise God's name in song and glorify him with thanksgiving.
Many moments of my life, when I recall them in memory, are accompanied by music. It's like a sort of soundtrack to SingingOwl's Life Story. For example, when I think of my sisters as they were in my childhood, I see them in the poodle skirts so popular in the 50s, hear the swishing of their multiple crinoline petticoats, and then I see them in the living room of our old house, trying to learn to do "the bop" adequately so that when they sneaked out to the high school dance (we were Southern Baptists and dancing was a sin, doncha' know?) they would not disgrace themselves. I never hear the song "Tequila" without a smile, picturing the two of them. Once the late Richie Valens (think La Bamba) asked my sister to dance.
As a very nearsighted, confused and often frightened child, I would curl up on our scratchy couch while I listened to some classical recording. Moonlight Sonata and Claire de Lune are two I recall. In my imagination I was flying away on the back of a big bird, soaring above the city, the houses, the noise, the uncertainty, to bask in sunlight and reach out to the clouds.
I remember the first time I heard The 1812 Overture. I was in 7th grade and our teacher decided to try a few music appreciation sessions. I was enthralled and went right home and begged my dad to take me to something called The Cal Store to buy the album. I still have that scratchy record.
My childhood church memories are usually accompanied by a mental soundtrack which includes, songs like Leaning On the Everlasting Arms, When We All Get to Heaven, and Take the Name of Jesus With You. School memories are accompanied by late 50s early or 60s songs like "Yakity Yak" or "Que Sera Sera" or "Leader of the Pack." High school memories are accompanied by the Beach Boys, the Beatles, Steppenwolf, Cream or Iron Butterfly. Rhapsody in Blue or songs from Porgy and Bess play in certain memories of my sister, Darlaine. Or sometimes it's Mahalia Jackson. And on it goes. Church memories from the 70s have a background recording of gospel songs like, He Touched Me or I'll Fly Away or I Saw the Light. (We were in the south at the time.) Later it was He is Lord. These days it might be Blessed Be the Name.
What does this have to do with God's goodness? A great deal. I am recalling the comfort, the fun, the energy, and the spiritual solace or joy that have come to me over the years through God's gift of music. Sometimes a song comes easily. Other times it is a choice to sing through sadness.
What a blessing this gift is, and how different, and more difficult, life would be without a song!
Posted by Dorcas (aka SingingOwl) at 10:16 PM

Been trying to catch up on your posts that I have missed for quite some time now. Didn't realize I'd gotten that far behind but I had. Loved your comments about the political scene these days and lies and slander being spread via the e-mails. How true! People who would profess to be honest and trustworthy and yet, they send garbage like that via the e-mails.
And your post here about the music -really strikes a big chord with me. So many rock'n'roll songs that take me back in time to good memories of a much, much younger me! But some hymns really bring me "home" you could say I suppose. My all time favorite is an old Swedish hymn -"Children of the Heavenly Father" which was also my grandfather's favorite, is much loved within my Mom's entire family (Swedes, ya know), as well as our church, which was founded by Swedish immigrants, of course! Then there is another Swedish Christmas song - "Lyssna, Lyssna" (Listen, listen, hear the angels song) which our choir sings, sans accompaniment at the start of our midnight Christmas Eve service. (I know both those songs in the Swedish too, by the way. LOL) And one that I felt at the time to be such an appropriate choice -"Just As I Am" which was sung at the funeral of a life-long friend, my neighbor's son who had taken his own life at the age of 28, for who knows what reason. That song, to me, embodies the pain of that moment 32 years ago this month for those of us who knew and loved this young man as well as the pain he must have been experiencing in his heart and mind to have done such a thing. So many other songs too bring back such memories "How Great Thou Art" always conjures up the image of an elderly man from our church who had a beautiful but very untrained tenor voice and that song was one of his all-time favorites -mine too, I might add. So many other hymns that each brings a special image, memory, meaning to my mind. Makes me ever so thankful for this thing we call music, ya know!
Oh - and hope Trinity Ann had a really great 1st birthday party -just as I'm quite sure Grandma and Grandpa have had a wonderful year rejoicing in the beauty that is a grandchild!

I am simply blessed everytime we sing together. Many good memories you and I up on that platform just a praising.

Jeni, I am way behind on blog reading as well. :-)

Just As I Am makes me recall the Billy Graham crusade I attended in Lost Angeles when I was a teenager.

And Darren, singing with you has been one of my greatest blessings these years at Jubilee. The picture is kind of funny, isn't it?

Hi! I just found you in blog sphere and enjoyed reading. Thank you for your thoughtful posts. Glad to find another pentecostal lady in ministry blogging.
Bless you.

I can't sing, but like you I can recall songs from various momen,ts of my life. Some times, when praying I find myself reciting not Bible verses but old hymns from the Catholic church I attended as a child. I guess some things stick with you :)

Not so much about singing in this comment, more about owls, specifically the beautiful Snowy ... we can usually count on seeing them hereabouts on light standards around the local airport...nice high perches overlooking lots of nice short grass full of nice plump "moles'n'voles'n'them" -- they're such great birds.

It's nice to find other women in ministry. I'm an older woman in the AG credentialing process. I just graduated from Bethany University at 57 years old! God is faithful! I feel called to pastor a church, so would love to connect with senior pastors.

Hi Jeni, I've never posted a blog before. I hope this works. Can you direct me to how I can get a CD with the Swedish Song on it, Lyssna, Lyssna. I saw your comment about the song. I have very fond memories from Christmas Eve services and hearing the choir sing that song.