My brother in law, Larry, loves his Global Positioning System (GPS).  Last year in California he made my husband, Ken, a little crazy by turning the GPS on even  when we already  knew where we were going.  Ken is one of those manly men who never stops to ask for directions.   He also has an uncanny ability to find places, and he almost never gets lost.  Almost. 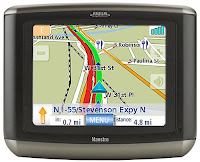 I suspect Ken considered  it was a sorry state of affairs that a fellow guy took directions from a little box.  That's even worse than stopping at a gas station and asking a real live person.  Larry was undaunted, and told us he had  named his GPS Sophelia, which sounded kind of exotic.
I instantly got a bad case of GPS envy.  Those who know me in real life know that I can get lost coming home from the grocery store.  I once did that, actually, but it should be said in my defense that we had just moved to a new apartment in a suburb of Washington D.C.  I coveted Sophelia, even though she made my man grumpy.
Our son Josh, knowing his mother's uncanny ability to get lost (and probably with a little hint from his long-suffering dad) bought me a GPS for Christmas.  I don't know why it took me so long to plug it in.  A few weeks ago we planned a short road trip.  Ah, a good time to break out the new GPS!
The GPS has a battery but also plugs in to a cigarette lighter.  In went the cord, I held the on button down--ta daaa--and Sally came to life for the first time. We named her Sally because it is much easier to say "Where is Sally?" or "What does Sally say?" than to consantly say, "the GPS."  Sally is not as exotic as Sophelia.  But "Sally says"  has a certain rythm, like Simon says.  Sally says turn right.  Sally says make a legal U turn.  Sally thinks taking the country roads is shorter.
Sally has a lovely, well-modulated voice.  It's an amazing voice, for a computer.   She also never gets rattled or frustrated or cross.  I asked my beloved what he thinks Sally looks like.  I mean, what is the face that goes with that voice?  He shook his head and he left the room without answering.

Well, Sally has a face.  It looks rather like this one.   She is very professional, attractive but not sleazy, calm, assured, unruffled.  Not like me when I am trying to find my way around unfamiliar places.  Not at all.
It is amazing that Sally knows where I am anytime I push the on button.  Also kind of frightening.  Big Brother (uh, Sister?) is up there in the sky, you know?
But Sally sounds helpful but harmless.  Reassuring.  Even when I ignore her directions and go the way I choose instead, she just calmly tells me she is recalculating my route.
Much 2 Ponder and I are known for getting lost when in the same vehicle.  She may have even a worse sense of direction than I do.  No more!  We have Sally!
ROAD TRIP!
Remember Psalm 32:8?  "I will instruct you and teach you in the way you should go; I will guide you with My eye."
You know what I think?  I think Sally might be a tool of the Holy Spirit in my life!
;-).
Posted by Dorcas (aka SingingOwl) at 4:58 PM

Hmm. I have a daughter who's going to be a minister someday who would need one of those; and I think another RGBP once mentioned it as a useful accessory for a pastor. Me, I like maps. But then I don't drive, so I can safely be the navigator.

OK, that's a bit of a stretch, "a tool of the Holy Spirit"? And I must set the record straight...I am not worse off with directions than Pastor Dorcas, I simply play along:)

And I DO NOT believe a word of it.

I will admit...I do get lost quite frequently when I am with you, but usually I am the one driving while you are navigating. Ha ha! I'm glad you have your new little toy, but I am not sure I like "SALLY" because I have always said, there is no other person I would like to be lost with other than you. It just prolongs our time together and I am always fine with that! Maybe "Sally will need to take a little nap the next time we take a trip together. LOL :) SOON I HOPE!

I guess I've played GPS for my son and didn't even know it. When he first moved to Mpls., he called me once and said, "I'm on Washington Ave. Where do I turn?" He didn't tell me where he was going, which way, or what the cross roads were. Another time he called, while driving on the freeway and asked me how to get to Bloomington. I said, "If you are north of it, go south. If you are south of it, go north." I'm a very helpful mother. (cough) I've tried to encourage him to get a map and look before he drives, but he thinks calling on the cell phone is easier.
BTW, all my kids are employed as of last week!

sounds mighty useful...I actually kind of like the reference to the Holy Spirit.

LOL at PS, and glad all the kids are employed! YAY! Diane, I think every preacher lady should have one.

And M2P, Sally is only useful if it is important that you get where you are going in a timely manner. Like our trip to the conference in Minnesota. :-) If we just wanna meander, we can turn her off, or we can put her on "mute" (poor woman) till we want her direction.

Which GPS family is Sally from? I'm want to get one to give me heads up on traffic conditions and reroutes now that I drive halfway across California every day. (note: hyperbole is intentional...:)

Magellan. Since mine was a present, I got what I got, but Larry tried several. He liked Magellan the best. They are available at Radio Shack, for one place. Sally will reroute if her directions are ignored, but there is also a detour feature so that if you know ahead of time that the Golden State Freeway is closed, you can ask that it not be in the route. :-)

My brother got one when he first moved into our area and it was an enormous help to him. I think I would like one, but I have lived in this area for so long and used the map that I am not sure it would be used much -- except when I travel out of state or into NYC. Then it would be mighty helpful.

I am delighted you are enjoying "Sally."

I too get lost easily. Before moving from RI to PA, Ray got me a GPS, Garmin. That's all we call her. And she's gotten us around all kinds of places. I will be using her to get to my teaching parish this Sun. (we get our matches and meet with mentors today!). Sometimes when we go our own way, it's like we can hear Garmin's frustration as it seems she must sigh before once again saying, "Recalculating."

But I miss those calls from you saying "I think I am here. How do I get to where I am going?"

Was that you, Ken? Snort!