Heirs Together: Part One -- Last Sunday 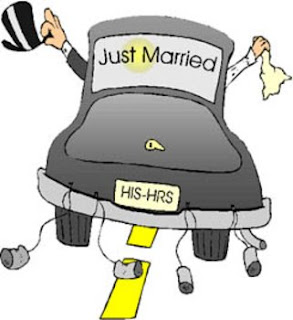 This really isn't what I intended for Part One.  I was unable to resurrect last Sunday's sermon, but it was really just introductory. We began with a little quiz. I didn't actually require anyone to answer, just to think answers to themselves. Only one person knew they were all false. And she did have a bit of an advantage. She's my secretary and gets to hear me rant about stuff all the time. :-) Then we took a quick look at "A Very Bad Sermon on Marriage." Then I shared some good quotes on Christian marriage, and some alarming stats (basically, marriages in the church are not doing any better than those outside the church--and some indicators would say we are doing worse). Something is wrong. What is it?

Here is the quiz.

1. Marriage is like the Trinity, where the Father is in charge of the Son, and the Son obeys.

5. The biggest mistake Adam made, and husbands make today, is that he was not willing to lead.

6. The Bible instructs women to submit and husbands to lead.

7. The husband should consider the wife’s opinions, but he has final say.

8. The man will be held responsible for the actions of his wife and children.

9. If the husband is a servant leader and the wife graciously follows, God will insure that all will turn out right.

10. If we do not follow the divine plan of husband as leader and wife as follower, our marriage will be unstable.

11. Someone always has to lead in a relationship.

12. Eve’s biggest mistake was in making a decision without consulting Adam.

14. God made men to lead and designed women to follow.

Scripture? Oh yes, we had some. I used some of the scripture about discernment that I posted a while back, applied them to being discerning about what we are "told" about marriage, asked everyone to do their best to lay aside previous notions and just explore the scripture with "new" eyes for the duration of the series.

And we will base the series on I Peter 3:7

In the same way, you husbands must give honor to your wives. Treat your wife with understanding as you live together. She may be weaker than you are, but she is your equal partner in God’s gift of new life. Treat her as you should so your prayers will not be hindered.
New Living Translation

Husbands, likewise, dwell with them with understanding, giving honor to the wife, as to the weaker vessel, and as being heirs together of the grace of life, that your prayers may not be hindered.
New King James Version

Next week, among other things, we will consider that "weaker vessel" phrase and what to make of it. (It is pretty simple, really. The problem starts when people read all kinds of thing into it other than the obvious meaning.)

Back to the quiz. Every question was taken from a sermon, a popular book, or a statement I heard on Christian radio just in one month's time.
Every answer is false.
I got some odd reactions to that, I can tell you! But I expect there were some conversations over the dinner table. And that is, mostly, a good thing.
Posted by Dorcas (aka SingingOwl) at 8:59 AM

I've been out of town, so I'm catching up. I'm wondering about #1. That doesn't seem to me like the traditional way the Trinity is explained, ie co-equal parts of the one God. Is that correct? Thanks.

The Trinity is explained that way to justify the Man as the boss in the family.

It isn't the traditional way, but it is lifted right out of the "very bad sermon on marriage" which was posted earlier, and it is the positon of the COuncil on Biblical Manhood and Womanhood. And it is increasingly being preached and written about. Look at paragraph one in the very bad sermon I posted a few posts down. And I agree with Kris, that the Trinity is being explained that way to justify man and boss. (Marriage and the relationships in the godhead are seen as related. I say hogwash.)

The quiz is GREAT. I love your gentleness in exploring what are often embedded and taken-for-granted 'truths' in certain Christian circles. They were in the 70s at least when i was an impressionable young person. I thought the ideas had been left behind long ago and a little sad that they are persisting and mutating into even more virulent forms. That Trinity stuff is SOOOOO scary. Well done in your sensitive AND direct challenge.

Thanks EmJayDee. You are a person I wish I could sit down and chat with in person. :-)
In the comment above, I meant to say "to justify man AS boss"--just in case I confused anyone.

Did you read "Fascinating Womanhood? Or "Total Woman" or "The Fulfilled Woman?"

Yikes...I loaned TFW to several people. How could I have been so dumb? Ah, too soon old too late smart, as they say/

Interesting quiz...I'm not surprised that you got a few odd reactions :)

I love your quiz. I seem to remember some of those statements from long ago...

Brilliant - thank you - great to see you cite 1 Peter and really helps me to overcome the negativity I've attached to Timothy and Titus because of complementarian teaching that I've come across. Wow - negativity and God's word - I feel ashamed but this is how I've felt.
Love Rachel at Re vis.e Re form

Hi Singing Owl,
Would you be ok with me copying your list of statements and posting them on my blog? I'd like to see what others answer before letting them know they are all false!

This is just wonderful Singingowl, too many people swallow too much nonsense and it harms relationships in an alarming way!

Hi SingingOwl. Stumbled onto your questions. I made up a survey like this as well which I think is helpful. Only five questions in mine. No one in my group got the question all correct either.

The questions are here: http://awv.tenoutoften.org/component/k2/item/33-submission-of-wives-to-husbands-questions.html

The answer link is on the bottom of that post.

Hi agrogers...took at look at your quiz. Ah, if only husbands were always godly and loving, as is Christ. I once knew a couple where the wife, in strict obedience to her husband in "everything" as your simple quiz states, prostituted herself. She was convinced God would not allow it to happen since she was obeying those instruction to the "letter." Could it be that the letter kills but the spirit gives life? The spirit of the passage is love. But you already know I'm not a fan of Wayne Grudem's views, so onward and upward.

Yea, it would be nice to live in a perfect world, that's for sure. One day we will. Ironically there is no marriage then so this command becomes somewhat irrelevant :)

But i dont think we should allow that to undermine the commands of scripture. God well knew men would be bad. Yet, still He inspired Paul to write 'wives submit to your husbands in the same way as the church submits to Christ'. I am sure He said that for out benefit.

Personally I think that wives get the easier option. They might have to submit to their unloving husband but the Christian husband must die for his unloving wife :)

Teaching one without the other would be bad exegesis.

How often is a wife called to submit? Every day, I would think, in some way or another. How often does a husband have to die for his wife? I guess that depends, but not often where we live. Good thing I think submission is for both halves of the pair! Many a husband might say he's willing to die for his wife. If so, that is a good thing. But is the same husband willing to take out the garbage? ;-) I do not have any wish whatsoever to undermine the commands of scripture. But it is important to understand them and not to enforce them while ignoring other passages that shed light on them. That's just plain old fashioned exegesis.

Yea, i think 'dying' means the little everyday dying that husbands like me often do badly and the big once off dying. So, yes, a wife may have to submit daily but the Christian husband should be dying daily to serve his wife. I think that could be a winning combination.

But back to your questions. The pattern the Lord lays down for wifely submission is pretty clear - a wife submits to her husband in the same way as the church submits to Jesus. That is a very practical and helpful clarification of what Biblical submission is supposed to look like.

If we use that as our guide, i get the following answers to some of your questions:

4. The Bible never tells husbands to submit.
=> Yes, Jesus is never told to submit to the church

6. The Bible instructs women to submit and husbands to lead.
=> Yes, the church is to follow Jesus

7. The husband should consider the wife’s opinions, but he has final say.
=> Yes, Jesus always has the final say

9. If the husband is a servant leader and the wife graciously follows, God will insure that all will turn out right.
=> Yes, although following Christ might kill us or make us poor or see our children die on a mission field.

10. If we do not follow the divine plan of husband as leader and wife as follower, our marriage will be unstable.
=> Yes, Jesus is the leader and when the church usurps that role we have problems.

11. Someone always has to lead in a relationship.
=> Yes, in the Jesus/Church relationship Jesus always leads.

14. God made men to lead and designed women to follow.
=> Yes, Jesus is the leader of the church.

Would you agree with that method of determing what Biblical submission looks like? If it doesnt look like that, what does the parallel described in Ep 5.24 actually mean?

I suspect we could continue this for many, many, many posts. The short and simple answer is that husbands are NOT parallel to Jesus in every way. To extrapolate such broad directions for couples is dangerous. Jesus is my savior, redeemer, baptizer, kind, God...and my husband is none of those things.

P.S. As for # 13, point taken. I did mention that in the sermon, actually. But the statement I heard in a radio sermon was that the divorce rate for Christians is much lower than for non-Christians. For whatever reason, it is just not the case. Sadly. Also want to say I appreciate your reference to "small dying." I agree. God bless.