My Aunt Pauline--the End of an Era 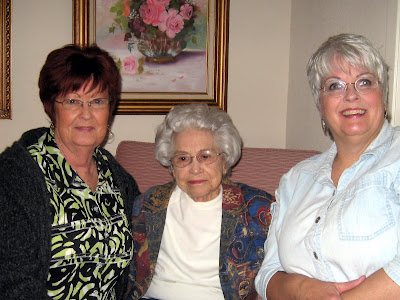 Precious in the sight of the LORD is the death of those faithful to him. Proverbs 116:15

My mother's sister, my Aunt Pauline, has gone to be with God.

The picture above is my sister, Paulette, our Aunt Pauline, and me. It was taken in January when Paulette and I were in Texas and on our way to our mother's funeral. Dear Pauline was sad she could not make the trip, but she was glad we had managed to spend a little time with her. Like my mother, Pauline was one of those wonderful "steel magnolias" that the south is known for, women who are gracious, charming, always ladylike--and strong. I've written on this blog about my mother's Texas family and how influential they were in our lives. They seemed like a Norman Rockwell illustration to us, and now the last one is gone.

My grandfather once travelled on a wagon train. He had a scar on his wrist that he told us grand kids was the reminder of a wound from an Indian arrow. (I was disappointed to later learn that it had actually been caused by a childhood fall into an empty cistern.) During the depression my mother and her siblings picked cotton in the fields during the summer, along with "Papa" and Mexican laborers. Papa, was an astute farmer, however. Over the years he increased his land holdings and eventually became a man of some means. He and my grandmother were the parents of eight children, two boys and six girls. Both boys went off to war in Europe and both came home safe again to "the family."

How we loved our Texas relatives! We were the California contingent, my dad having relocated to work at Lockheed Aircraft during World War II. The family was close-knit, supportive, loving, God-fearing folks. If one was in the hospital or in some sort of trouble, the others were there. The women raised smart children (seriously!), kept clean homes and cooked wonderful meals. Except for my mother, they lived in Texas all their lives. Five of them remained in the same small town.

Pauline loved to paint. One of her paintings hangs in my living room and another hangs in the hallway. Pauline taught Sunday School at First Baptist for decades. She was the best cook I ever knew. My mother was a wonderful cook too, as all the sisters were, but Pauline was a genius in the kitchen. Her dishes were homespun, but they were all fabulous. At about age eight, I ate so much of her tomato soup I almost made myself sick. My mother's recipe box, now mine, contains dozens of recipes that are designated, "Pauline's."

Pauline had married my dad's cousin, "Pee Wee." Pauline and Pee Wee lived on a farm, and after they grew more affluent they turned the little house into a lovely brick ranch-style home. Later, she nursed Uncle Pee Wee through blindness and then a brain tumor, sitting at his bedside for hours as he lost his sweet personality, then his senses, and then slowly died. It was agonizing for Aunt Pauline, as was the tragic and untimely death of her only son. Through it all, she kept her head high. She also kept her faith in God, her love of her family, her pride in her grandchildren, and later great-grandchildren, as well as her zest for life. Her clothes were always lovely and fashionable, her hair "coiffed" weekly at the beauty shop, and her makeup tastefully applied.

Years ago, when my mother got "strange" my Aunt Pauline was the one sibling who really believed my father's heartbreaking and shocking stories of what life with Leta had become, but she never stopped believing the best for her sister. My dad loved her for that, and he stayed friends with Pauline and Pee Wee till he died, even after my parent's strange and sad divorce.

My mother disappeared for several years, a sad and bizarre story. When my late sister, Darlaine, located her in a California "board and care" home, a frail shadow who at aged 55 looked about 95, it was her brother, C.G. who convinced her to come home to Texas. It was exactly the right thing for her to do, and she regained much of who she was, teaching the Bible, leading a prayer group, and working in a little clothing store until (at age 85) she finally retired. Her family had welcomed her home, and my mother was there as one by one her siblings grew older and passed away and only she and Pauline remained. My mother lived in Texas for about 30 years until she finally grew frail and forgetful and came to live with us. Not long afterwards, Pauline relocated to an assisted living facility in Ft. Worth near her daughter, Shirley.

The sisters' last good bye broke our hears as the two elderly women, both still lovely, embraced for what would be the last time. They wept, knowing this. I got teary-eyed too. They had grown very close in their older years, sharing prayer, dinners, shopping and trips to the doctor.

For some time Pauline has lived on "borrowed time." She pulled through things that would have finished off a weaker person, and for several years she lived, unaccountably, with only about one-third of her heart intact. She lost her eyesight too, and she was no longer able to cook or to paint. She told me it was hard to leave her hometown behind and move to Ft. Worth. but she stayed positive, calling my mother at least once a week to check on her and hear the latest from faraway Wisconsin. She knew Leta was "mentally failing" but it still hurt Pauline when she heard of my mother's stroke and subsequent move to the nursing home. No more phone calls.

Recently Pauline had grown more vague in her thinking, but for someone in her nineties she remained remarkably lucid and interested in family, politics, the news, etc. She was sad to be unable to attend my mother's funeral, and Paulette and I cried as we looked at the beautiful spray by my mother's casket that simply said, "Sister." Pauline had won the rather macabre contest as to who would survive to be the last of Papa and Mama's brood.

We have one aunt in-law remaining, but the last of my mother's remarkable family of origin is gone. To the end she remained faithful to God, concerned about her hair and makeup, fashionable, and connected to those she loved. I like to imagine that she is having a wonderful family reunion now.

But to me it feels like the end of an era. How can it possibly be that all of them are gone?

Posted by Dorcas (aka SingingOwl) at 9:56 AM

Dear Singing Owl,
So sorry to hear about your loss-again.But, OH the joy she and Leta must be sharing in heaven! I wonder if Leta might have been waiting right there as she crossed the river? Now they are both there in the arms of the Lord.
They have left you a legacy and I bet you too will be just as pretty as they were in your 90's( if the Lord doesn't come back first as your mom might have said).
I'm praying for you. Laurie

To paraphrase an old popular song, you are "a living legacy" to the generation before you, now all "gone on to glory." I'm sorry for your loss, but I also give thanks for your gracious sharing of the stories of these saints in your life.

May God hold you close as you mourn and grieve, and give you the assurance that they, and you, are wonderfully all right in the great heart of the Almighty.

Blessings to you, my sister.

I'm so sorry...the end of an era. Prayers of thanksgiving for the witness of these women in your life, and for the legacy that you continue in your own generation.

Thank you SO much for sharing this! What wonderful family history.

You need to write a family saga.

Blessings on your family and you,

Singing Owl, Aunt Pauline sounds like one heck of a gal. :-) You've been through a lot of sorrow in a fairly short period of time, and my thoughts & prayers are with you, Ken and your family. I have to smile, though, to think of the wonderful family reunion Aunt Pauline is enjoying now.

Remembering you and yours in prayer. These losses are very hard on our hearts.

You have my sympathy for your loss. At the same time, I'm thankful for the beautiful story you've shared!

What beautiful sharing, thank you. And I am sorry for this loss and all it represents.

I am so sorry. You have had so much of this lately. Praying for peace and courage.

Singing Owl, I am so sorry for your loss. Losing the last of the generation before us is always so very sad. I am now the oldest in our family - makes me feel ancient!

(By the say, in that photo, you could be my sister!)