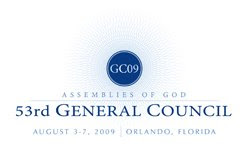 Tomorrow I pack my suitcase and Monday morning Ken and I head to Orlando, Florida for the Assemblies of God General Council. This is a national (and to some extent, an international) gathering of ministers, missionaries, and leadership. It happens every other year and is usually uplifting and encouraging. Not so much last time.

On the good end, two years ago we elected the first African American to serve as a national executive. We also elected Dr. George Wood, a man I greatly admire, to be our General Supt. Dr. Wood is "older" and some people thought that would mean he would be out of touch with the needs of our church. They could not have been more wrong. Without going into detail, I'll just say that he has a deep understanding of what must change if we are continue to grow, he is a strong advocate for women in ministry (see the link to his article in the sidebar), and he has taken steps to reach out to the younger pastors in the AG. He is my Facebook friend. Okay, I should say I am his...and he is going to Twitter from council.

Still, it was a discouraging council in several ways. The most frustrating moment came during a business session. A resolution had been submitted that would have caused slight change in the make up of our executive presbytery--I mean slight--but would have ensured we begin to practice what we preach when we say we are a fellowship that wants greater racial diversity, that knows our clergy are aging, and that prides ourselves (sometimes) on having women clergy. Had it passed, we would have had a woman, a young pastor, and a person of color sitting "at the table" with the many older, white males. (I love you guys! That is not the point.)

The discussion for and against got heated, made me furious, discouraged many people. I didn't plan on speaking, and I waited for some woman more known to come to a mic--but when none did--and after Ken poked me for the third time...well, up I went and made an impassioned "speech" in favor of the resolution. I took my seat to applause, which had to be stopped since we were in a business session. Gratifying, nonetheless! While the measure gained a sizable majority, it missed the required two-thirds vote by a small number. I was ready to go home right then.

I may not be able to post during the week, but we'll see. (I do not have a laptop.) I am certain that a similar resolution will be forthcoming this time as well. Several thousand people will be heading to Florida in the next few days (I heard an estimate of 35,000). Please pray with me that all arrive safely, that we hear what the Spirt would say to the church, and that God's will may be done on earth as it is in Heaven.
Posted by Dorcas (aka SingingOwl) at 10:59 PM

Have a great trip and meeting.

Tom Rosebrook said...
This comment has been removed by the author.
9:53 AM

Prayers for the wind of the Spirit to blow through this meeting! Having just participated in the Episcopal Church's equivalent, I know how thrilling it can be to witness God at moving and how frustrating to watch as people cling to safety and the familiar. Vaya con Dios!

I remember the last GC in Florida. I'll be praying no other family has to go through what ours did! It would be nice if the A/G would change in ways that meant I could return to my roots but I have a difficult time believing it will any time in the near future. But I'll keep praying. Say "hi" to any of my relatives you happen to meet!

Amen! And maybe job opportunities will find their way to you there as well.

Good for you! I am glad you are going. My Pastor will also be there as well as several teens who will be participating in the Fine Arts segment and several of their families from our church.

A/G has good people. Even though change happens slowly, it will eventually move. Everything of value takes time. Just keep the movement going.

Even though I am ordained through another fellowship, my home church for over 20 years is A/G. It is a blessed place to be. My ministry is interdenominational, so it was needful for me to identify with a fellowship that reflects that -- Elim does and blesses me in my placement. However, my church placement is still A/G. I will be praying for you (along with our folk) and trust for Kingdom business to be the agenda in the hearts of all.

Blessing you and praying.

Thanks, everyone. Prayers are much appreciated. Iris, I am interested in a few things I may ask you about some time in an email. As M2P just told me, I will "determine to have fun." There are always wonderful moments of realizing how God is moving thorughout the world. The AG's strength is really in many places overseas from the USA.

I will look forward to hearing from you. Just discovered that my son, Kreg, will also be at General Council. He is an associate pastor in his church -- an A/G.

Praying for a strong wind of the Spirit to overtake and overwhelm that Assembly!

I am already in agreement with you and praying daily as you say, for God's will to be done on earth. :) Have a wonderful, safe and fulfilling trip SO. Love to you.

continuing to pray for you and for your assembly, Singing Owl.