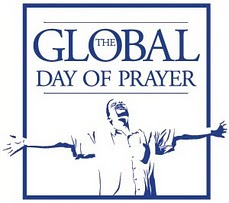 Across the globe, millions of Christians are planning to meet together in churches, stadiums, parks and homes for the sixth annual Global Day of Prayer held on Pentecost Sunday.

This prayer movement started in South Africa at the turn of the millennium when many Christians in Cape Town sensed a calling to assemble in prayer. When the invitation went out for the people across South Africa to unite in prayer for their cities and nation, people filled halls and stadiums of every size!
Year after year, millions more sought God together from almost every stream or tradition of the Christian faith in every country of the African continent.
In 2005, the African Christians invited the world to join them and the result was the first Global Day of Prayer. About 200 million people participated.
In 2006, 2007, 2008 and again in 2009, millions of Christians gathered in almost every country on earth. The movement continues to spread and deepen. We anticipate that 214 million are taking part this year.
Along with worship and other prayers, participants are asked to pray a specific prayer together. I will post it on Pentecost Sunday, so if you'd like to join me--and many more around the world--in prayer, I invite you to visit here at The Owl's Song next Sunday.
May 23, 2010, Christians from six churches in the Plymouth, Wisconsin area will join the movement for the first time by gathering at Riverview Middle School at 3 pm. We gather to pray and repent with humility, sincere hearts and united hopes. If you would like more information about that gathering or about Plymouth's 90-day involvement and how you can pray and serve, visit GLOBAL DAY OF PRAYER-Plymouth.
Posted by Dorcas (aka SingingOwl) at 8:06 PM