I am thankful for my blogging friends over at Rev Gal Blog Pals. I've met some in person, and there are a bunch more I'd LOVE to meet. They are a terriffic bunch. Rev Gal Jan hosts the Friday Five today, and she says, "With the American holiday of Thanksgiving being less than a week away, I tried to think of some questions for Friday Five that could be connected to this, but in a new way. So here is my one try:
Name five things that were unexpected in your life that you are now grateful for."

1. My husband. Very unexpected, and the greatest blessing of my entire life.

2. My second child was planned and eagerly awaited by all. (And, unexpected or not, we are thankful for him.) The first, on the other hand, was not. It makes me smile to think of it now. We had been married three months when she was conceived. Don't ask me how I know. I do know, and you don't need to. :-) About a month later I started getting REALLY sick, and when I went to find out what was wrong with me...yep. Pregnant! I was shocked. We were scraping by as it was. How were we going to afford a baby? I cried. When I shared the news we just stared at each other. It took a while, but of course we adjusted and eventually were joyfully anticipating our baby's arrival. That pregnancy was MOST unexpected, but my lovely daughter was the result. What a joy she has been!

3. Living in Wisconsin. Where is Wisconsin? When I lived in California, the state of my birth, I would have been unable to tell you, except that it was somewhere in the north and middle of the country. Like most Americans, I didn't think there was anything here but cows and beer. I've now lived here for nearly 30 years (wow!) and have learned to love many things about this part of the country.

4. An unexpected blessing...TOTALLY unexpected was being called to ministry. It is a long story why that was such a surprise, but the short version is that I grew up Southern Baptist.

5. It was never the plan that my mother come live with us. Her three daughters, of which I am the youngest, did have a plan. Our plan, for many complicated reasons, did not happen. She ended up living here for about five years. It was very difficult. My mother and I always had a rather strange relationship. I wish I could say that one day we sat down and resolved all our issues. That did not happen, but I am very glad that in the end she did spend those years with us. Yes, they took a toll on my that wasn't always good. Still, I have many wonderful memories. I miss her. I'm glad I had her close by at the end. 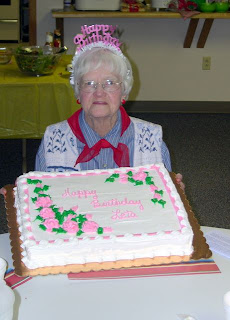 The picture was taken on her 90th birthday. She lived two more years.
Posted by Dorcas (aka SingingOwl) at 4:16 PM

Princess of Everything (and then some) said...

I totally love the pregnancy story!

So good to read. I'm glad to see your mother before she died. Thanks for sharing these unexpected and joyful events in your life!

Love this singingowl, I love #4- God really has a sense of humour doesn't he! Love the picture of your mother too.