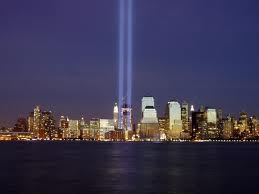 I may have been one of the last to know.

I was working in my church office, alone in the building on a quiet day. About noon I took a break from sermon preparation to go to the post office.  The car radio was on, and as I heard unbelievable words about the twin towers and planes....and...I thought I was listening to some strange kind of radio drama.  I pulled to a stop in front of the post office and paid closer attention.

Could this be real?

I don't know why I did not immediately head for home, but instead I went back to the church and turned on the radio in my office and listened, slowly beginning to understand the news that had been unfolding all day while I was unaware.

I stood at my office window and gazed eastward, towards New York and Washington, D.C. I tried to picture the scene at the Pentagon, a building I saw many times in the years we were stationed at Headquarters, Marine Corps.  The bright blue sky and sunshine seemed wrong.

I felt guilty in my little town in the midwest. Insulated and removed.

The phone rang, and the voice on the phone was a friend and fellow-clergywoman from a small Presbyterian church.  In a 2008 blog post, I wrote about what happened.  Here is a little bit of that post,

A few hours later some of the area clergy hastily put together a prayer service for the evening, and phone calls went out to invite the community. I sat with two other clergy women in a sun-drenched room at St. Peter's UCC. We had been given the task of writing a litany for the service. We sat in silence, looking at one another sadly as we listened to the tolling of the bell at the Roman Catholic Church across the street. It seemed to go on and on, each somber ring striking our spirits like a blow.  Where to begin? How could we encourage anyone when our own hearts were stricken and afraid? I remember thinking how incongruous the sunshine was. It should be cloudy and raining.  The three of us joined in prayer for a few moments, began to brainstorm a bit--and then it happened--not with bright lights or trumpets or any sort of excitement. The litany came together in a matter of minutes. The one taking notes almost could not write fast enough to get our thoughts on the paper. When we finished, three pastors--a Presbyterian, a Methodist and a Pentecostal, looked at each other in a sort of wonder. Finally, someone said, "The Spirit of God came in the room with us."

I remember wondering, as we prayed together that evening in St. Peter's beautiful sanctuary, where the terrorists would strike next.  I remember the unity, the shared sorrow, that brought liberals and conservatives together, and I can picture a photo of several congressional leaders holding hands with bowed heads.  I remember discussions with fellow clergy about what would happen to America and specifically what would happen to the American church.  Many people expected that attendance at places of worship would rise in the days, weeks and months following 9-11.

Preparations were made.  Everyone was concerned, but beneath it was a flicker of expectation that perhaps our nation would repent of our national arrogance and pride, learn some humility, and begin to acknowledge what many of our forefathers called "Divine Providence."

There was a blip of repentance, of sorrow, of prayer.  I remember vividly a prayer circle in my little church sanctuary, where several of us sang the words of a Kyrie, (not something typical for Assemblies of God people), "Lord have mercy, Christ have mercy...." and tears rolled down our cheeks.

Church attendance did rise--for a short time. There were alarms, anthrax scares here and there....but mostly our fears were unrealized.  And things went back to normal in a very short time.

But I found myself saying, many times, "Something...something undefinable has changed."  I still cannot define it or understand it or explain it, but I still believe that something fundamentally changed on this day ten years ago.  Whatever happened, I think we Americans changed as a people.

Ten years later, what do we find in the United States of America?

We find a nation that is angry.  The partisan rhetoric is vicious on both sides.  We are embroiled in not just one but two wars that seem to have no clear purpose, and no end.  Many have died.  We have lost faith in our elective process, in the government, "of the people, by the people, for the people" to an extent that I have never seen in my lifetime.  Cynicism and hopelessness seem to have the upper hand.  The econmy is stalled. Republicans and Democrats seem more interested in party politics than in solving problems.  Church attendance continues to decline.  Our educational systme is still mired in inertia as test scores continue to be alarming.  No one is exactly rejoicing at the array of possible candidates for President.  There is a sense, and this saddens me deeply, that our greatest days are behind us and that we may be on a irreversable path to oblivion.

I hope this is wrong.  I hope that we can cry out, in the words of David, Israel's greatest King,


Have mercy upon me, O God,
According to Your lovingkindness;
Create in me a clean heart, O God,
And renew a steadfast spirit within me.
Do not cast me away from Your presence,
And do not take Your Holy Spirit from me.
Restore to me the joy of Your salvation,
And uphold me by Your generous Spirit...
Deliver me from the guilt of bloodshed, O God,
The God of my salvation,
And my tongue shall sing aloud of Your righteousness.
O Lord, open my lips,
And my mouth shall show forth Your praise.
For You do not desire sacrifice, or else I would give it;
You do not delight in burnt offering.
The sacrifices of God are a broken spirit,
A broken and a contrite heart—
These, O God, You will not despise.

Whether the quote is his or not, I recommend his book, "Democracy in America.")

Did something happen to us? If so, what do you think it was/
Posted by Dorcas (aka SingingOwl) at 8:23 PM

I sit here tonight, having read your post, and I agree that something has changed within us, as a country. As a child, the area where I grew up, where I still live today, was rife with bias and prejudices based on ethnicity and religion and over the years, I was happy to watch those things disappear here. Now -so many things I read are again full of those same thoughts, those same prejudices being pushed at us but this time, it is with the Muslims as being the ones under attack. And, all the while, those who say/write these things are also professing to be patriotic Americans as well as good Christians and yet, I wonder how, in good conscience, can people say these things about a people, about a religion, of which they generally have absolutely no knowledge whatsoever other than the jokes people make about the value of virgins and that all Muslims want to kill and do away with any infidels -meaning all Christians. Time to go to square one and start all over again, I guess. One would hope that eventually people will remove the fears of others simply because they are very different or even only slightly different from what we view as our "norm." One would hope, yes -and definitely pray that day will come

My husband and I, uncharacteristically, were watching GMA live that morning together and we saw events as they unfolded. I have not wanted to see replays of the video this weekend, so I'm mostly not had TV on at all.

But the best part of your writing is about the Spirit moving among you and fellow (what is female for fellow?) clergy. At those times you know your work is not in vain.

We are headed over to see my Mom in Manti tomorrow, just for a few days. She doesn't walk anymore. Then Fri M-I-L turns 95, so we will be in Mpls. It used to amaze when people with grey hair and wrinkles had moms that were still alive, and now, here we are!

Blessings! I will think of you as we head east on Hwy 29. I miss blogging, but it seems everybody is blogging less. But I'm glad we met through blogging.