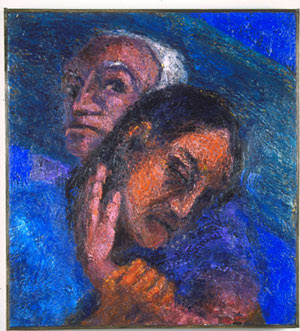 Mark 15:21 A passerby named Simon, who was from Cyrene, was coming in from the countryside just then, and the soldiers forced him to carry Jesus’ cross. (Simon was the father of Alexander and Rufus.)
Poor Simon probably felt as though he was the man in the wrong place at the wrong time. Perhaps he was reluctant, perhaps not, but the text implies that he was. But the writer of the Gospel account knows him, and knows his sons by name. It seems clear that, whatever brought Simon to that place and time, he was changed. He became a follower of Christ, and his sons must have been noteworthy in the church in some way as well, because they are named in order to help the reader identify who Simon the Cyrene was.
Sometimes the very things we shrink from in dread are the things God uses to change us forever. And the next generation too.
Oh precious Jesus, may we eagerly and joyfully accept the challenge to serve broken, suffering, struggling humanity. And may we be forever changed in the serving. Amen
Posted by Dorcas (aka SingingOwl) at 6:32 AM

I am really loving these visuals!!

Glory...yes. I wonder what thoughts and emotions were swirling inside Simon?

Something is happening in my heart this year that I have never experienced before. I don't know how to explain it, but these images of the cross--even searching for them--are doing something inside.

Reluctance and change - now that is what I meant in my other comment about "a cross to bear." Things we perhaps dread even thinking about sometimes come our way and yes, it does change us, sometimes drastically.
I lived in fear of cancer for many years -it had claimed both my parents, several other family members, close friends, etc - and yet, when I was told I too now had cancer, my life took a different turn. Not that I reformed myself totally - nothing near like that - but my base fear of the disease and its potential changed my perspective on life and living, very much and I no longer live in that shadow.

It is very true, those things I avoid because of fear of being hurt in some way are generally the very things or people the Lord wants to use to change me in some significant way. I pray for the Lord’s help in my obedience and that I would not shrink back in fear.