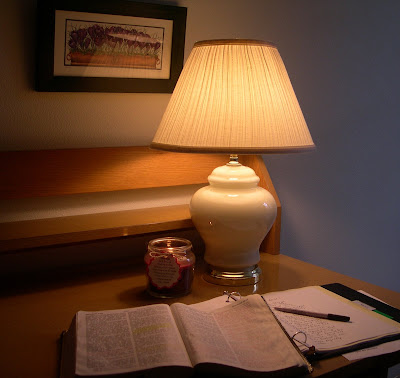 The rooms at the Norbertine Center for Spirituality are simple. They contain a small desk, a crucifix hanging on the wall, a closet, sink, and twin bed. Most of the beds are covered with colorful quilts. I brought the candle, a present from a friend, with me. 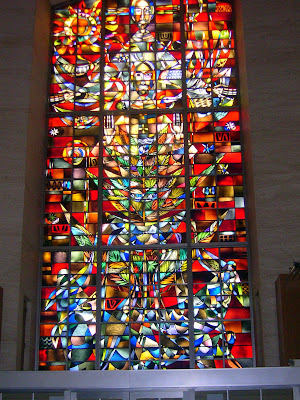 This window is in the church, of course, and is at least 14 feet high. I don't like the "modern" depictions as well as the old style, but I certainly do LOVE stained glass. I should be a Lutheran. ;-)

Interestingly (some might say oddly) the Assemblies of God district to which I belong is one of the most frequent users of the abbey's retreat center. This began nearly 20 years ago when "Pastor Pete" brought his congregation. Pete and his wife, Doris, were Roman Catholics who came to the Assemblies of God during the heyday of the "Catholic charismatic renewal." They had already been going for week-long silent retreat at Jesuit houses for many years. When Pete later was ordained an AG minister, it was a natural for him to combine the best of two widely differing traditions. They began to do retreats for the clergy of the district, then a yearly women's retreat and men's retreat. Other's did additional retreats for the churches. Now Pastor Pete is semi-retired, but he and Doris still visit the Jesuit Retreat Center in Oshkosh once a year. And we hope he continues to lead the one retreat he still does--the one for us clergy.

Sister Cala remarked (tongue in cheek--or maybe not) to my last post that she didn't know AG folks could be silent for that long! We aren't known for our silence, that is for sure. But those of us who have attended a few of these retreats make sure it goes on our calendar. Yes, Rita, the silence is to aid contemplation and--just plain ol' stillness. We also are encouraged to walk slowly and to avoid eye contact so as to be on our own "private" retreat with God. How often in our present world do we actually have silence? I consider the retreat a gift, whether or not anything profound happens to me. Sometimes it does, and sometimes not. Oh, the sheep reference is because I am a pastor a.ka. shepherd, with a flock. I also have a sheep collection, of sorts.

There is a labyrinth there which is modeled after the one at Chartres (see link) but is a "natural" one that is mowed into the grass of a large field. This is also something considered too "new agey" for most AG minister's comfort levels. But over the years, Pete tells us, there have been more profound breakthroughs occurring in the labyrinth than any other spot at the center. Last week I passed it as I walked outside and out of the corner of my eye noted one of my fellow pastors lying prone in the center. Later, as I passed by on the return walk, I noticed he was still there and momentarily wondered if I should check to see if he was all right. Just then he rose. Later, at a sharing time, he told us an incredibly moving story of a deep inner healing. Perhaps God appreciated his willingness to try something different?

Here is a prayer I found moving and helpful for this retreat. If you are questioning some things, perhaps it will bless you too.

I have no idea where I am going. I do not see the road ahead of me. I cannot know for certain where it will end. Nor do I really know myself, and the fact that I think I am following your will , does not mean that I am actually doing so.

And I know that if I do this, You will lead me by the right road, though I may seem to be lost and in the shadow of death. I will not fear, for you are ever with me and will never leave me to face my perils alone. Thomas Merton

Sometimes we don't see any of the abbey's residents, but this time two elderly Norbertines passed me in a hallway one morning. Apparently not realizing I could hear them, one said as they passed, "I see that Assembly clergy are here for a retreat." The other replied, "Yes. Isn't that surprising? But I think it is wonderful."

Posted by Dorcas (aka SingingOwl) at 6:05 PM

Perhaps they thought you spoke a language other than English and therefore, wouldn't be able to understand their words?

Well, I doubt it. I don't look the least bit foreign or ethnically like anything other that a WASP (White Anglo Saxon American Protesant). Ha! They were several feet past me, so I think it is more likely that each of them was a bit hard of hearing. :-) They were both well advanced in years.

Yes, it was with a gentle grin that I made my remarks. Half of my life was spent in the A/G and I still have a great respect for the mentors of my youth.

Though it wasn't necessarily spoken, I was taught to be wary of those of other denominations. Taught to adhere strictly to the
Bible and our tenets of Faith. But, as I aged and studied the Word for myself, I found that I could glean much from other brothers and sisters in the Lord regardless of affiliations.

I have so enjoyed these entries! There is a labyrinth mown into the grass at Guelph, where I did my 8-day in August. It quickly became a part of my morning and evening routines, a wonderful hour of prayer each time. I got a chuckle out of the idea of folks thinking of the labyrinth as New Agey.

It looks like such a lovely place, and a wonderful setting for a retreat. I'm so glad you were able to go.