Mary Visits Elizabeth: A Reflection for the Third Sunday in Advent

Many thanks to Pastor Mary of First Baptist Church of Punxsutawney, Pennsylvania for some of this material.

Now Mary arose in those days and went into the hill country with haste, to a city of Judah, and entered the house of Zacharias and greeted Elizabeth. And it happened, when Elizabeth heard the greeting of Mary, that the babe leaped in her womb; and Elizabeth was filled with the Holy Spirit. Then she spoke out with a loud voice and said, “Blessed are you among women, and blessed is the fruit of your womb! But why is this granted to me, that the mother of my Lord should come to me? For indeed, as soon as the voice of your greeting sounded in my ears, the babe leaped in my womb for joy. Blessed is she who believed, for there will be a fulfillment of those things which were told her from the Lord.”

And Mary said: “ My soul magnifies the Lord, and my spirit has rejoiced in God my Savior. For He has regarded the lowly state of His maidservant; for behold, henceforth all generations will call me blessed. For He who is mighty has done great things for me, and holy is His name. And His mercy is on those who fear Him from generation to generation. He has shown strength with His arm; He has scattered the proud in the imagination of their hearts. He has put down the mighty from their thrones, and exalted the lowly. He has filled the hungry with good things, and the rich He has sent away empty. He has helped His servant Israel, in remembrance of His mercy. As He spoke to our fathers, to Abraham and to his seed forever.” 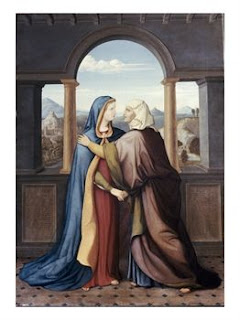 And Mary remained with her about three months, and returned to her house.

Two very different women. One was from a family of limited means, a young and inexperienced girl just embarking on her future. And--pregnant! The other was mature, brought up in a priestly family, probably of at least some means--a righteous woman. But she was unable to have a child. To a casual observer, about the only thing these two had in common was faith in God.

Most people would have assumed that Elizabeth's childlessness was a curse from God. It is likely that there was speculation about hidden sin, something "not right." Zechariah and Elizabeth must have prayed for a child. As she grew older, hope dimmed. I wonder, did Elizabeth search her heart, wondering what she had done? Did she question God? Did she cry in the night, or was she always strong? It wasn't easy, that we know. A woman's purpose was to bear children, especially male children. She must, at least sometimes, have felt flawed, useless.

Then a miracle was announced! A baby, who would be called John, was on the way! This little baby would grow to be the one who heralded the coming of Messiah. If Elizabeth and Zechariah had welcomed a child into their lives when they were young, would anyone have thought anything about it? But this was God's work, and they both knew it—and it got attention.

Having seen the miraculous power of God in her own life, it is likely that Elizabeth began to see everything through the eyes of a renewed faith and hope. When Mary came to call, Elizabeth knew what had happened to her without a word of explanation.

Who could understand or believe Mary’s fantastic story? Young Mary must have rehearsed her story many times as she journeyed to visit her relative, Elizabeth--and then she did not have to say a word! Because she had seen God’s work in her own life, Elizabeth was able to give affirmation of God’s work in Mary.

Elizabeth's miracle boy, John the Baptist, would prepare the way for Jesus. John turned out to be no ordinary guy. Elizabeth had to raise a son who could stand firm in his faith despite criticism, rejection--even prison and death. God had prepared her to be the mother who welcomed such a special son into the world.

God had also prepared her to be a blessing to Mary, the promised virgin who was to conceive and bear a son--Emmanuel--God with us! John prepared the way for Jesus, but in a very real way, Elizabeth prepared the way for his mother, Mary. She believed Mary's crazy story because she had a story of her own. All her life, God had prepared her, not only to be John’s mother, but for Mary.

Is God preparing you in your own season of questions?

May we learn from Elizabeth and Mary to look at life with the eyes of faith – expecting to see God at work--trusting divine promises more than even our own eyes. And may we, in the process, experience the joy that true faith will bring.
Posted by Dorcas (aka SingingOwl) at 12:34 PM

Prepared by difficulty to be a mentor, it seems.

Thank you for this.