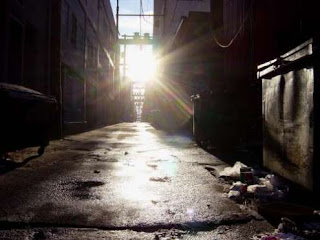 As usual, our day in prison was a highlight of Christmas. (If you missed the link a few posts below and would like to read about why I love going to prison for worship, you can read about it here.)

The gospel choir sang as inmates entered: "I came to praise the Lord, I came to stomp my feet, I came to clap my hands, I came to worship God, I came to jump and shout...." They currently have a lead guitarist, a bass guitarist, a keyboard player and a drummer that are all amazing. The little chapel was filled to capacity and they did sing, clap and shout praises. It made for a rousing worship time. I wondered if we could be heard at the units.
Earlier, I wasn't so sure it was going to be a good day. In the 2005 post to which I linked, I was relieved that things had gone smoothly at the gatehouse. Such was not the case this year. I will spare you the annoying details; the result was that Ken went to the chapel and I cooled my heels in a tiny building just outside the fence where visitors wait to be called to the gatehouse.
I use the word "cooled" loosely. The building, lined with benches, was stifling. It was crowded with people waiting to be processed through the gatehouse for a holiday visit with a loved one in the large visiting room.

Squeezing into a spot on the bench, I smiled at the people around me. A few returned the smile. Others gazed forward, blank-faced. A woman about my age smiled and attempted cheeriness as she addressed the assembly. "So, has everyone had a good Christmas so far today?" A few voices assented. I considered suggesting we sing Christmas songs, but decided against it.
Time passed. I fidgeted.
Down from me on the bench sat a young mother. Her tiny baby appeared unnaturally pale, but slept soundly in a carrier. Looking at the grey-tinged little face, I decided it would be more productive to pray than to stew over grumpy prison guards.

The majority of the visitors were women. Most of them appeared exhausted. Some appeared "hard." Several had rimmed their eyes with heavy coatings of liner and mascara. The make-up only accentuated the weariness of their expressions. A couple men waited, mostly keeping their eyes down. One middle aged couple wearing Packer shirts were about to see their son for the first time since he had been incarcerated. They looked out of place and embarrassed. They asked questions of the cheery woman.

The door opened, admitting a welcome blast of cold air and a couple with two toddlers. The little ones pranced around between the benches, smiling at everyone. This provoked a few smiles and comments. The people sitting next to me asked "Wonder how long we'll have to wait? What is your visit number?" When I said I didn't have a number but was waiting to go to chapel, they perked up and told me a little about themselves. They live about 30 miles north of me and attend a mega church. A nice young couple, they had come to see a nephew and they eagerly told me his name. He was, they said, "a new Christian." "We hope we can encourage him." I hoped so too.

Another woman with a child entered the crowded room. They wore dirty coats and smelled strongly of grease and cigarettes. The cute little boy had a shy smile and a mop of curly red hair. He coughed, a deep rattle in his chest, again and again. I pictured microbes flying through the overheated air. His mother began a conversation with a blond in tight jeans who looked about twenty and held a small girl on her lap.

I leaned my head back and closed my eyes, praying silently for the babies, the children, the sad-eyed women, the men, the woman who was trying to be jolly, the confused parents, the Christian couple...and all the others like them in hundreds of prisons, taking time on Christmas to go to a drab and depressing place. I thought of the inmates who would not be visiting anyone today, and the ones who were on a bunk trying to sleep till this miserable and lonely day was over, and the ones who could soon come to worship God with us at the chapel.

"Chapel volunteer to the gatehouse!" squawked a boxy speaker. I waved to the mega church couple and wished the others a good visit as I stepped out. The cold was a welcome relief, and I took a deep breath of the crisp, clean air.

Later, following the last Christmas service, I stood at the chapel door and shook hands and wished inmates a blessed Christmas as they exited for the walk back to their units.

One, a tall black man with a wide smile and an inner-city accent, said, "I don't care what else happens today. I am having a wonderful day!" I asked why. He replied, "Well, we had a good time in church worshippin' Jesus. And earlier today my wife and son was here. They doin' well and so I feel okay. And if I start gettin' blue I go to the happy place." He nodded his head as he continued, "Remember in the book Peter Pan they had to think happy thoughts and go to the happy place in they minds? I do that." I asked him his son's age, and I was surprised when he replied, "28." I said he looked too young to have a son that age, and he smiled as he headed out the door and down the steps. "Ms. George, that is because I go to my happy place! I told you. See, it keeps me young." Someone snorted scornfully, but it didn't seem to dampen his spirits as he headed off, singing "Joy to the World."
We drove home through snow covered farm country and watched a glorious purple sunset.
Lord Jesus, I pray not only for prisoners, but for broken, disappointed, lonely families. For women, children, babies, parents, victims, all whose lives have changed in irrevocable ways. Give us eyes to see them--really see them--ears to hear them and hearts and hands willing to bless them as you would have when you walked this earth. Thank you for groups like Prison Fellowship and the Salvation Army and victim assistance programs. Thank you for the chaplains who minister inside prison walls and for volunteers who help them. Shine a light of hope into the darkness, I pray. Amen
Posted by Dorcas (aka SingingOwl) at 12:16 PM

That takes, to my mind, a lot of courage, to go there. I know you go with somebody who is used to it, but the discomfort level for me would be really high.

I felt like not going on my recent trip, at the last minute, but then I went. Once there, I had no way to opt out of some things I didn't feel comfortable with. They turned out OK, but, well, for awhile I was singing the song with the line, "I'm going to see my Lord."

But you could have opted out at any moment and you didn't.

Grinning at your song, PS. :-)
The first time is scary. After that, not at all. I mean it when I say I love going. It is so humbling to see inmates worship with a kind of joy and freedom I see nowhere else. I do not understand it, but it really can be glorious.

I found such comfort in this but I'm not sure why. Maybe because it reminded me that Jesus is there, in prison, with all those people that lost their way? Maybe because it's good to know that even the incarcerated can have Jesus in their hearts? I don't know...but I thank you for sharing your story... and for going to the prison to spread the word of God for all of us.

God bless and have a wonderful new year!

When you said 'cooled your heels' I had visions of the worst. Never pictured you as the 'inciting a riot' type until then. ;)

Your day in prison sounds much more enjoyable than my two days in jail. I'm glad you can see so much positive in so many less than ideal situations. You're the cat's pajamas.