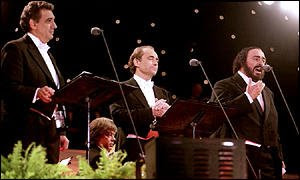 Ah...a relaxing Sunday evening. It had been a long day, and the sky grew dark as I ate some supper and then stretched out on the couch--pulling an afghan up to my chin.

Beyond the picture window a new dusting of snow sparkled on the sidewalk. It was chilly outside, but inside the warmth and the afghan were a relaxing comfort. Patches the cat curled up next to me, purring with contentment.

On television I saw Zubin Mehta begin to cue the orchestra. It is wonderful to see someone who passionately loves what they do. He seems to conduct the orchestra with a sort of exaltation.

Like everyone, I hate Public Television's pledge drives, but I have to admit that the recent offering have included an interesting selection of programming. Earlier this week I enjoyed Eric Clapton's guitar skills...now the soaring voices of Jose Carrera, Placido Domingo and Luciano Pavarotti filled the room.

I confess, I like the later section of the program the best--the one where the three famous tenors sing together and make sure to include more familiar works. I marveled at the ease with which the late Pavarotti sings--making those soaring notes seem easy. I closed my eyes, seeming to float on those glorious voices, savoring the sense of contentment...

Patches had chosen that moment to bite HARD on my toe.

Did she know it was my toe? Was she hungry? Was she mad? Confused? For crying out loud, was I bleeding?

Princess Patches sat licking her whiskers and looking aggrieved from the top of the couch, no doubt wondering why I had kicked her so hard.

Hello Owl!
Yes -- I'm an Anglican -- also occasionally subject to cat-bites! I hope you were able to enjoy your snow-day!

I saw The Three Tenors a few years ago on our PBS. I know less than nothing about opera, but that was a wonderful performance.