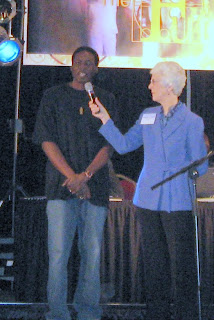 It was an interesting council. I've written before about City on a Hill (COTH). The director, Diane de la Santos, is pictured above with one of the men who has been blessed by this inner-city ministry center. He is the step dad to the little boy pictured, Trevon. They lost all they had in a house fire, except for his Royal Ranger uniform (which he is wearing) and his Bible. This young boy sang beautifully for us, and we all stood to our feet in a standing ovation. It was an amazing and moving moment. 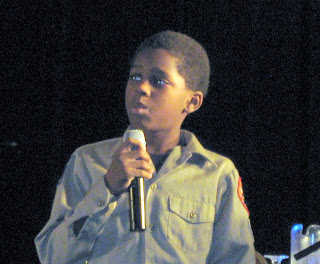 Even more amazing was what happened next. Some readers of this blog might think, based on previous posts (here and here), that I believe there is no place anymore for a "sinner's prayer." Such is not the case. Sometimes it is just what is needed.

My husband, Ken, heard the dad (whose name I'm sorry to say I forgot) say quietly to Diane at the end of speaking to us, "I think I'm ready for Jesus now." I didn't hear him, but as they exited the stage Ken headed out without a word. I didn't know why till he returned, wiping his eyes. "I just had the privilege of praying with them" he said, adding, "I asked if I had heard him correctly, and did he say he was ready now for Jesus--and he said I had heard right. And so I led him in a prayer and--I watched a visible change come over him, and his son too."

A few moments later we watched as many pastors and others came to the microphones to pledge to COTH, who has been financially struggling. A projected shortfall of almost $150,000 was erased, or will be, in minutes.

God was in the room. 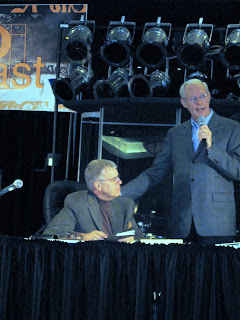 At the closing session, our outgoing superintendent, Arden Adamson, asked Larry Liebe, the superintendent-elect, to come try out "the chairman's seat." He then challenged all of us to put "character first." Symbolically he turned the leadership of our district over to Larry by handing him a relay race baton. Then Larry, who has been the director of our Youth and Christian Education department for a long time, shared his thoughts with us.

These two men could not have more different personalities, in my opinion. I love both of them.
I'll miss "Brother Adamson" and I'll watch with interest, and prayers, to see what changes come.

Posted by Dorcas (aka SingingOwl) at 8:00 AM

So glad you had a good experience at District Council. I have been to many of them and always have been blessed. My son is the District's worship director in our state, so I have two joys when I go.

Even though my local church (for 19 years) is an A/G and I am one of their adult Bible teachers, my credentials are with a smaller inter-denominational fellowship. Our "council" is called "Leadership Conference" and our main speaker this year is Jack Hayford. I think I will enjoy that too!!! The A/G Council is just outside NYC near one of the airports. I do not plan to go this year, but their main speaker is David Wilkerson, I believe. It will be worth the time for those who go.
Blessings to you,
Iris