My Beautiful Daughter is Forty Today! 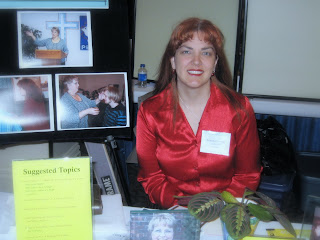 This is not the most current picture I have, but you get the idea!  :-)  I simply cannot believe the speed with which the time has passed.  Forty years ago today I was in the Naval Hospital at Camp Pendleton, about to give birth to my one and only daughter, Kristina.  For a first labor, it was relatively short, only six hours.  But it was painful, made more so because while changes in how labor and delivery are approached were sweeping the country, they had not affected the military medical establishment.  Well, I don't need to share any more about that!

When Kris arrived on "the outside," her eyes were scrunched shut and she was yelling at the top of her little lungs.  My first thought, after the relief that she seemed healthy, was that she looked like a little "papoose."  She was red.  Very red, and she had a head full of black hair. It was so long in back that it curled up.

She refused to open her eyes for the three days we spent in the hospital.  She also refused to nurse (and I resisted the nurses' constant pressure to give her formula).  She just wanted to go back inside and be left alone, I think.  She still can be like that...not a morning person.  :-)

When we arrived home she settled right down and nursed happily.  Yeah, who wants to hang out in a hospital anyhow?

Memories that stand out to me, all these years later, are her first day of school.  She was very excited, and came home a little disappointed.  She had expected to learn to read immediately, I discovered.

There was the day I came out of the church building during Vacation Bible School to see my pretty little five-year old, dressed in a ruffled yellow dress with yellow yarn bows in her hair, draped with a boa constrictor--thanks to a visiting scientist.  Yow!  (Many years later she had her own boa, which she sneaked into the college dorm.  Ugh.)

She was a born evangelist and told all her friends that God loved them.  She loved the outdoors, books, animals, music and dancing  to her grandfather's "swing" music, much to his amusement.

She was a wonderful big sister to little brother, Joshua, when he arrived six years after she did.  Of course, little brothers can be a pain, but she was usually patient and all her friends loved sweet little Josh too, so that helped.

Kris had an alarming way of getting into trouble without ever intending to, because she trusted everyone and loved life.  She frightened me many times.  Sometimes she still does.  We bought her a poster of a puppy with his head stuck in a knothole and the words "Just about everything is easier to get into than it is to get out of."  I don't think it helped.  She was always ready for  an adventure and to try something new, always trying to jump higher, run faster, see what was around the next corner.

There were sports, at which she was determined to be just as good as the boys (and she was the best player on the 6th grade football team), choir concerts, occasional plays, high school basketball, a badly damaged knee and the sadness of sitting with her in the hospital after a painful surgery.

There were difficult times in high school, and there were some unhealthy relationships that caused her dad and me a great deal of anxiety, a few very long nights, many prayers and not a few tears as she struggled to overcome some very traumatic experiences.  Even then, our Kris had a faith that, while sometimes dimmed, never left her.

She is a woman with a great big heart of love for just about everybody, a terrific photographer, a whiz on the computer, a minister with a rare gift of relating to people from all walks of life, a wife (finding a husband and life partner after she had decided to be contented being single), and a really wonderful mom.

Love you, dear Kris, and wishing you many more decades of life, love and ministry.
Posted by Dorcas (aka SingingOwl) at 7:09 AM

That sure was nice!

Princess of Everything (and then some) said...

This was so funny and beautiful!!

Thanks Mom :) It's been a mostly good life