The Presbyterian and the Pentecostal 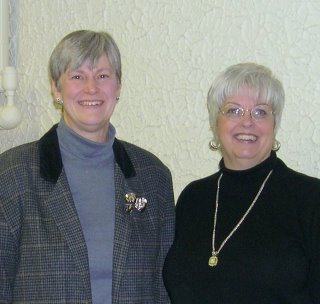 The first conversation I had with Rev. Marcia took place at the first clergy association meeting I attended in this area. Almost seven years ago, I was the new pastor in the area. Several of the regulars were missing, so I was surprised to find three other women in attendance, and no men. Since we didn't have enough people there to get anything serious accomplished, we opted to drink coffee, dunk donuts and talk about life. One of the other women was married, like me, and the other two were single. We chatted about our churches and our families. The conversation drifted to how many times people assume that single clergywomen are lesbians. "Yeah," said RM, "especially when one is a former physical education teacher like me!" Her laugh filled the room.

When she called on the phone she always said, "This is the Reverend Marcia _________." Not for a long time did she ever say, "Hi, this is Marcia." I didn't know just what to think about that.

Over the next few months and years I learned that Marcia was from a long line of Presbyterian clergy but had a powerful spiritual experience at a Christian Missionary Alliance camp, would have liked to have had a husband and family, was tender hearted, straightforward, passionate about justice issues, an animal lover, and a woman of great strength. She described herself once as an "evangelical liberal or a liberal evangelical." Like me, she is an introvert by nature, and she screws up her courage and goes for it when she has to speak publicly. Paradoxically, she has a dramatic way of speaking, gesturing, and walking that exudes confidence. I can hear her voice, measured and strong, as she says with feeling, "Welcome, people of God!" Listening to Rev. Marcia always made me smile inwardly and sit up a little straighter outwardly.

Early afternoon of the infamous 9-11 she called to say that the clergy group was assembling a hasty gathering at the nearby United Church of Christ for that evening. A short while later, she and I and another woman pastor sat in the sunshine splashing across the floor of the UCC fellowship room. Clouds and rain would have seemsed more appropriate as the three of us listened somberly to the tolling bell at the Roman Catholic Church across the street. We were there to write a litany that would be suitable for such a dreadful day. ("What do I know about litanies?" I thought.) The presence of the Holy Spirit was very real as the Assemblies of God, Methodist and Presbyterian pastors pondered and prayed and shared thoughts and scribbled notes. We put together a beautiful litany in about 30 minutes. We all agreed that God had been with us.

Those same two women once turned the plain old basement fellowship room at my church into a beautiful "sacred space" with drapes and candles and chalices and more as our congregations joined in a Lenten communion service.

My first experience with Ash Wednesday had taken place not long before in the lovely old sanctuary at First Presbyterian. I sat on a polished, dark pew as I listened to an organ and worshipped in silent contemplation. I remember gazing up at a stained glass portrayal of Jesus the Good Shepherd as I stood in line for "the imposition of ashes"--a totally new experience for me. Next year the Presbyterians came to our place for Ash Wednesday. The roof did not fall in.
Our vision team held a three-day retreat at Marcia's beautiful lakeside cottage a couple of hours away. Some artwork now hangs on the cottage entry wall, a thank-you gift from our Assembly of God folks.

We taught a Lenten Bible study together, sang together, occasionally ate lunch, prayed together, talked about swapping pulpits but never did it. I'm sorry about that.

I invited her to attend a concert at our church with a wonderful contemporary band. To my amazement, and slight amusement, the Presbyterian pastor clapped and pumped her fist in the air and raised her hands and shouted "Praise the Lord" like a holy roller. And that despite that fact that she was on crutches, wearing a bulky cast, and was in serious pain.

She planted a large garden so she could give vegetables away, and she opened her home to those in need of a safe place. Once when I needed vestments (AG clergy don't wear them) she opened her church closet and asked me to pick anything I liked. She took our dog when we, broken hearted, had to hastily get rid of her.

Sunday was her last worship service at First Presbyterian. Known for her mediation skills, Rev. Marcia is going to a deeply troubled congregation elsewhere in the state. They have two years to shape up. If I know the Rev. Marcia _____________ she will get it done if anyone can. "I'm called to go there" she says emphatically.

We shed a few tears as we hugged good bye--the Pentecostal and the Presbyterian. My life is changeed. I love you, my sister in Christ, Marcia, and I sure will miss you.
Posted by Dorcas (aka SingingOwl) at 7:00 PM

When people of different denomination "mix" we all gain a new understanding of God and how God works through His Son and Spirit in the world. After all, our window on God is always narrow.

What a great tribute to a wonderful woman of God! I hope her new congregation appreciates her as much as you do.

What a lovely post! The new congregation sounds like just the place that Reverend Marcia belongs and will do well there.

The first pastor I knew was the one who baptized me, at my grandparents home, on Christmas Day when I was 7 weeks old and he was "old" by age standards then - in he late 60's. When he left, I was about 11 and I was too young, too immature to have a sense of closeness to him, therefore, no sense of loss I suppose.

Our next Pastor came here when I was almost 12 - over the next 6 years, he confirmed me, led our youth group and I became an adept babysitter from caring for his three children. My best friend and I wept openly when he left. How our thoughts and patterns of our feelings change so much in six short years.

Since then, we have welcomed and bade goodbyes to several more pastors -one with whom I maintained a good line of communication from 1979 till about a year or two ago when I lost his e-mail address in a computer crash.

Saying goodbye, especially to someone who often knows almost as much about one's inner feelings as you do, is very hard, indeed it is.

Prayers that your friend has an easy transition in there, cause I'm sure the work may be very difficult at first.

What a beautiful post! Friendship is such a gift from God.

Why haven't we met yet?

Oh this is a good post! You know I love it because my best friend is an Independent Fundamental Baptist... We're quite the pair. :)